Obviously this is a weird time for the entire world. In fact, due to the coronavirus, more people are now in “lockdown” than were even alive during World War II.

To pass the time, other than trying a jigsaw puzzle (which we gave up on after a few days… we decided we’d rather have our dining table back… which is a good enough excuse to obscure the fact that a 1,500 piece puzzle with large areas of single colors is a puzzle only fit for someone whiling away the hours on death row, or the certifiably insane), we are keeping busy by engaging in some minor hobbies in addition to my taking long walks in the area surrounding our house.

So even though I haven’t finished the entries for our Luxembourg trip (which seems like a lifetime ago), I thought I’d post photos from my last walk. It’s kinda strange… here we have that one time where you are handed the perfect “That’ll get done when I get around to

it” time, and when life actually gives you that round tuit, you really don’t feel like doing most of those things you’ve been dying to get done. I think we all just need to feel like there’s something more than can always be done, even if we actually never will get around to them.

So thanks for giving me the round tuit, Mr. Coronavirus, but now that I think about it, I think I’d rather have a square one. So I’ll just have to keep putting off those things I’ve been putting off until I get a square tuit. In the meantime: 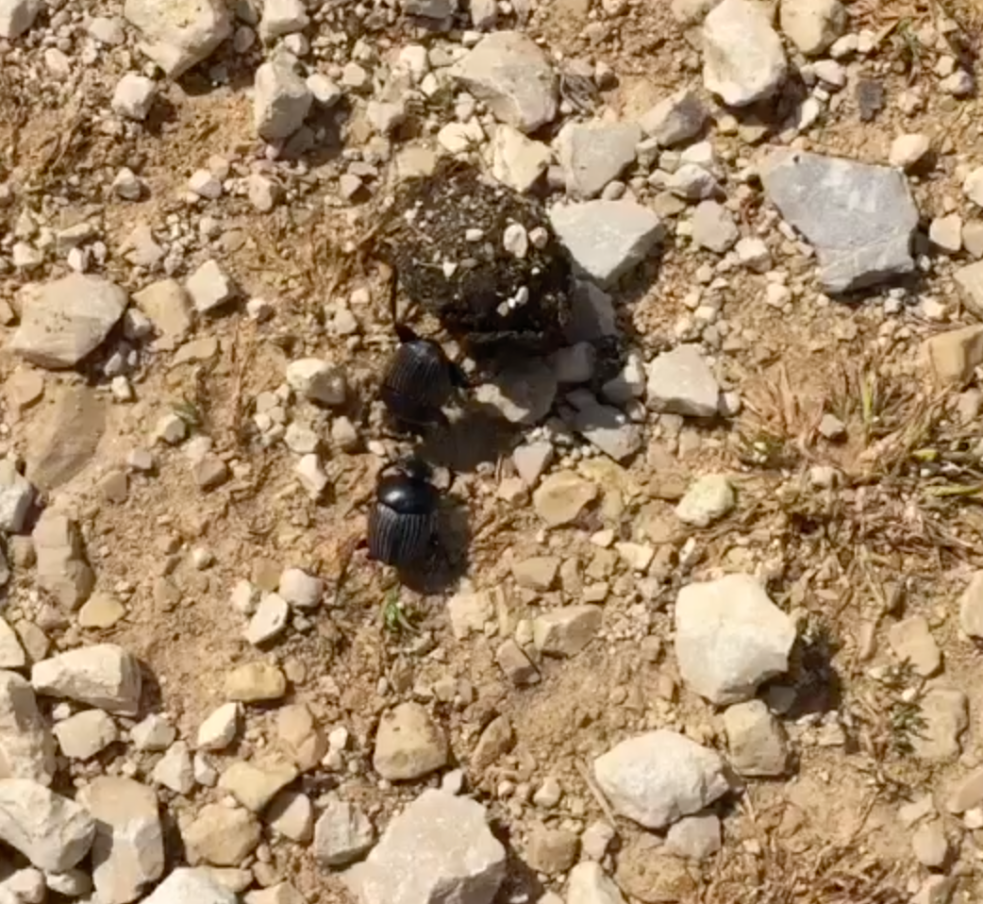 These two dung beetles provided some inspiration for me to make it a long walk. I mean, if one beetle can push a ball of shit five times as big as its body the equivalent of several kilometers, I can certainly add some extra kilometerage to my own expedition, especially since I’m sans ball of shit. Full of shit, maybe. But ball of shit, no. 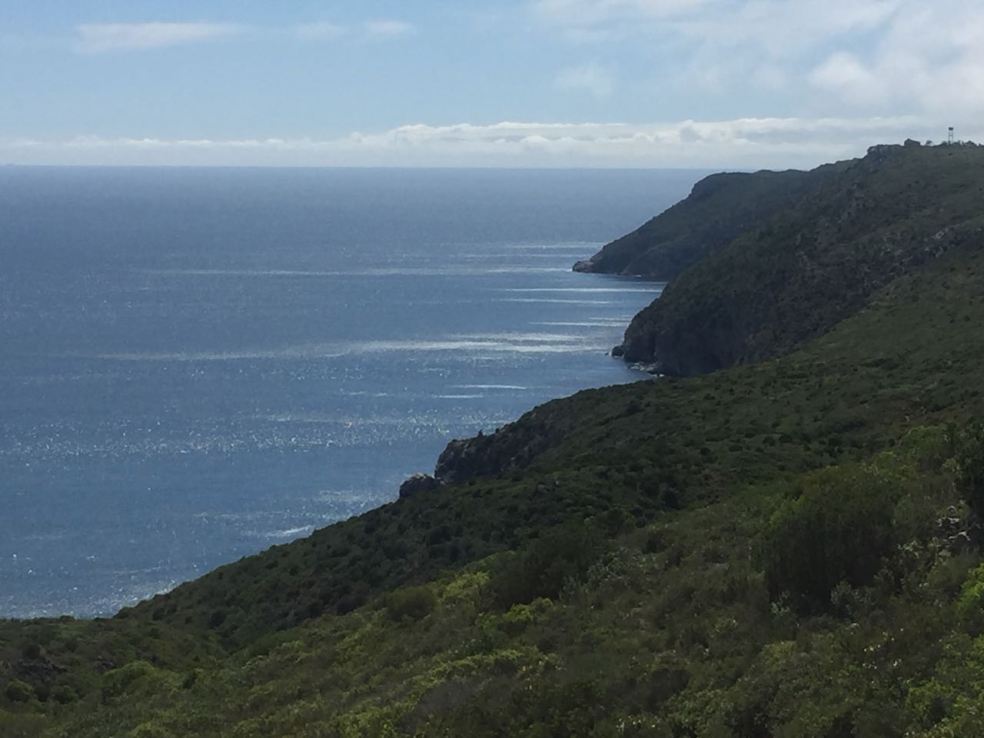 I probably have 50 versions of this scene in my photo library. Every time I start out on a walk and see this, I have to admire it and take the shot.

Here we are looking the other direction after hiking for a while. I know I don’t have this exact perspective already in my photo library so yay! 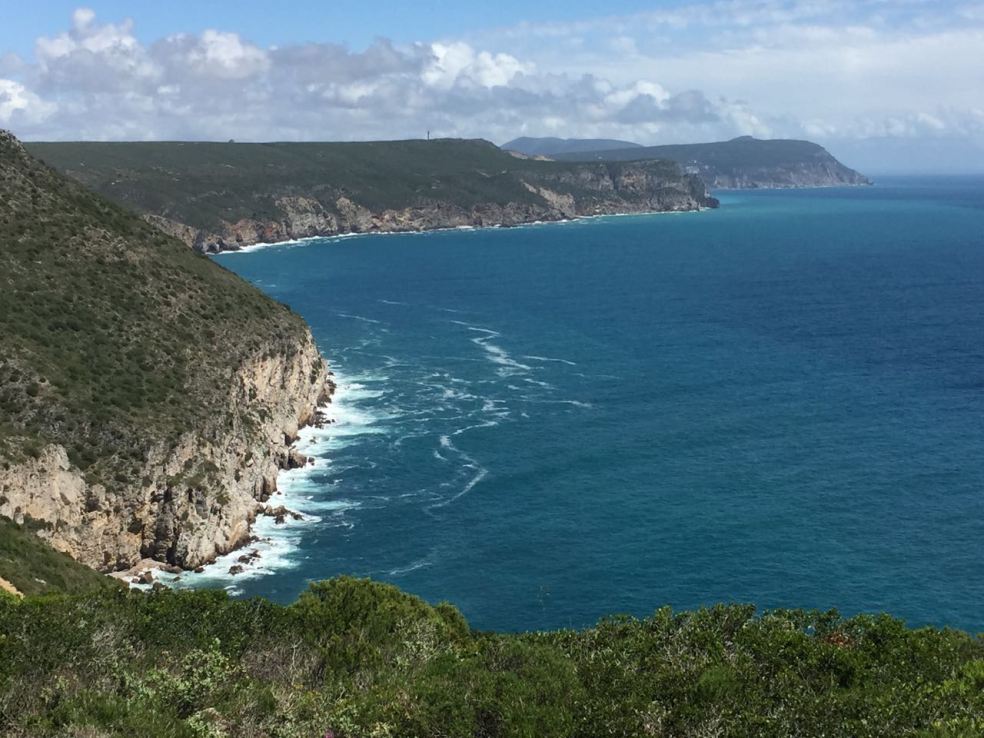 This photo might make for a great jigsaw puzzle scene. That is, as long as someone else pieces together the whole water area. The town of Sesimbra is beyond the first promontory. If you look close you can see a hotel on the second one. Sesimbra is nestled right between the two promontories.

You wouldn’t know it, but before the lockdown it was a rare sight to see this much of the ocean without also seeing some boats. Today, not a one.

The waves crashing against the shore create the only noise you can hear when you’re out walking nowadays, especially in the nature preserve. Well, that and your breathing, depending on the incline you just walked and how many candy bars you ate the previous week.

There are paths everywhere. Despite that, most of the time I encounter no one, in fact almost no living thing at all. However, lately, because of the quarantine, I do encounter more people hiking than I used to. A friendly “boa tarde!” (good afternoon) is exchanged virtually every time, although I’ve noticed the younger people generally prefer “ola!” Or maybe they just want me to give them a cola, I dunno. This different language stuff is hard.

Once you get to the main road (the ocean you can see in the previous picture is beyond the horizon here), there are scattered houses, some of which are abandoned. This home here is in an area with about a dozen abandoned houses in an apparent failed development. Either the developer ran out of money, or they were building in a public nature preserve and the government told them to knock it off. Apparently, after the dictatorship was toppled in 1974, people built all sorts of things where they shouldn’t because the government was in chaos. Eventually, of course, things got under control. 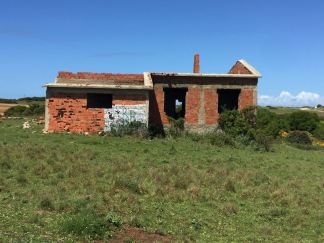 They look a little nicer from a distance. Up close, they’re just shells of bricks and mortar.

Typically, abandoned houses in Portugal just sit and slowly (very, very slowly) dilapidate themselves to death. Since the construction style doesn’t seem to have changed for decades, if not centuries, it’s hard to tell if these ruins are fifty years old or two hundred. But man, you can’t see it so well but this place has a million euro view of the ocean and Lisbon. Amazing to let it go to waste. 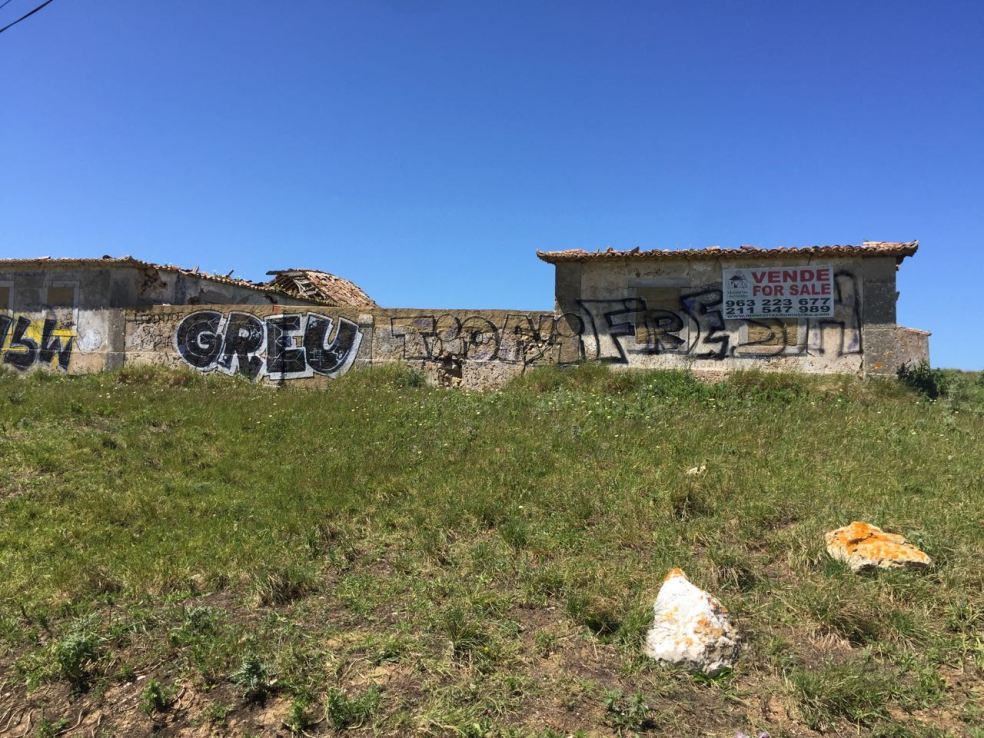 Funnily enough, after they’re abandoned, almost all of them are plastered with “vende” (for sale) signs, often just with spray paint. This one has far more potential than most, obviously, because they get a printed sign in both Portuguese and English, which isn’t very common. Usually it’s just “vende” and some phone number that was probably disconnected in 1993.

This was a great home until that giant bowling ball came crashing through.

You don’t really think of forests when you think of Portugal, but while they don’t compare to the grand expanses of evergreens in the Pacific Northwest, they still have plenty of trees you can wander through. Almost no one in Europe has any idea what a sasquatch or Big Foot is however.

Lately I’ve been going one way through the nature preserve and then returning via the main road, especially now that there are fewer cars out. 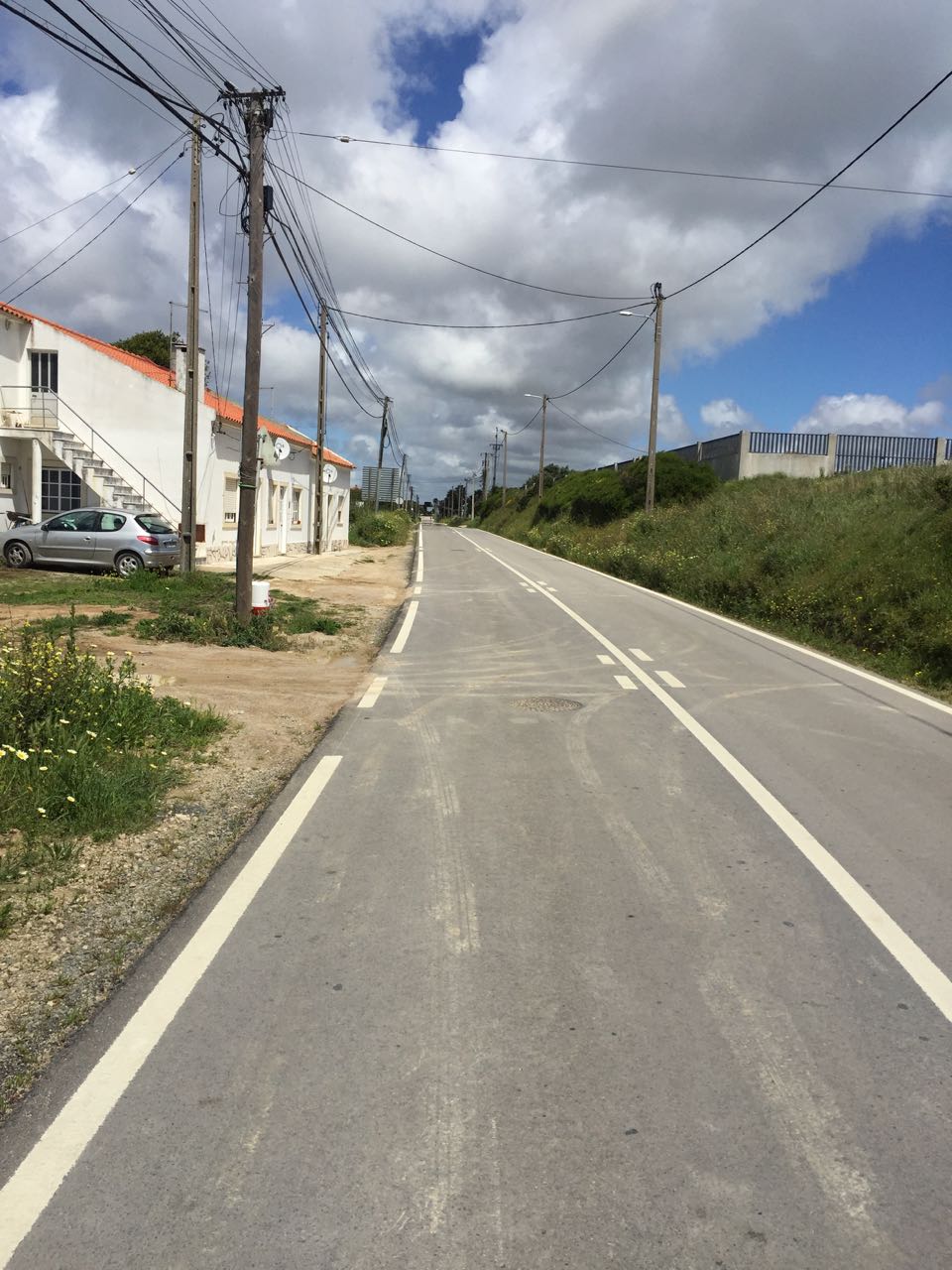 This is normally a fairly busy street. Today, due to the coronavirus, I feel like Will Smith in I Am Legend. There are no zombies though, because it’s daylight. Duh. 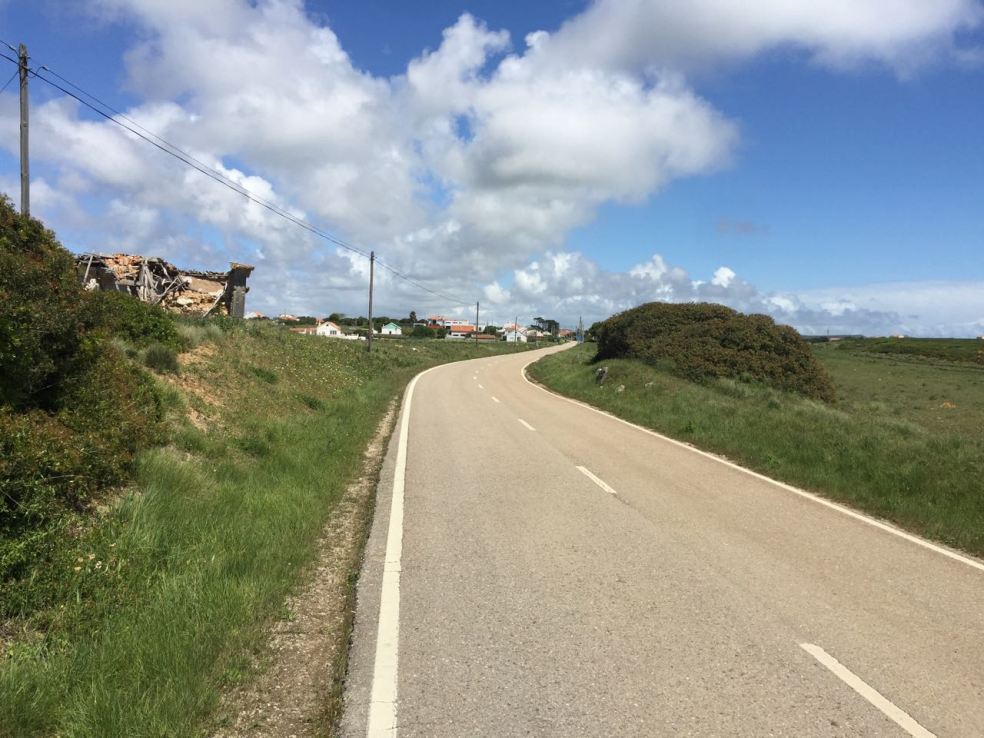 Today, you can just walk and walk in almost total silence (if you tune out the huffing and puffing of course).

But all that silence sometimes makes you wonder if maybe you are in fact the last man on earth.

And then a dog suddenly snarls and barks and lunges at you from behind a fence, clearly desiring nothing more than tearing into your flesh… it’s today’s zombie!

Actually, this is a Portuguese Shepherd. It used to be German, but he emigrated.

Seriously, the main danger I face when taking these walks are from dogs that attack suddenly, constrained only by a fence or chain… usually. Plus I don’t always trust the chain or fence. I’ve never had a problem, but there are plenty of times I’ve encountered dogs running around untethered, and some of them don’t act too happy to see me.

The other danger is from the cars… which is why I’m loving walking that highway right now. In Portugal, a driver will slam on his brakes thirty meters from a crosswalk (nicknamed “zebra” because of the stripes) if he sees someone even start to take a step in its general direction. But perhaps because of some subconscious need to balance the pedestrian vs. car scales of equality, when they pass by someone on the side of the road half of them don’t move their steering wheel at all, and so whiz by while nearly grazing your arm at seventy kilometers an hour.

Which is why I am very careful around houses on that highway… once in a while a dog will come out of nowhere from behind a fence, barking and growling like they’ve been starved for a week, which creates an automatic reaction in my body to jump back. But there are no sidewalks so I’m usually right on the road, meaning I have to make sure I don’t automatically jump back into the road because if I did, and a car was coming at the same time, I’d go from being a meaty dinner for the dog to becoming a pancake for the paramedics.

But, I do get to see some amazing views even while dodging the dangers. Here, Lisbon is off in the distance. Sometimes the views are so clear it just takes your breath away. Kind of a Vista d’ Coronavirus you might say.

This is the view we get after we drive down our side road and stop to turn onto the main highway. While we don’t have that kind of view right from our house, we get to see it every time we go out and about.

But the thing that really gets my goat is, well goats.

For some reason, the grass is always tastier on the other side of the fence. And because they have horns (and don’t know it because they never look at themselves in the mirror), once they poke their head through they sometimes can’t get back out. I had to grab this knucklehead by the horns and twist and turn and fight him until he finally got his head back out. But not only did he not bother to thank me, he just stuck his head right back through again. Fine, eat your stupid greener grass you stupid goat.

“Poupe” was one of the more puzzling and humorous words we encountered when we first moved here. Most gas stations have a big “poupe” sign on them. Now we know it means “save.” We were relieved to learn this, because otherwise we thought all those stores with poupe signs were advertising their toilet facilities, or in this case, how you can somehow create energy by pooping. 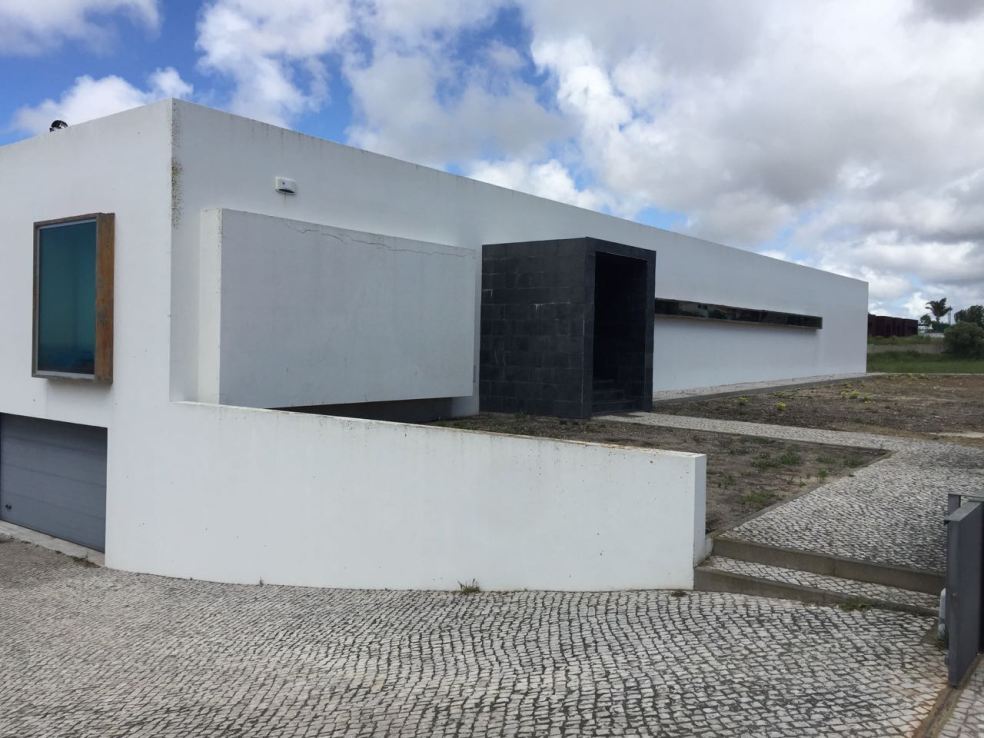 It seems that over 90% of the housing, perhaps all construction, features the beautiful terra cotta tile roofs that make any viewscape of Lisbon so spectacular. But if a builder ever veers from that standard, they pretty much do whatever they want.

Another oddity next door to that one, this looks like a pretty cool house with an amazing view of Lisbon across the water… and yet is apparently abandoned. I’m just waiting for the “vende” to be spray-painted on the wall so I can find out if we can maybe get it for a song. We’d need the big discount just to rehabilitate the yard. Or to buy a goat.

This is an old windmill that doesn’t have to do any work at all for this restaurant right now due to the coronavirus. Where we live is so windy we’re surprised there aren’t some wind turbines in our area (even though Trump tells us they’d give us cancer). Still, Portugal is very progressive with energy, recently producing more power from clean energy sources than it actually needed. Which may be another reason the windmill isn’t running, I dunno.

This is in our neighborhood, and I always find it amusing. Someone built a car ramp right on the edge of a cliff. Let’s hope they never accidentally lurch forward… both the car and driver would end up, well, let’s just say the hospital admittance form would probably use the word “crumpled” in the “patient condition” box.

After a long walk, home sweet home, obscured by the greenery.