One of the great things about living abroad is the opportunity it gives one to meet and make friends with people all over the world.

Most Europeans we’ve met seem to innately understand and appreciate that there are different cultures, languages, religions, and points of view, and that they should all be respected. They also have an intimate relationship with the destructiveness of war and bigotry (there’s nothing like devastating an entire continent to change one’s perspective for a good long time).

Of course, I think anyone who has spent time traveling outside their home town can tell you that for the most part, people everywhere are generally caring and nice when experienced one on one.

We recently joined a group called the “Sesimbra International Community,” which is simply a collection of people living in our area who are originally from outside Portugal. The only other commonality is that everyone speaks English (and most of them Portuguese, along with at least one, two, or three or more other languages). Recently, we got together for a potluck. To represent typical American fare, Carolyn made a casserole, and I made a cherry pie. Yes, we could have been as American as apple pie, but cherries are in season, Besides, I like cherry pie better, and aside from the pitting, it’s easier to make. And neither George Washington or I had to chop down a cherry tree to do it.

We were delighted to find the following nationalities represented (and I hope I didn’t miss anyone): Italian, Mexican, French, Portuguese, British, Australian, and Slovenian.

Chatting with someone from Slovenia for the first time allowed me to ask whether Melania Trump, who is of course Slovenian, is well regarded there. I was told that she is (while allowing for the distorted worldview she surely has when one gets so rich and famous). Slovenia only has two million people, so the Kevin Bacon six degrees of separation thing is probably only about three there. 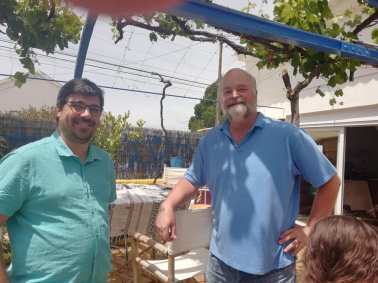 Everyone enjoyed the lunch and all the conversation. We were the only two Americans there, which made it that much more delightful for us, even if I sometimes have to strain through the accents. I’ve never been very good at understanding accents, but I think it’s improving, if for no other reason that almost everyone we speak to has one sort or another.

While many Americans visit Lisbon and the rest of the country on holiday, not that many, percentage-wise, settle in Portugal, and in fact very few Americans live in Sesimbra. As a result, sometimes we feel like we are scrutinized a bit as everyone tries to figure out what these crazy Americans are all about.

Like in so many social interactions in the U.S. today, politics tends to come up in most conversations. What I almost always hear is that everyone is pretty puzzled by what’s going on there today, especially because America has long been a country well regarded by most Europeans.

The Portuguese in particular see America through the lens of movies (almost all the movies shown are American with Portuguese subtitles) and other pop culture, as well as of course through the world news, which is often dominated by the U.S. They generally seem to look up to America as rich, successful, and powerful. But now they are a little baffled as to how this very powerful and rich country elected someone like Donald Trump. I still have yet to find one European who even remotely likes or respects him. When the topic first comes up, I notice most Europeans are initially cautious about it. They don’t want to offend me, if I happened to be a Trump supporter. When I’m able to confirm that I see the same things they see, I usually perceive a palpable sense of relief, and the conversation opens right up.

My analogy about it all is that it’s a lot like finding out your parish priest is a pedophile. Suddenly everything you liked about that priest and church is called into question.

Speaking of pedophilia (something so heinous that even among the worst of the worst in prison, pedophiles are considered scum), in America you can even be a pedophile and still be given a pass simply because you’re rich, famous, or talented (and not in prison). As a comedian we recently watched pointed out, Charlie Chaplin (he married both a 16 and 17-year old) and Elvis Presley (he first met Priscilla when she was 14) were both technically pedophiles. There is also Woody Allen and Michael Jackson as well. Closer to home, my late wife Dolly was abused by her father throughout her childhood years, and that awfulness still reverberates around that family.

And yet Elvis and Charlie Chaplain still command some degree of respect from most Americans. Which begs the question, just how talented, rich, and famous do you have to be to get away with raping a minor? I guess Elvis and Charlie have answered that question. 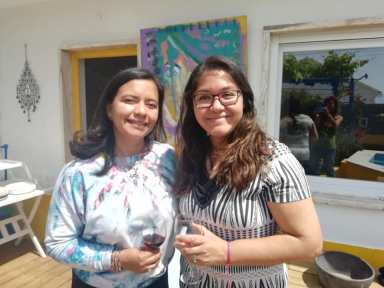 While Trump isn’t apparently a pedophile (although his very creepy comments about his daughter, including: “…If I weren’t happily married and, ya know, her father….” and “Is it wrong to be more sexually attracted to your own daughter than your wife?” are comments that make you wonder once you’re done being totally creeped out), his other sins are many. But because he’s rich, famous, and promoting a conservative agenda, it’s apparently all okay.

It’s hard to explain to anyone who isn’t American that the American culture has lurched headlong into one that worships two things above all else: money and fame. If you have both, you can pretty much do whatever you want, and many of the rest of people will even clamor for you, even if you’re a known liar like Trump (with a documented 10,000 lies and counting). But he’s also a known cheat (any serious golfer knows if you’re a golf cheat, you’re pretty much a low-life), philanderer (anyone doubt that?), self-professed pussy-grabber, bigot (obviously), and name-calling narcissist (double obviously). Everyone in the world sees this, and can’t imagine what’s going on with America. I mean, come on!

Seriously, if you need a guy like that to champion your agenda, shouldn’t you think just a little teensy bit about whether your agenda needs a little re-thinking?

Most Europeans express those sentiments in a variety of ways, and remain perplexed, because they love America, and don’t understand how it has gotten so far off track.

In the end, the world is a lot nicer place when people from all over the world come together and recognized that we’re all just human beings. Experiencing it in our little town of Sesimbra was a welcome reminder of all that.