It occurred to me the other day that Carolyn and I are actually now living that exact fairy tale ending. We didn’t feel that before because we always had another adventure awaiting us. We were to go to Spain and Mallorca next, with the rest of Europe beckoning, just as it has ever since we arrived.

But then Mr. Covid scuttled those plans as well as all other traveling in the near future.

So we’re simply living life one day at a time. Since we’re retired, we essentially have no increments of change or excitement to look forward to. This is our life without travel. No wonder old people just talk about their health! I promise I won’t bore you with that here; suffice it to say once you are well into the second half of your life, pieces of your body just start falling off without warning, and other parts you didn’t even know existed start hurting for no reason at all. Plus doctors want to just start removing organs because the organs apparently get tired of doing whatever it is they were tasked to do in the first place. So treasure your youth when you have it, because no one wants to tell you the ugly truth about what it’s like when that’s gone. And we won’t be the first. Just be afraid. Be very afraid.

Otherwise, Carolyn and I are getting along great and we’re keeping ourselves occupied and entertained, even if it’s with activities whose descriptions would offer absolutely no interest to anyone else whatsoever. The interesting thing is that we’re in a sort of steady routine… it’s hard to tell one day from another; we have no touchstones to even know what day of the week it is. We have had more than one conversation where one of us thinks something is going to happen tomorrow and we both get confused until we realize that I thought it was Monday and she thought it was Thursday but it was really Saturday, plus whatever I thought was going to happen on Tuesday already happened last Friday but I forgot all about it. Then of course neither of us can remember what we were talking about in the first place.

Welcome to Happily Ever After!

So anyway, one of the results of being in a routine is that doing anything outside said routine is viewed with some suspicion or unease. Just like this blog. I still hadn’t finished my entry for our trip to Luxembourg… somehow with no further plans on the horizon and the blogging itself being outside of the routine, I just kept putting it off and putting it off. I may not even remember what the pictures were! But, dammit, I’ve gotta get it down before we forget it all, so without further ado, here is the next entry from our trip:

Vianden Castle gets its very own entry because 1) we took a lot of pictures, 2) I’m breaking out of my routine by doing this blog so I can only handle one topic at a time because it’s just all so weird now, 3) it is one of the most impressive castles we’ve ever visited; indeed, it’s one of the largest and finest fortified castles west of the Rhine; in fact, CNN included Vianden on its list of the 21 most beautiful castles in the world. And most importantly, 4) the photos were in the first folder I saw on my computer.

Vianden Castle was built between the 11th and 14th Century on the foundations of a Roman castle and a Carolingian refuge, looming over the quaint town of Vianden like a shepherd guarding its flock.

One little known fact about the town of Vianden is that they used hobbits as slaves. We know this because of the size of the doors where they lived beneath the homes. 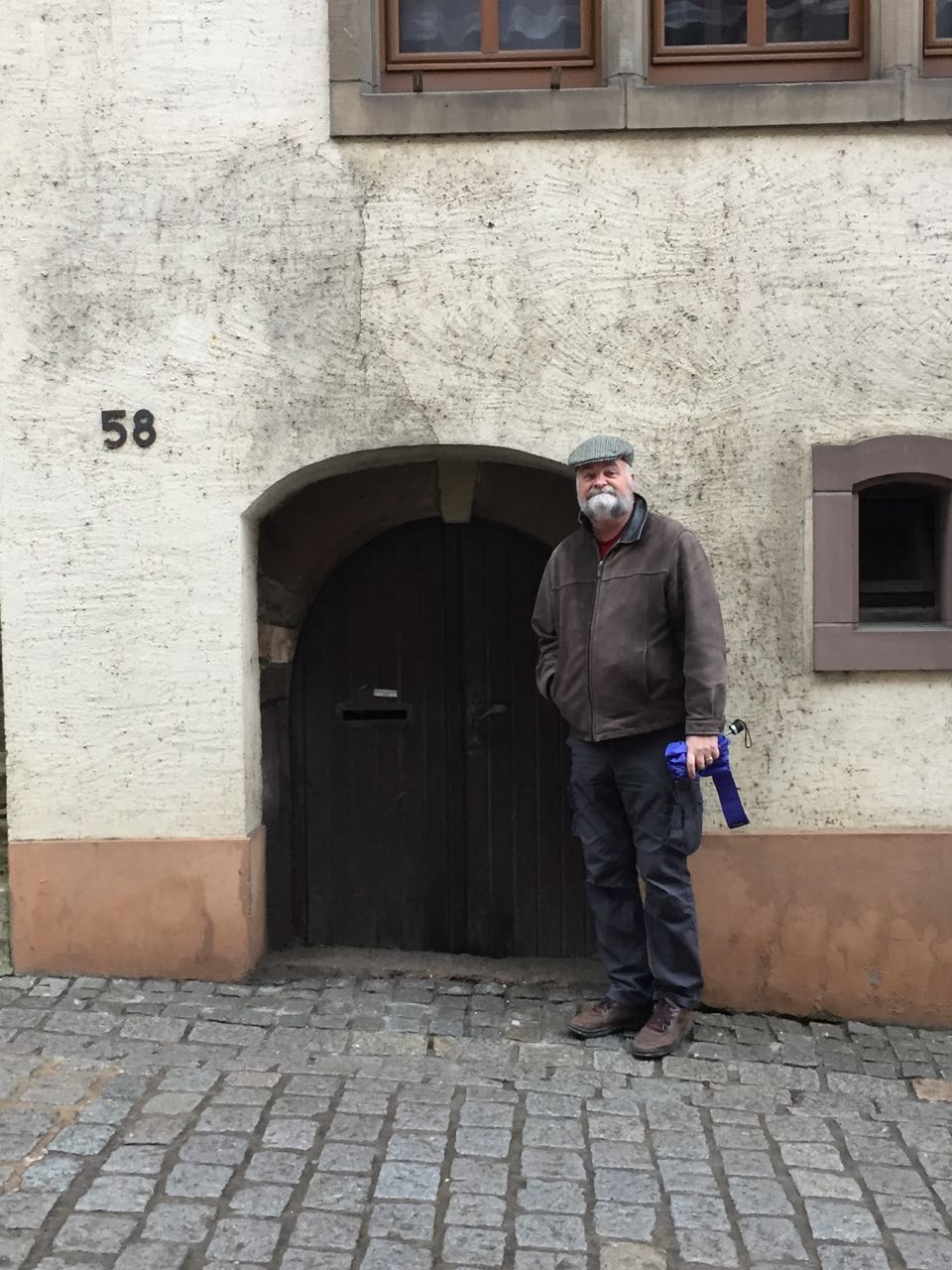 Some of the hobbits eventually earned their freedom and so were able to live in nicer places, often labeled with a “58,” which, as everyone knows, is a numerical code for “hobbit,” because there are six letters in “hobbit,” and 6 is between 5 and 8, and the word “eight” ends in a “t” just like hobbit, and 8 minus 5 is 3, times 2 is 6, and that’s exactly how many letters are in hobbit! I mean, you can’t just make these eerie coincidences up, right?

One of the hazards of waiting so long to blog is that now neither of us remember if this was a church inside the castle or inside a church in the town. Heck, maybe it’s not even in a church, it could be part of an Oompa Loompa factory. Anyway, a picture’s worth a thousand words so make up your own.

We do remember this was a kitchen inside the castle. Funny how one always remembers specifics when it comes to food, huh?

You can get idea from this tower just how long Rapunzel would have had to grow her hair to escape. Of course, she wouldn’t have gotten far, dragging twenty pounds of hair thirty meters behind her. A pretty stupid story, really. But it had a really hairy ending.

In 1820, the Dutch King Willem I sold the castle to a businessman, who promptly sold everything, including all the doors and windows (true story… I know you think I make lots of things up, and sometimes I do. But if I say “true story,” then I’m not. Most of the time anyway). After this, Vianden Castle fell into decay and became a doorless and windowless ruin.

In 1966, restoration started, and in 1977 the Grand Duke of Luxembourg transferred it to State ownership. By then large parts of the castle had been rebuilt based on old images.

Vianden Castle is now a museum and is also used for official State occasions.

A view of the town of Vianden from the castle. Isn’t that the very definition of quaint?

And it gets even quainter with other views. In fact, it’s downright quaintalicious! 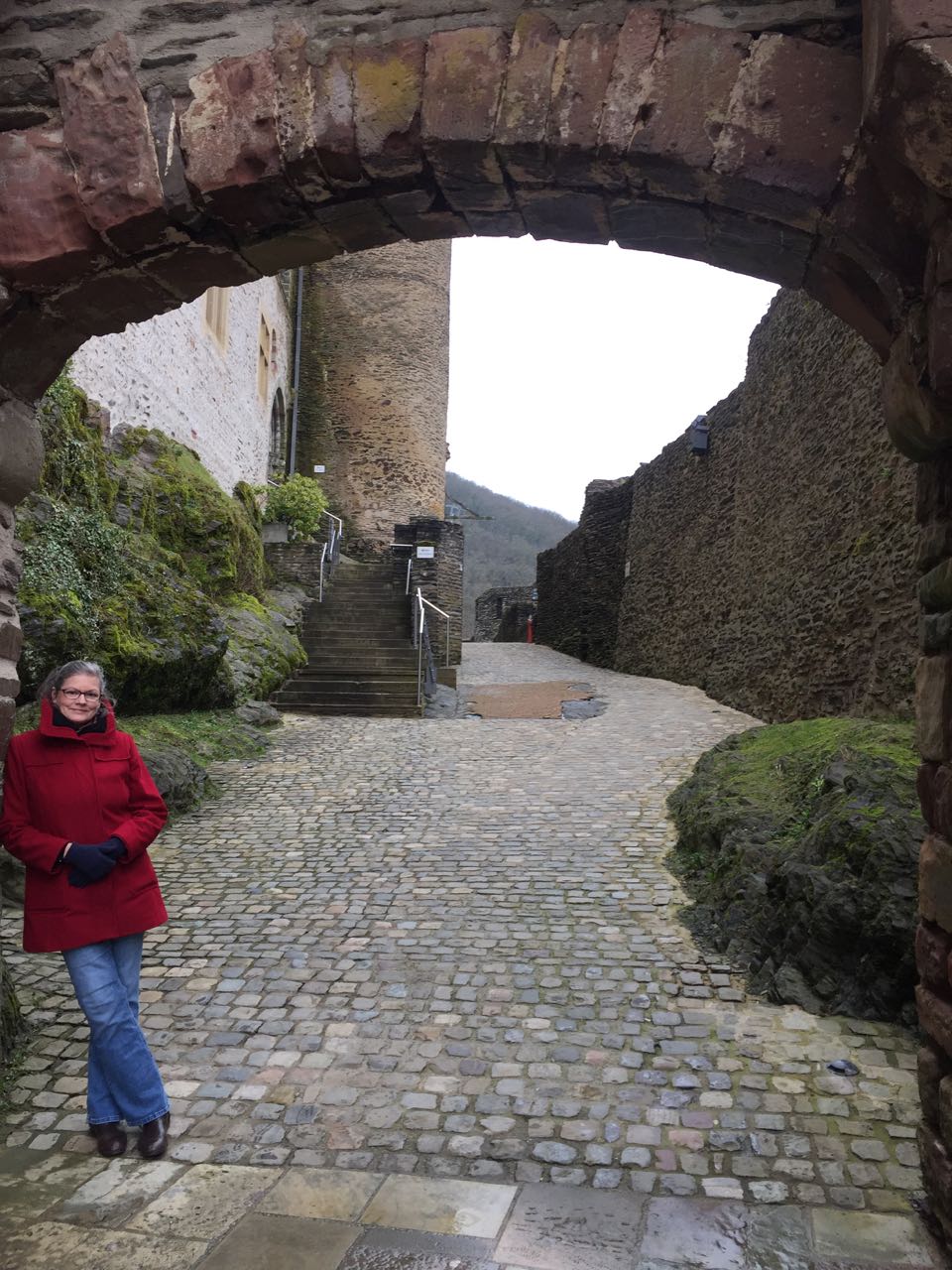 Just imagine this place as it was in the 14th century with masses of unbathed people jostling around horses and their inevitable poop, and knights tromping around inside metal cans with no place for their sweat to go except into their iron shoes. The middle ages always makes me wonder how our sense of smell didn’t devolve and disappear as a result of simply being overwhelmed. But, maybe their noses figured out how to just be whelmed. Hence, the term “nosewhelm.”

Which is a word I just made up but I had you going for a second, didn’t I?

Fortunately, there was no historical scratch and sniff on the tour so I just basked in Carolyn’s perfume. She always smells very nice. 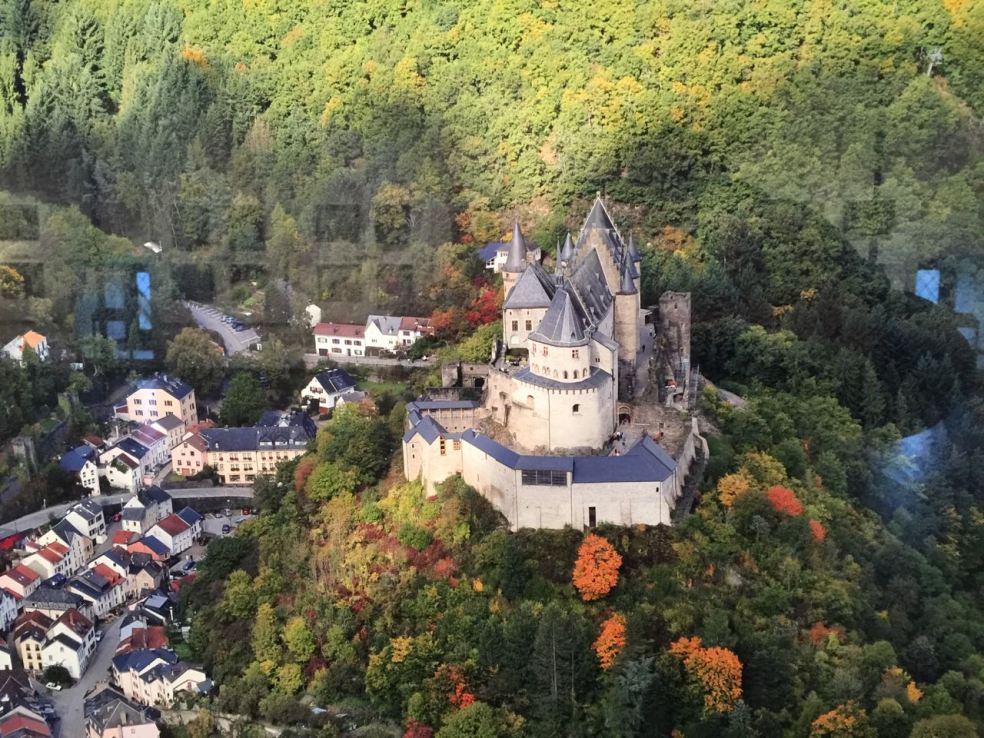 How did I get this picture of the castle you might ask? Did they have balloon rides? Did I hurl my phone in the air as far as I could after pressing the auto-click camera button? It doesn’t take much of a super sleuth to notice some strange ghosting in the image, however. Is that a ghostly building in the shadows? That’s actually a reflection; this is a picture of a picture that was on one of the walls in the castle and it’s a helluva lot better than anything I could shoot so there you go.

There’s a cute little balcony for some Romeo and Juliet-style romance.

And here’s my own personal Juliet giving you some perspective as to just how immense the castle is.

Of course, forty years later, Romeo is sitting at one end of the table for dinner, Juliet is on the other, and they’re barely speaking. Living happily ever after my ass.

Wells can be a very deep subject.

I’m thinking that fireplace, as big as it might be, really didn’t put much of a dent in the cold air in this room during the winter. At least the knights could keep their nuts warm. Actually, I couldn’t find any reference to nuts native to Luxembourg, so maybe they were just keeping their barley warm. True fact: Middle Ages food for poor people revolved around barley. Grain provided about three quarters of their calories in the 14th century. That seems like barley enough. Doh! I oat to know better. 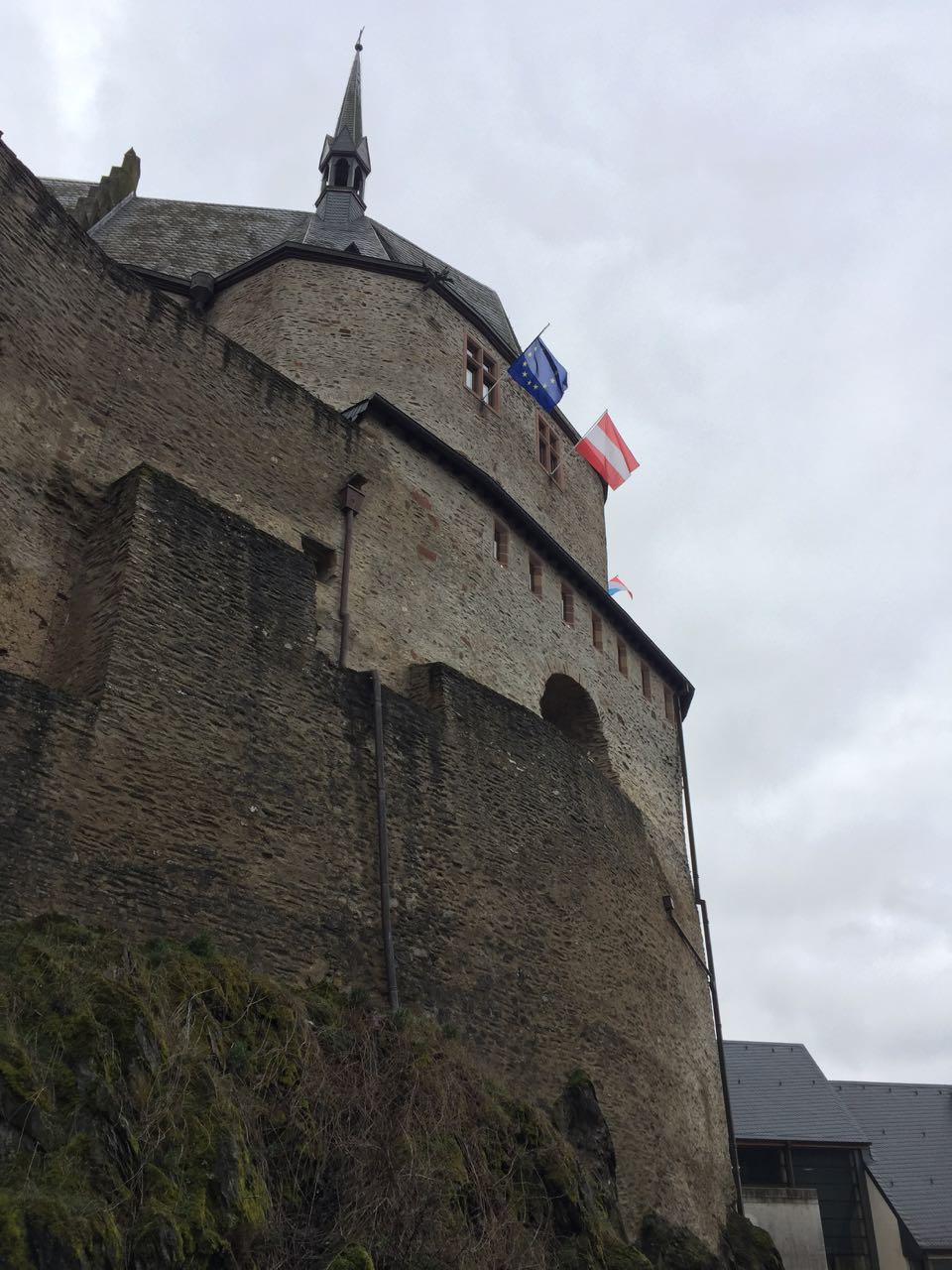 Not an easy thing to conquer especially if you’re wearing 15–25 kg (33-55 pounds) of armor. A funny joke would have been to line the walls with magnets.

This is the exact same face she made when I told her Trump won the election.

The town of Vianden is very small and quaint, and we were delighted to discover that there are a lot of Portuguese in Luxembourg because the pay is so much better. So while we don’t know a lick of Luxembourgish, and Carolyn only a little French from high school, we were able to communicate with the Portuguese because of our knowledge of, well, English. They spoke English well so we didn’t have to torture them with our Portuguese.

While in Luxembourg we talked with a number of Portuguese. The general theme was “Luxembourg is nice, but we really miss Portugal.” Plus they confirmed what I wondered… sure it’s nice to earn more, but everything costs more too. They all seemed a little homesick to me.

Still, it’s a very cute town, even if it was almost completely devoid of tourists because we were the only ones dumb enough to be touristing as the Covid pandemic started to hit. But hey, we didn’t catch anything because that meant there were very few people to catch it from even if they had it! So who’re the dumb ones now?

This was our plan for visiting the castle and town. No, seriously, the castle is also the sight of one of the most important battles of the Luxembourg Resistance during World War II. They actually fought inside the castle. This is what Wikipedia says about the battle:

On Sunday morning, 19 November, the Germans attacked the town with 250 soldiers of the Waffen-SS. After bombarding the town and the castle with grenade launchers the German soldiers began to attack the castle itself which was defended and fortified by four members of the Luxembourgish militia.

After heavy fighting around the castle, six German soldiers breached the defences via the gate of the castle, only to be involved in house-to-house fighting inside the castle. After sustaining several casualties, the Germans withdrew from the castle and concentrated their force on the town, but the strong resistance offered by the militia forced the Germans to abandon their assault and withdraw to the other side of the river to Germany.

Eighteen German soldiers were killed during the main battle. The 30 men of the Luxembourgish militia suffered only one dead, with three being seriously wounded, and three more slightly wounded. A single civilian was killed when a grenade exploded in her home.

When the Germans launched the Battle of the Bulge a month later, the 30 men of the Luxembourgish militia, being hopelessly outnumbered, abandoned Vianden and withdrew to the unoccupied south of the country. Most of them continued their engagement by helping the U.S. Forces during the battle.

Ah Vianden, such history, such beauty, we are honored to have seen ya. 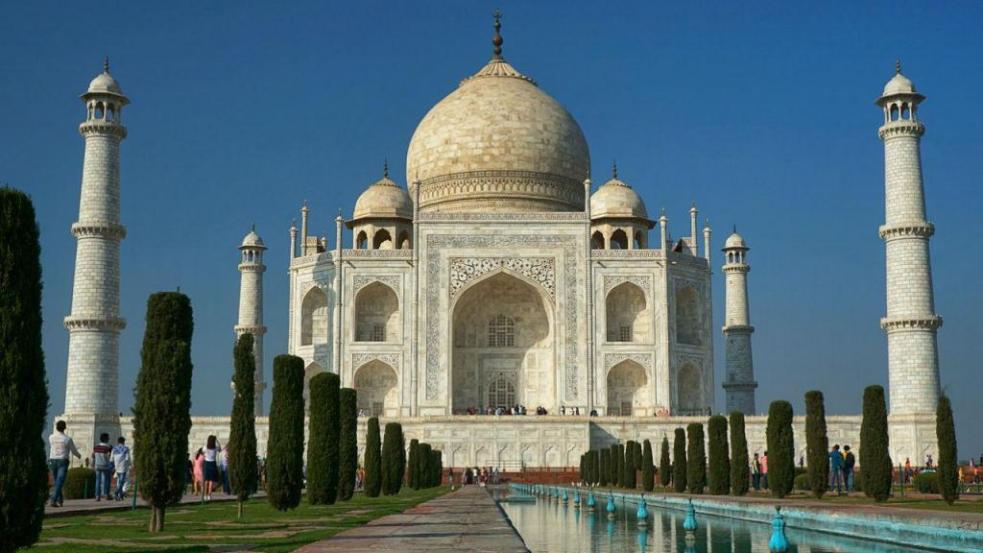 Oh, and here’s the Taj Mahal for my daughter Cortney. An inside joke. We’ll see if she gets it.