As soon as Carolyn showed me a picture of this tiny French island with a monastery on top, I knew we’d have to visit it.

It’s one of the most striking constructions I think I’ve ever seen. It just sits out on an expanse of sand like a gigantic jagged molehill. When the tide comes in, the entire thing ends up surrounded by water. Fortunately, it’s a little sturdier than any sand castle I’ve ever built, so when the tide goes back out, there it stays, standing there as it has for nearly 1,000 years. 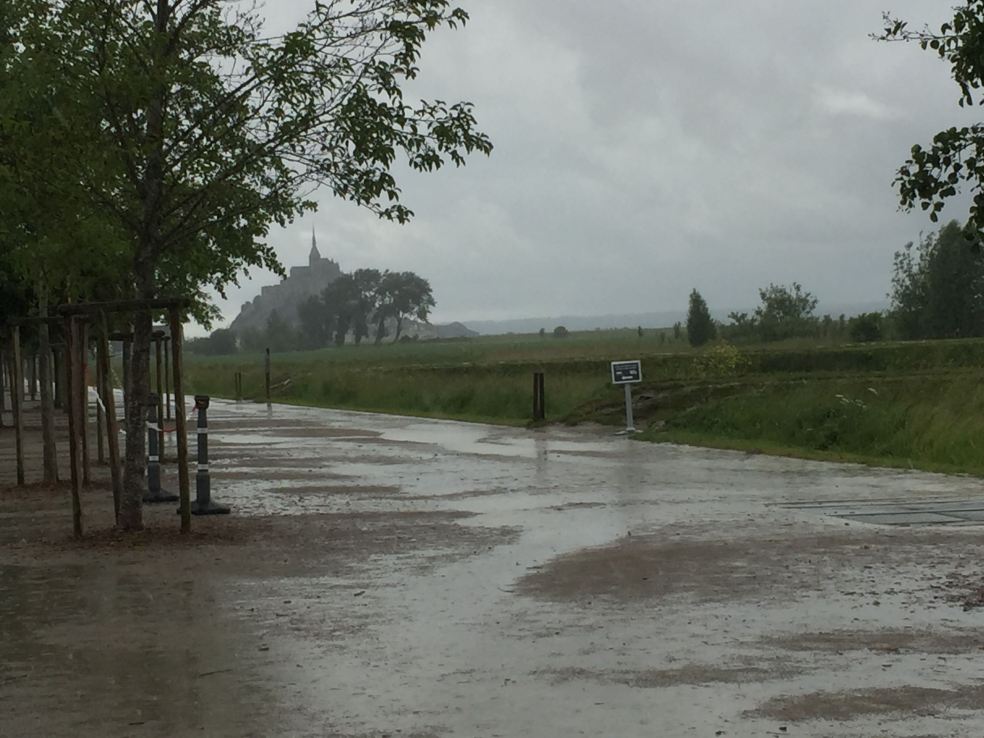 To get there, you first have to catch a bus from the parking lot, which we were grateful for because it was a bit of a rainy day.

But even through the mist and the rainy windows, you can’t help but be impressed as you approach. 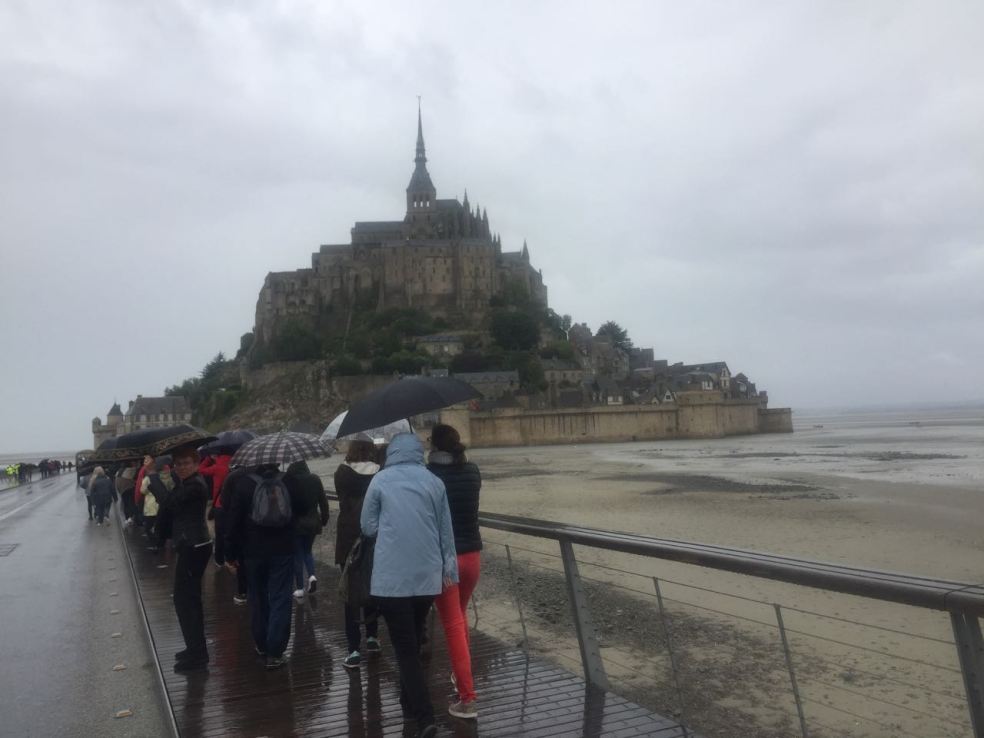 Once you get off the bus, you still have a walk on the long walkway that connects the island to the mainland.

But we were smart enough to bring an umbrella, so the water didn’t dampen our spirits any.

As you approach, the abbey looms above you like a gigantic haunted house.

Which apparently didn’t scare the smiles off our faces.

Upon entry into the town, you’re greeted by a cute little avenue lined with merchants hawking all sorts of touristy goods. It almost looks like something you’d see in Disneyland.

Including doors that look like they were made for Mickey Mouse. 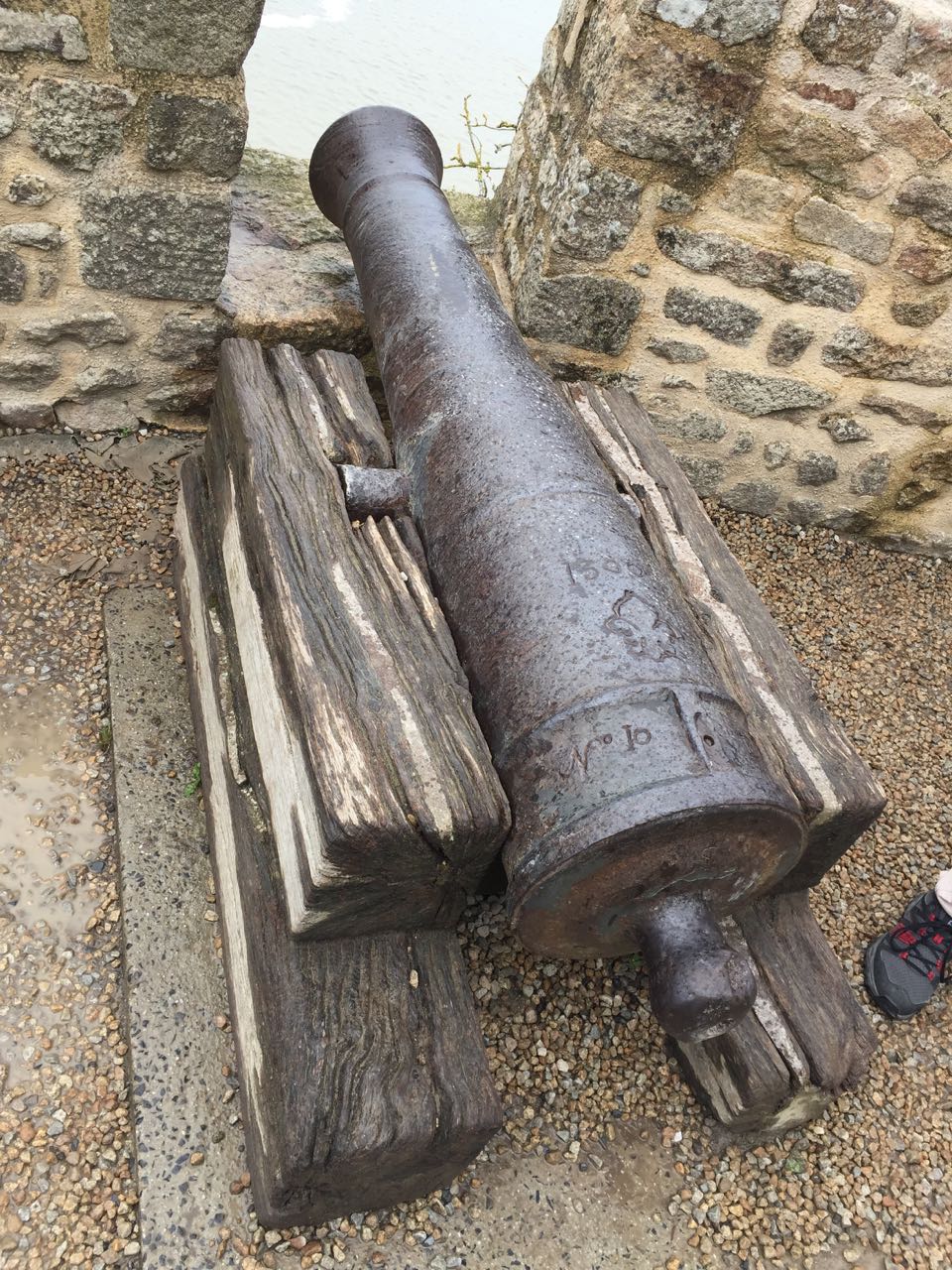 The island has supported strategic fortifications since ancient times.

Since the 8th century, it has been the seat of the monastery from which it draws its name.

Once you’re in, they really don’t want to let you back out, because the island only has about 30 permanent inhabitants. But since neither of us can make or bear any children, they eventually did let us go.

It actually was a prison for a time, sort of Alcatraz-like due to its location. I doubt the prisoners were this cheerful, generally.

The island’s location is so strategic and defensible that when the tide came in, any attackers were stranded, drowned, or driven off. Maybe they should have called it Mont-Saint-Moses.

These victories left the occupants, especially the king on his throne, feeling rather smug.

The island remained unconquered during the Hundred Years’ War; in fact only a small garrison was needed to fend off a full attack by the English in 1433.

During the Hundred Years’ War, England made numerous assaults on the island but were unable to seize it due to the abbey’s strong fortifications.

Mont-Saint-Michel is visited by more than 3 million people annually. Well, now 3 million and two. France protects over sixty of its buildings as historical monuments.

This is either a fireplace or where they roasted their enemies for lunch. 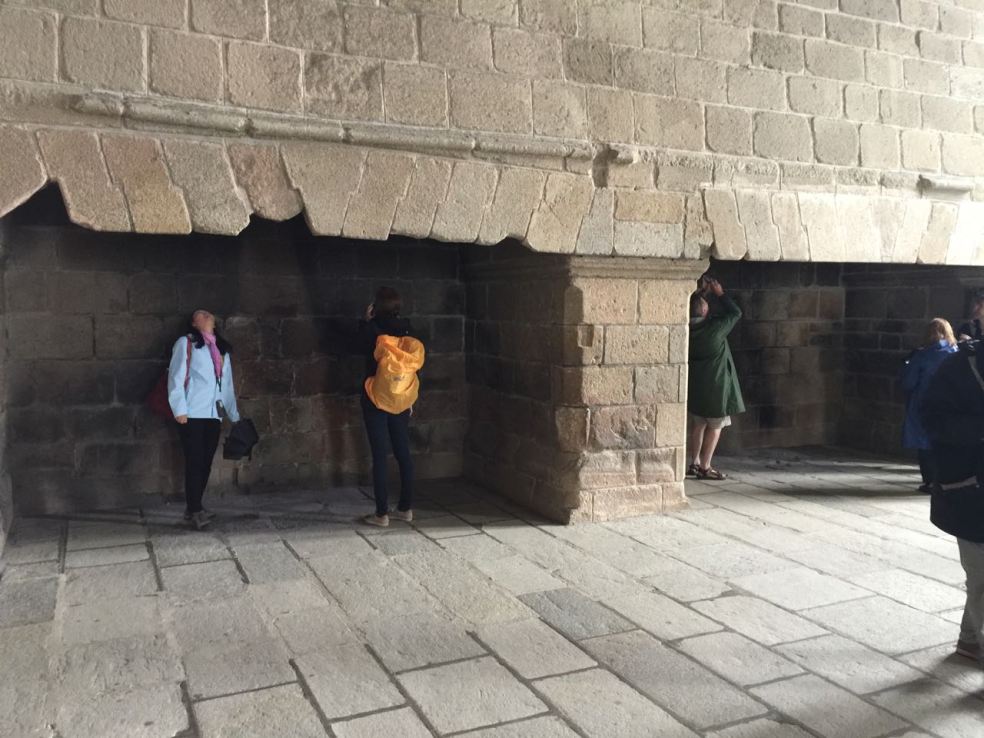 I think it might be the latter. Here, they would be preparing Asian cuisine.

The original site was founded by an Irish hermit, who amassed a bit of a following, one that began dublin’ every year or so, ire-ronically.

The salt marsh meadows surrounding the island were found to be ideally suited to grazing sheep. The meat that results from this diet makes agneau de pré-salé (salt meadow lamb), a local specialty. We didn’t know that then, which now makes us feel a little sheepish..

I think this might be a statue of St. Michael, but I’m just winging it. According to other people who were also winging it, the legend is that the archangel Michael appeared to the bishop of Avranches and instructed him to build a church on the rocky islet.

In 1067 the monastery of Mont Saint-Michel gave its support to William the Conqueror in his claim to the throne of England. He rewarded that with properties and grounds on the English side of the Channel, including a small island off the southwestern coast of Cornwall which was modeled after the Mount and became a Norman priory named St Michael’s Mount of Penzance.

It’s nice that they put a putting green in, but I couldn’t find any flags. Or putters. Or golf balls. Silly French peoples. 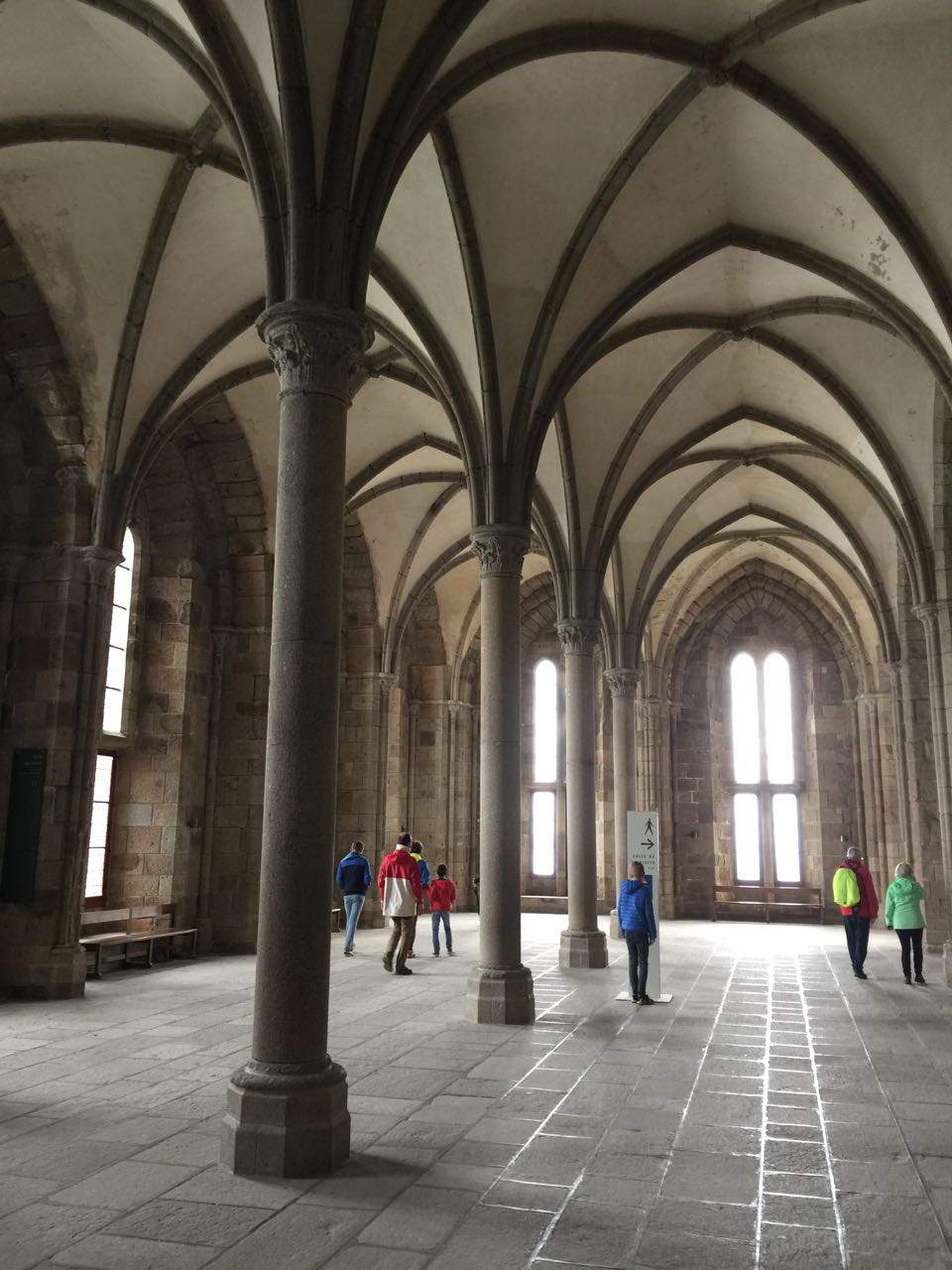 This room is called, “Crypte des gros piliers,” although the pillars didn’t seem very gross to me.

Except they are kinda gross as hiding places. 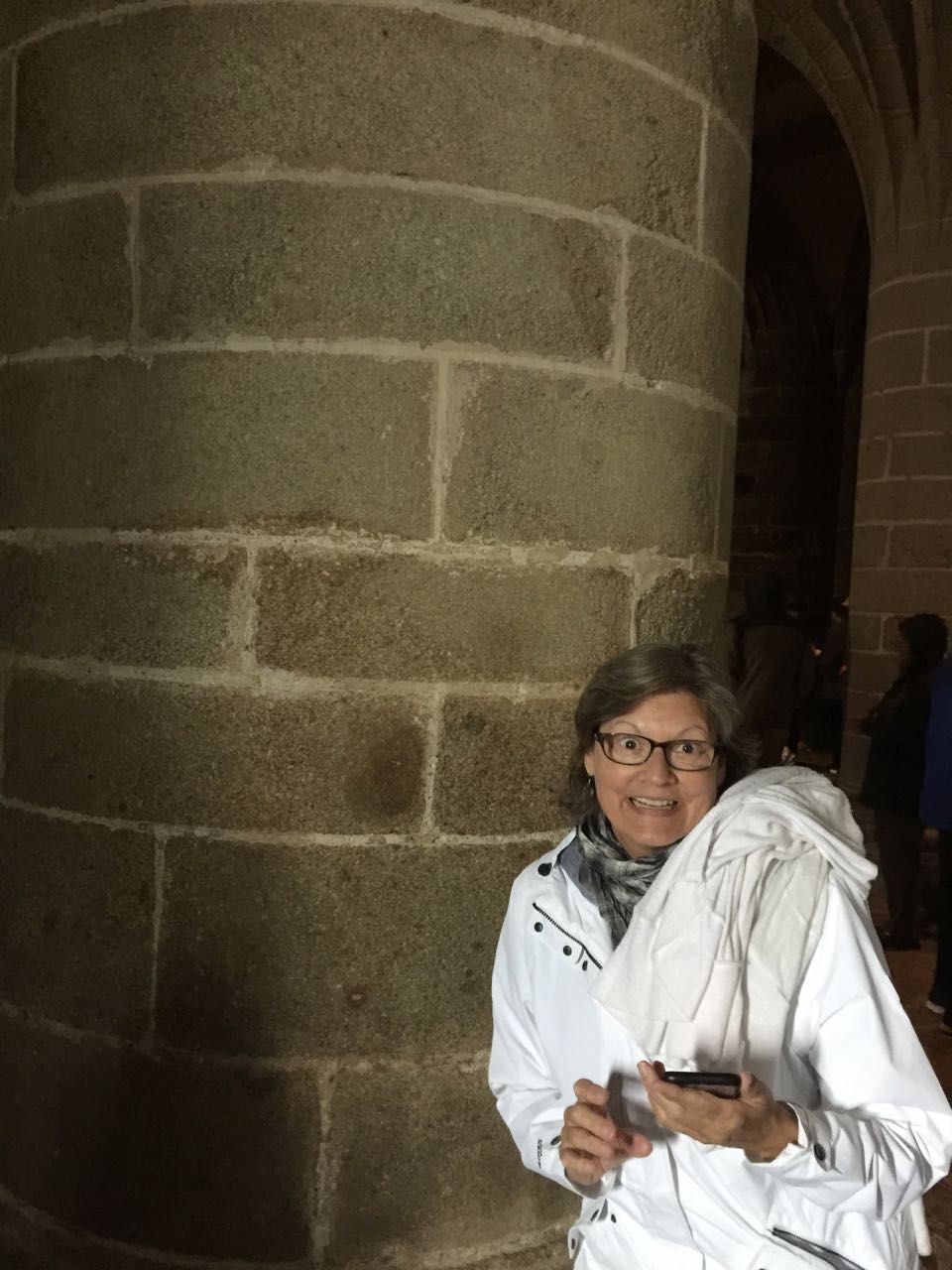 Carolyn was excited to learn that Mont Saint-Michel was the inspiration for the design of Minas Tirith in the film The Lord of the Rings: The Return of the King.

It also served as the artistic inspiration for the Disney movie Tangled. 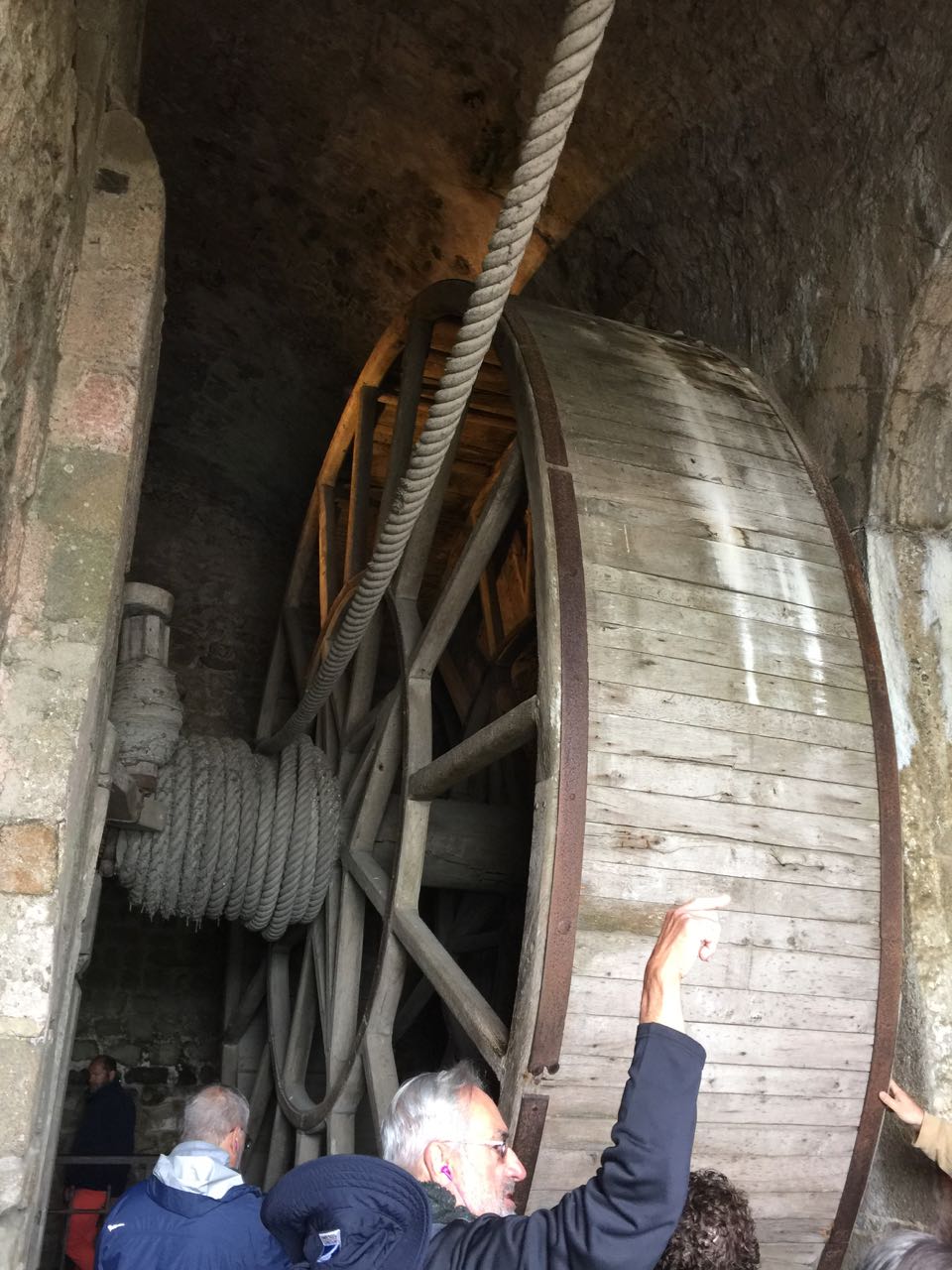 This device is cleverly called “The Wheel.” They used it to haul up supplies and VCRs so they could watch The Lord of the Rings and Tangled.

The door of the day.

There are about fifty shops for the three million annual tourists. 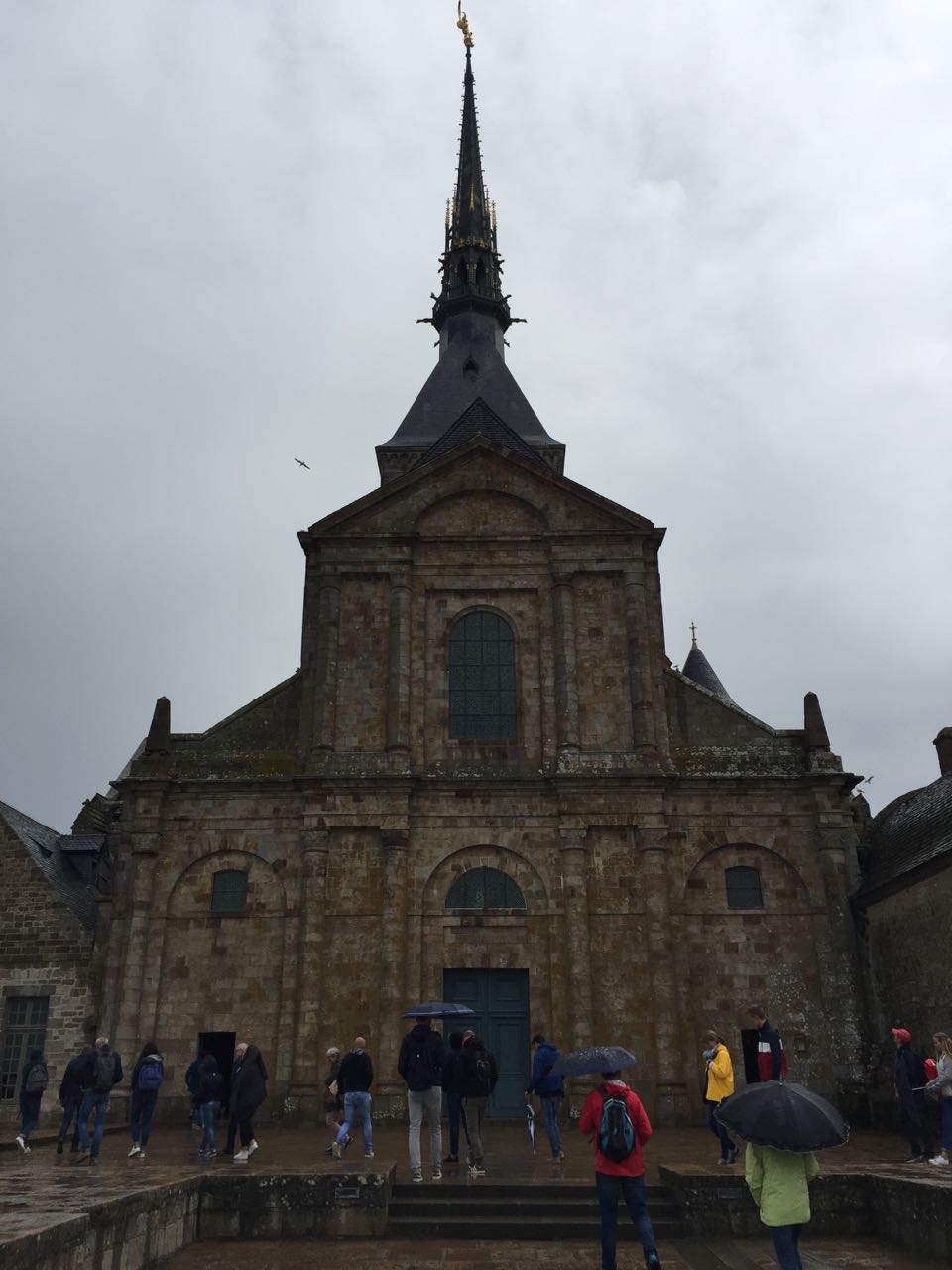 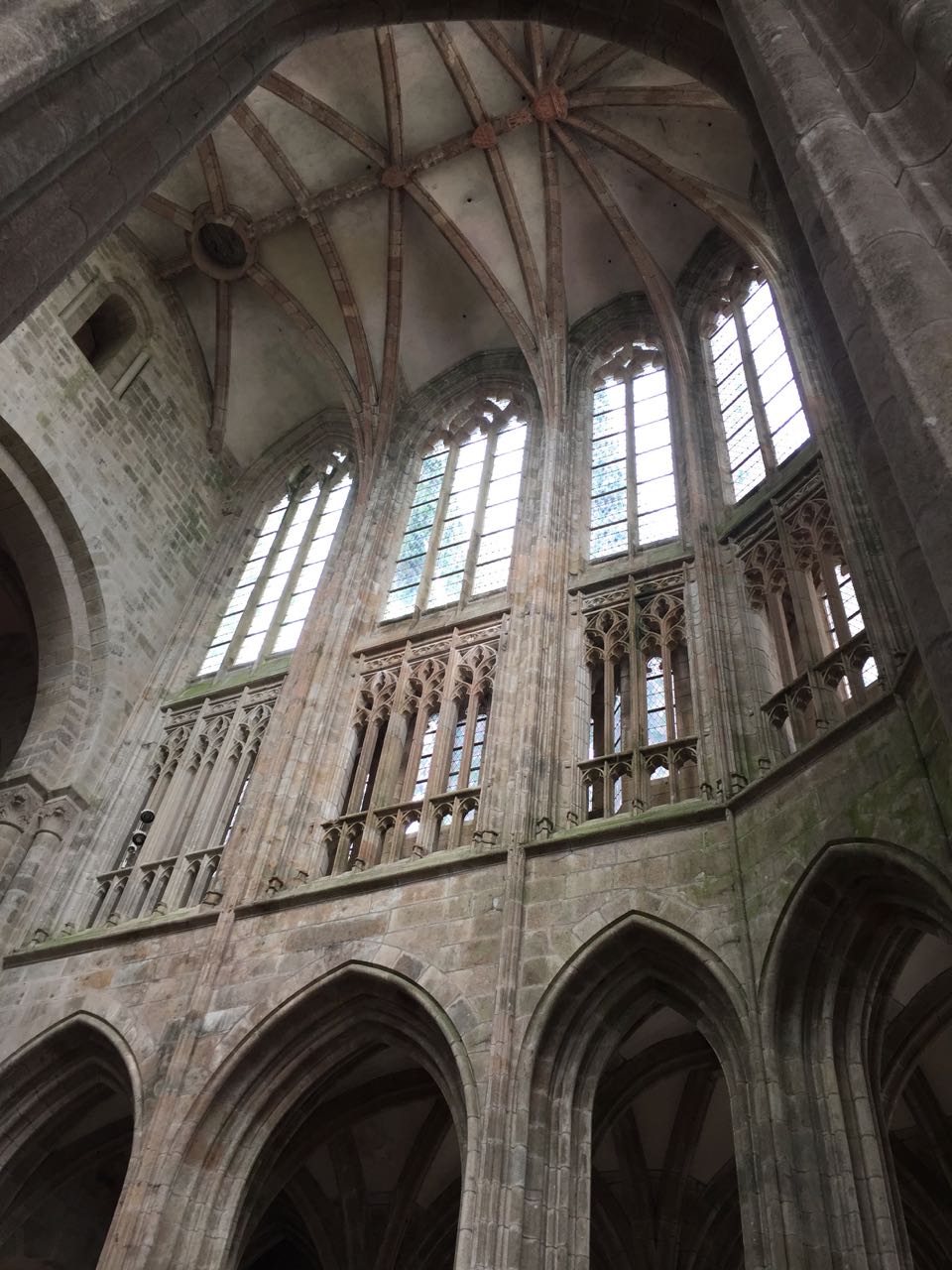 The church is at the very top of the island, signifying God being above. 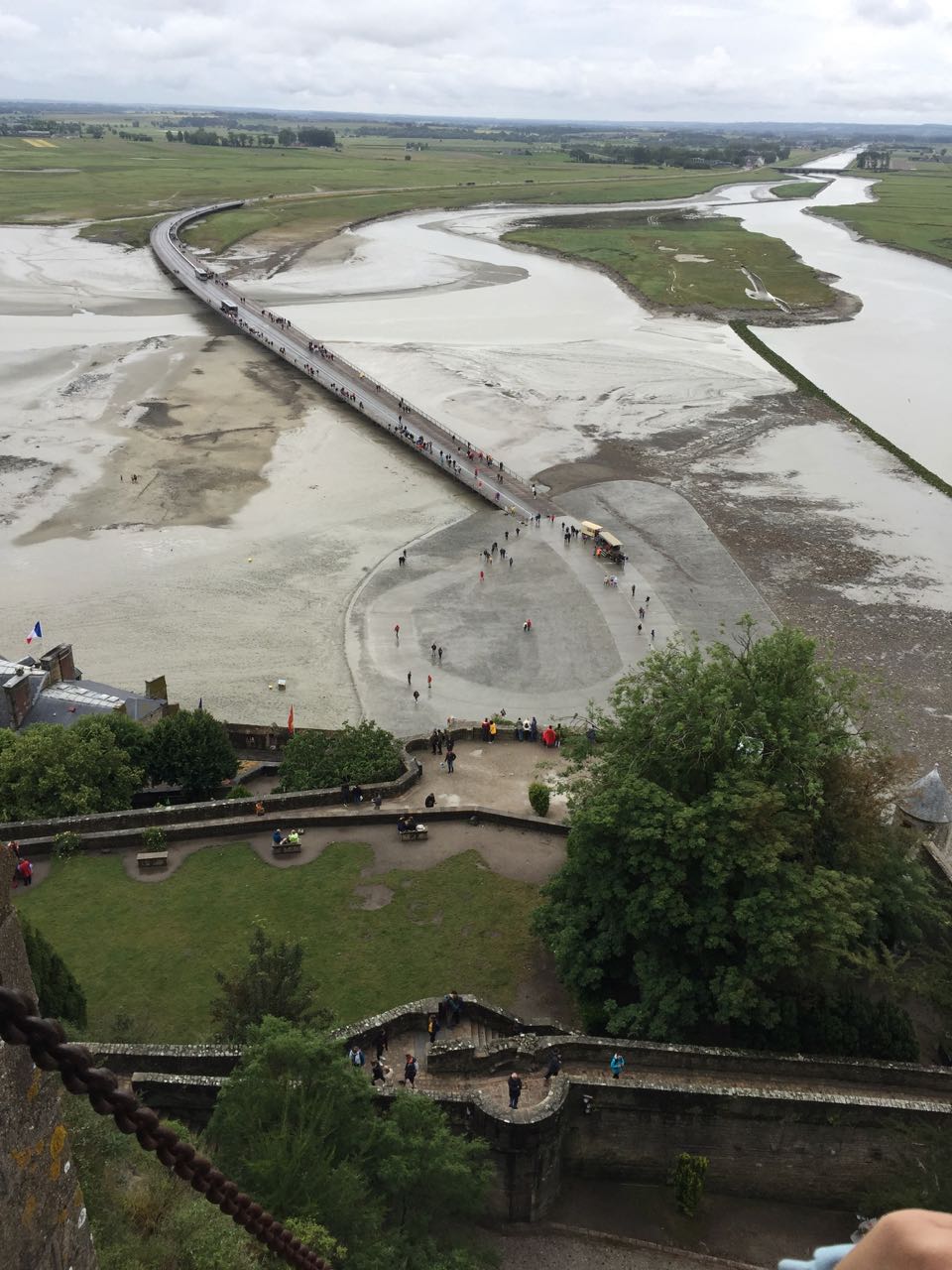 Which offers some spectacular views of any invading troops.

This seagull is inspecting their firing range, because of course they have to practice in order to hit their targets efficiently. 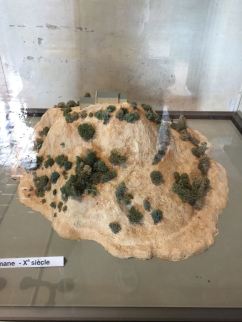 Here you can see what the island looked like during various stages of development. They kind of look like unbaked chocolate chip cookies on a baking sheet, eh? 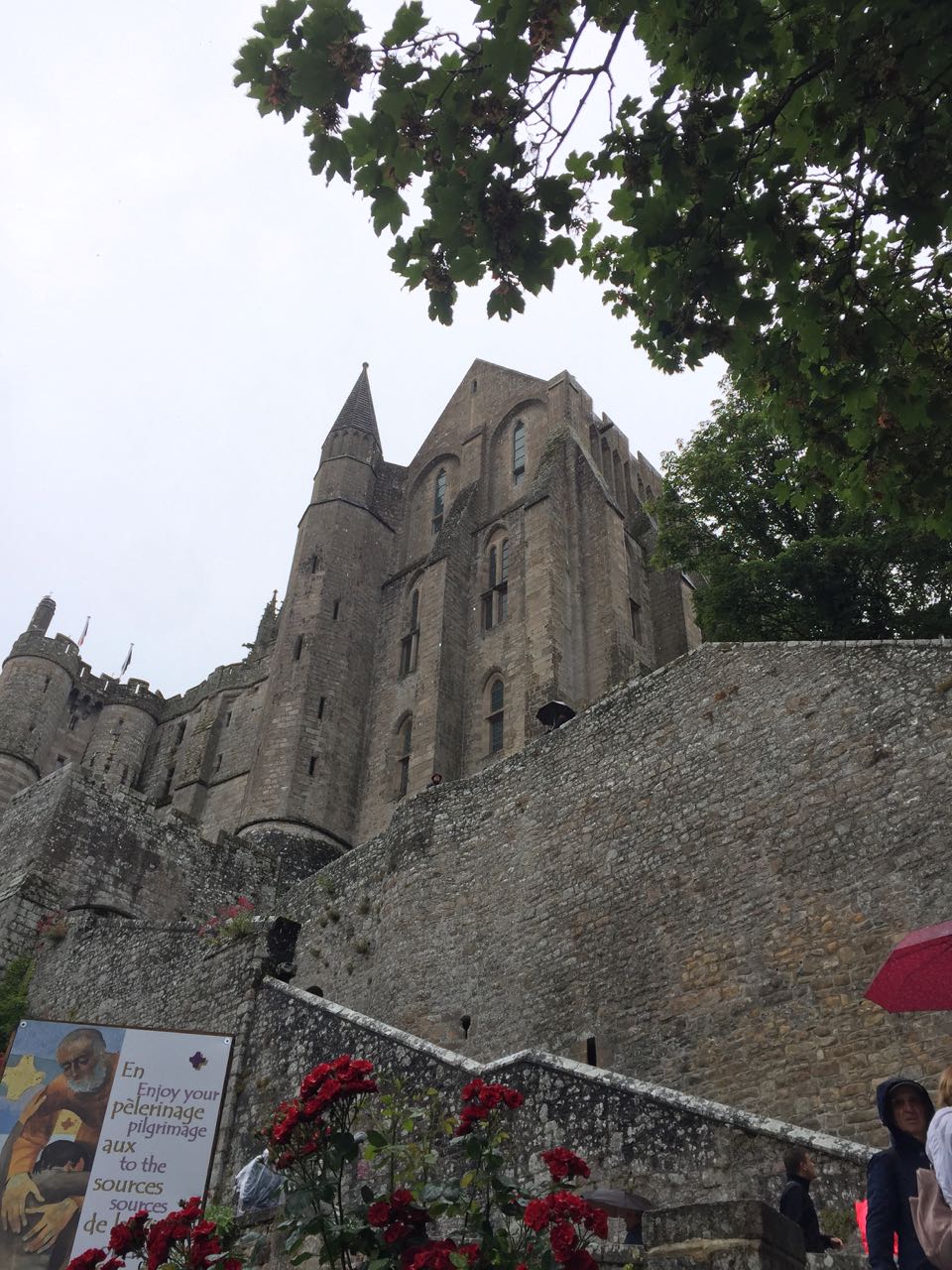 Many underground crypts and chapels had to be built to compensate for all the weight of that construction.

There’s a lot of uphill climbing to get to the top. Fortunately, this results in a lot of downhill climbing when you’re ready to leave. 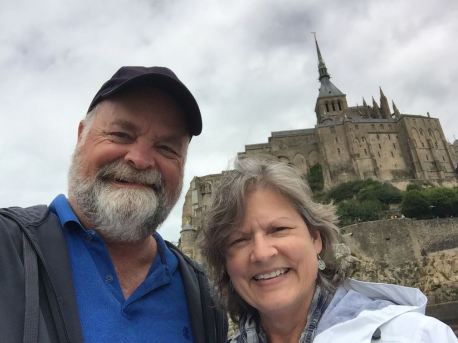 And so, we knocked another Unesco Heritage Site off our bucket list. There are 1,092 of those all together. We’ve seen a relative handful so far. I wonder how many years it would take to see them all? Too much for one lifetime I’m afraid, so we’ll have to make do with what we see while we’re traveling Europe!