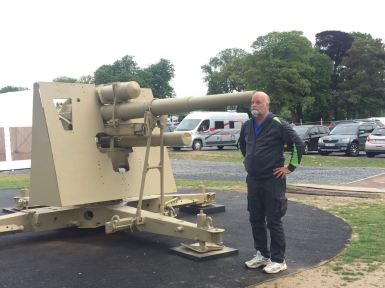 On June 6, 1944, the allies used the largest armada ever assembled to invade Nazi-occupied France.

75 years and three days later, Kevin & Carolyn ventured to the beaches of Normandy to see how well it was going.

As you can see below, apparently some of the troops didn’t get the memo that we won the war. They’re still out there bringing their vehicles to the fight.

One of these days they’ll pick up a newspaper and figure it out.

We ended up in Paris because of a delayed flight from Crete, as detailed in the previous entry. This was our second visit to the City of Light, so we decided to stay in the outskirts and rent a car. We looked over what we considered the “Tier Two” attractions in Paris, since we’d already been to the Louvre, the Eiffel Tower, and the Monument to Rude Parisians.

One of the places I’ve always wanted to see was the beaches of Normandy.

The beach views are so iconic that when I sent a picture of one to my son Josh, who is well-versed in World War II lore, asking if he could guess where we were, he got it on the first try. I was hoping he’d still think we were in Greece, but he’s too smart for that.

I gotta tell ya, the thing I didn’t expect was the emotional feeling of standing on the beach and looking over the water, picturing the mass of ships greeting the Germans who woke up that morning. You just can’t mentally picture that the same way on any other beach.

It was and still is the largest seaborne invasion humanity has ever known. 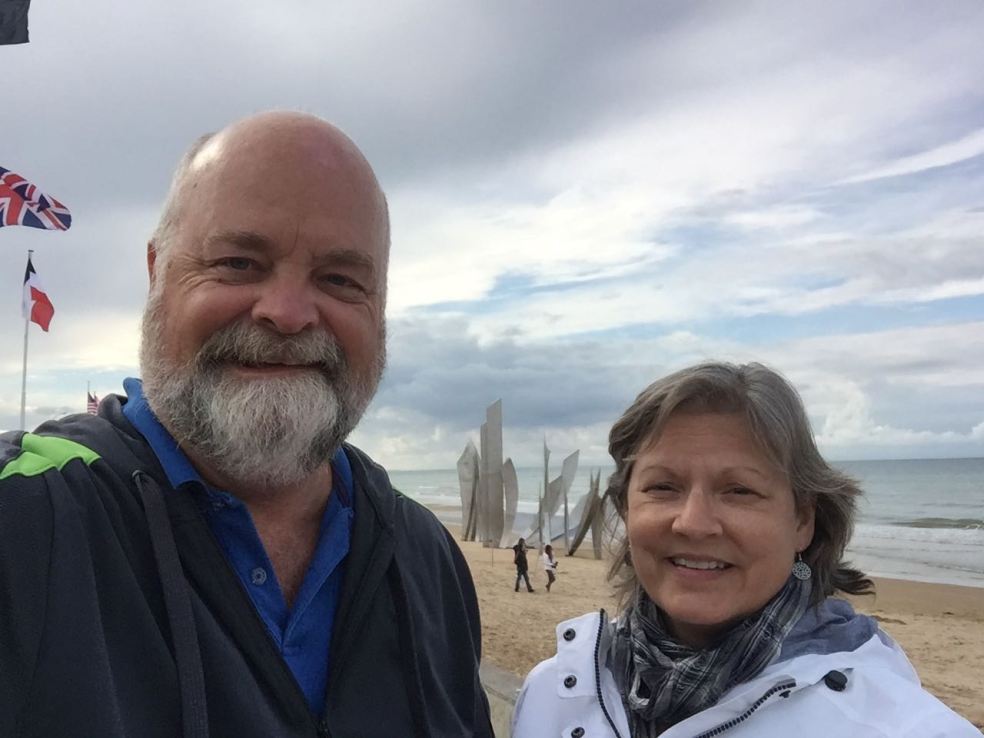 There’s an interesting monument on the beach: the Les Braves Omaha Beach Memorial.

It consists of three elements:
The wings of Hope
So that the spirit which carried these men on June 6th, 1944 continues to inspire us, reminding us that together it is always possible to changing the future.
Rise, Freedom!
So that the example of those who rose against barbarity, helps us remain standing strong against all forms of inhumanity.
The Wings of Fraternity
So that this surge of brotherhood always reminds us of our responsibility towards others as well as ourselves.
On June 6th, 1944 these man were more than soldiers, they were our brothers.

The sculptor said:
“I created this sculpture to honour the courage of these men.
Sons, husbands and fathers, who endangered and often sacrificed their lives in the hope of freeing the French people.”

This is the 1st Infantry Division monument. It stands in the middle of the area of Wiederstandsnest (WN62), which was one of the strongest defended positions in that area. It says, “In honor of the valiant Americans of the 5th Engineer Special Brigade who gave their lives in the assault on this beach on 6 June 1944.” 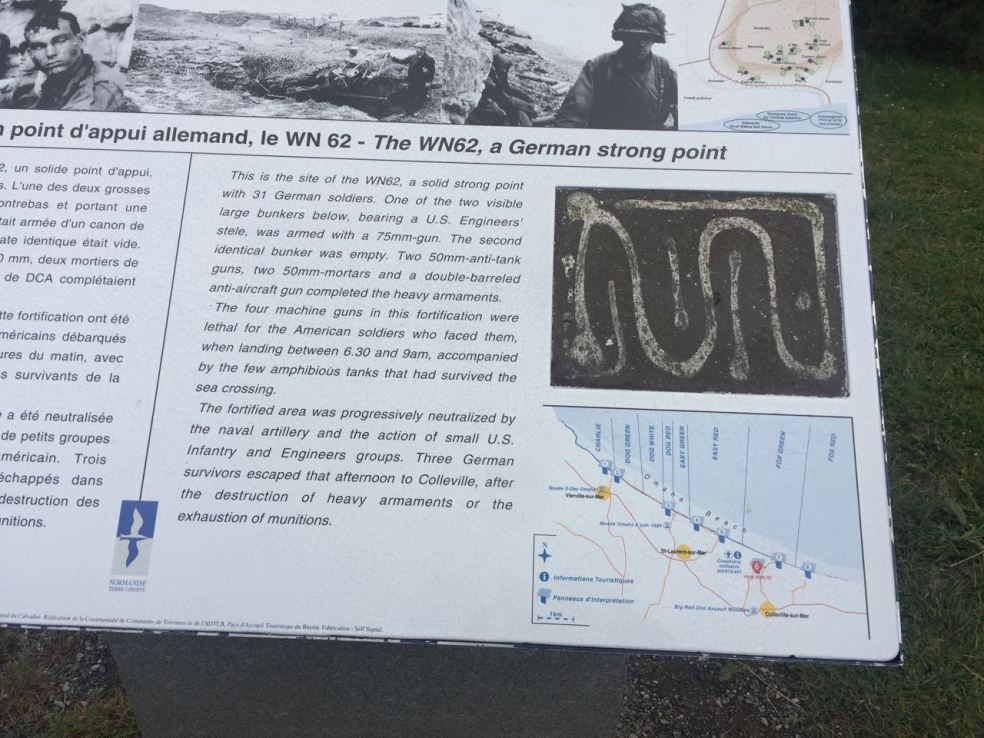 Flags of the allies stand guard over the Les Braves Omaha Beach Memorial. 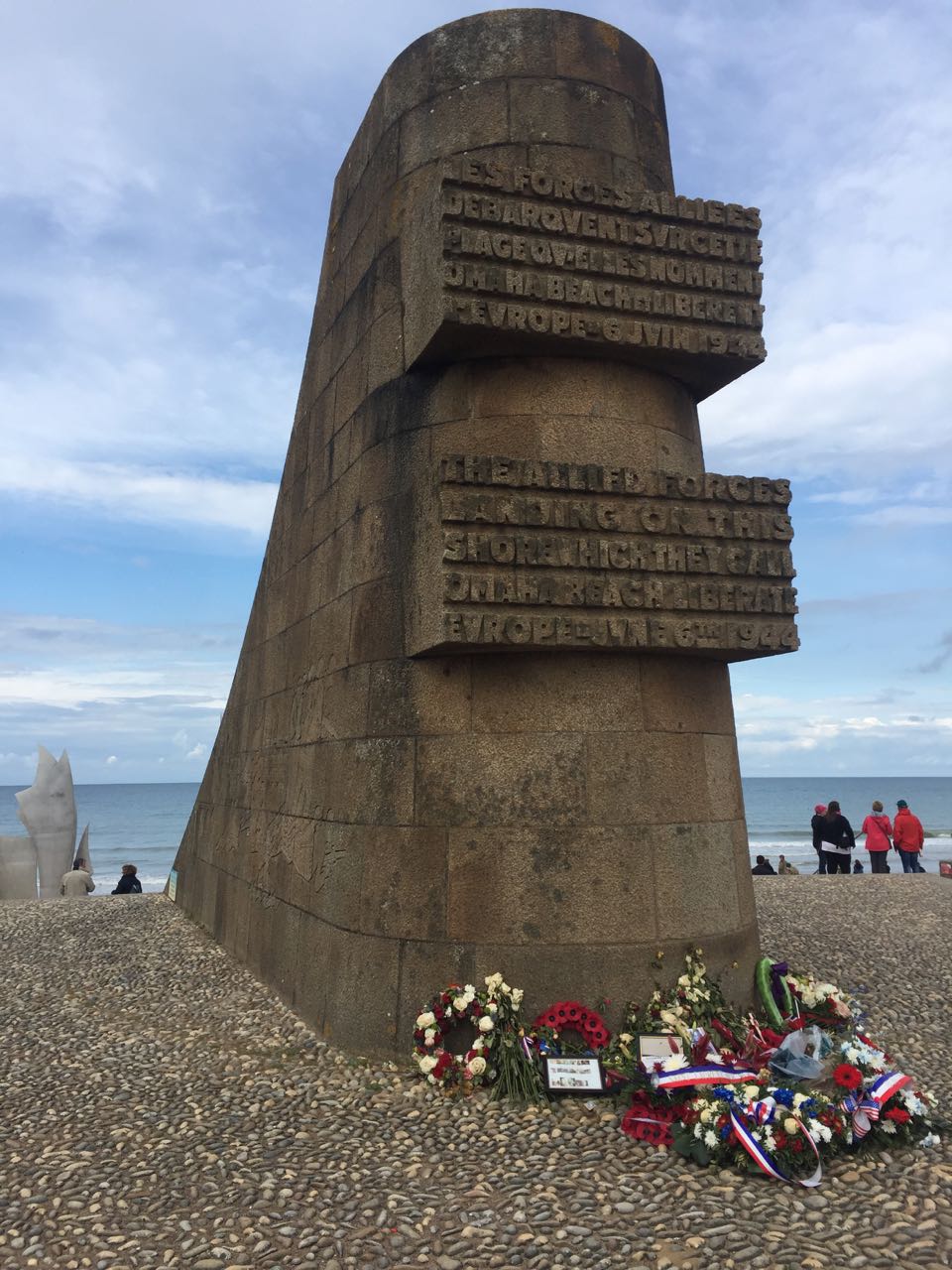 And yet another memorial, this one is called the Omaha Monument to the Allies. It says:

THE ALLIED FORCES LANDING ON THIS SHORE, WHICH THEY CALL
OMAHA BEACH, LIBERATE EUROPE – JUNE 6th 1944 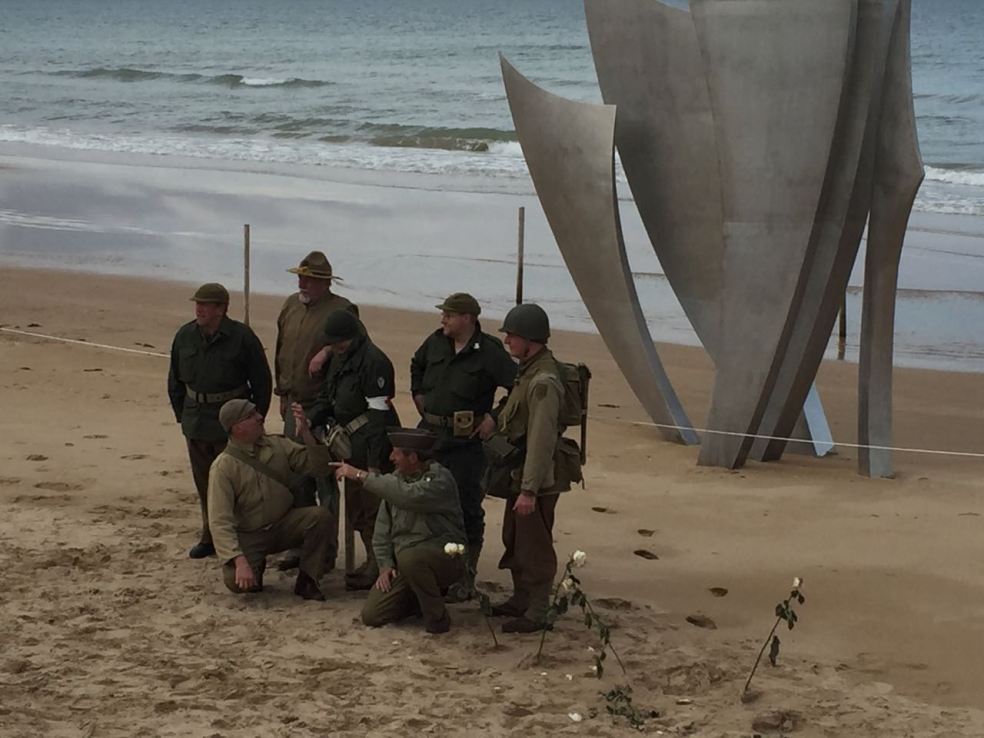 I presumed these soldiers weren’t a part of some sort of time-traveling expedition.

Having not been there before, I don’t know if they were there for the 75th anniversary or if it’s a usual touristy thing. 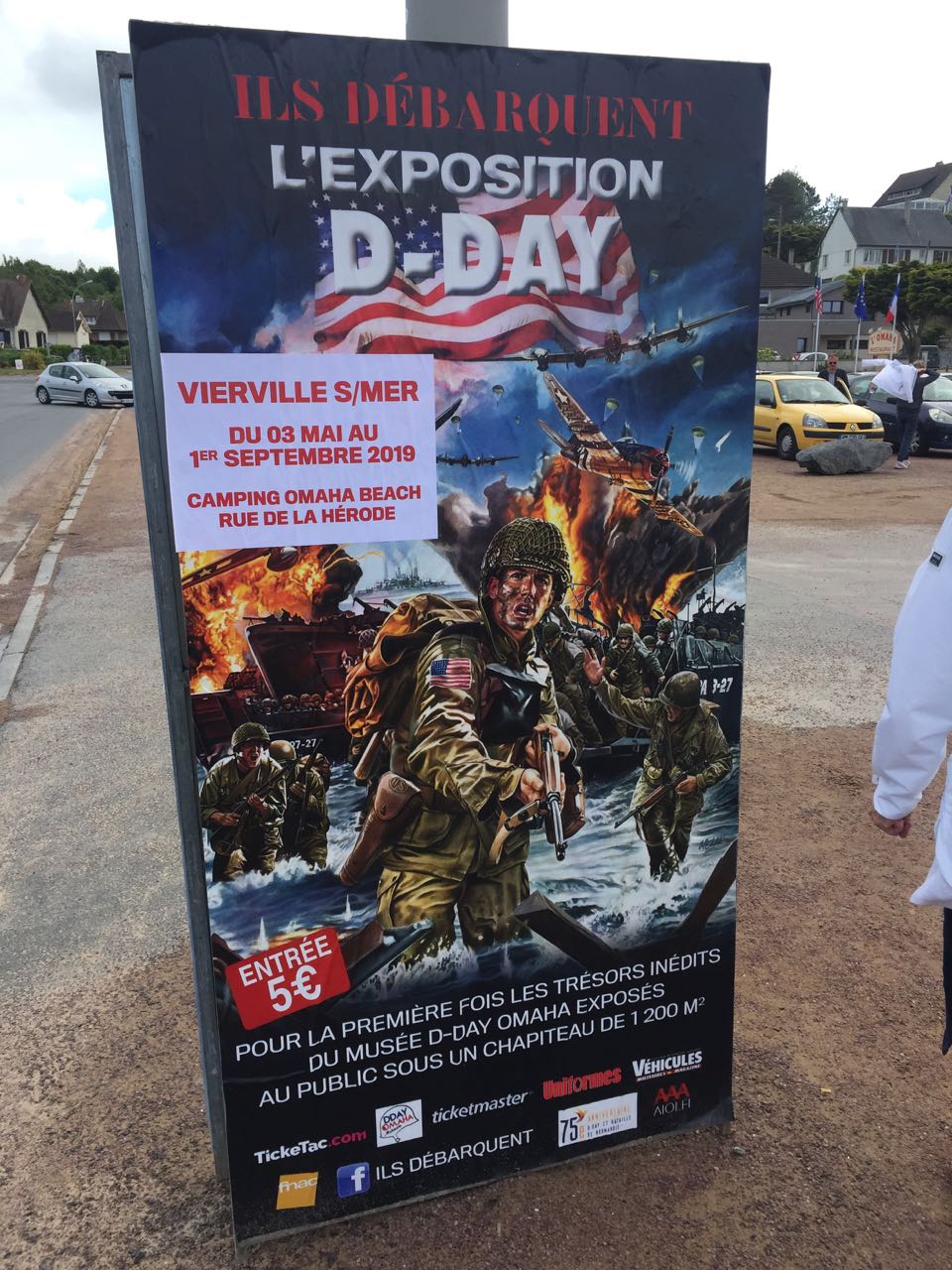 Other than this sign, and whatever leftovers we saw from the 75th anniversary celebration, it wasn’t particularly touristy otherwise. A few restaurants, but mostly the focus is on the monuments and the beach, which it should be. 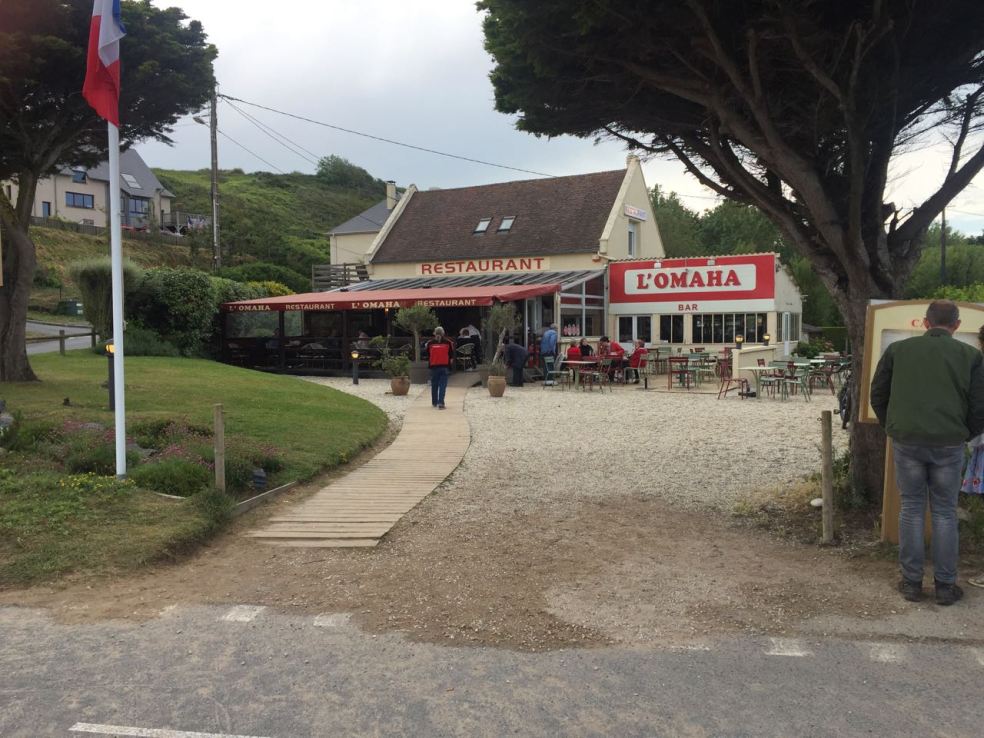 You can even eat at the L’Omaha. We checked the menu and it was overpriced, which was no surprise. What was surprising is that they didn’t offer Omaha Steaks.

Lots of signs around the area give you an idea as to what transpired.

Including detailed maps of the invasion force.

Or just a sign telling you you’ve found the right beach. 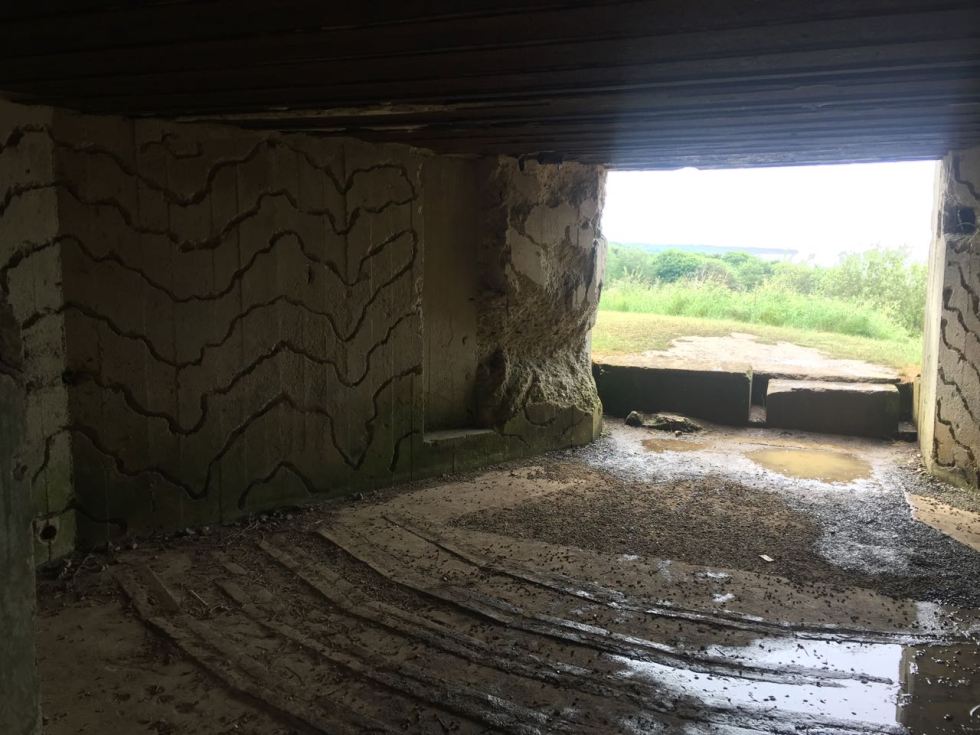 There’s a bunker/pillbox beneath yet another memorial. It was sobering to stand in a place where men died violent deaths.

Otherwise, we just spent a fair amount of time gazing over the water, being damned glad we were born after the disaster that was World War II. And all it took was one knuckle-headed demagogue and about 40% of a country that thought he was great… until they finally realized he wasn’t. 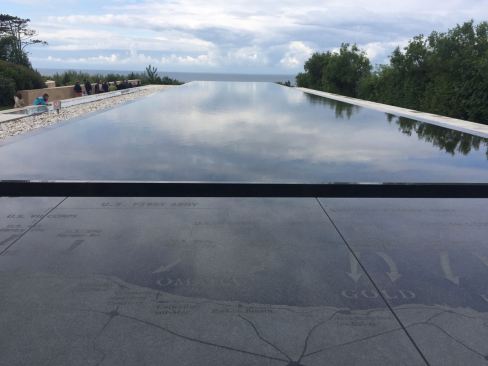 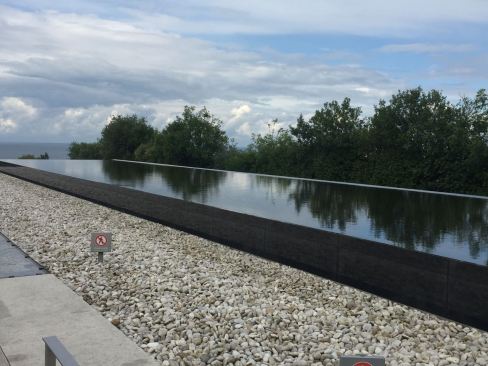 There’s a Normandy American Cemetery Visitor Center nearby with a water feature commemorating the beach.

There’s also an Overlord Museum. I assumed it was put there to commemorate me.

We didn’t go inside because we got there a little late in the day, but they have lots of vehicles outside you can take a gander at.

Which means I had to get tanked too.

I’m pretty sure our car couldn’t roll over these.

Putting the “art” in “artillery.” 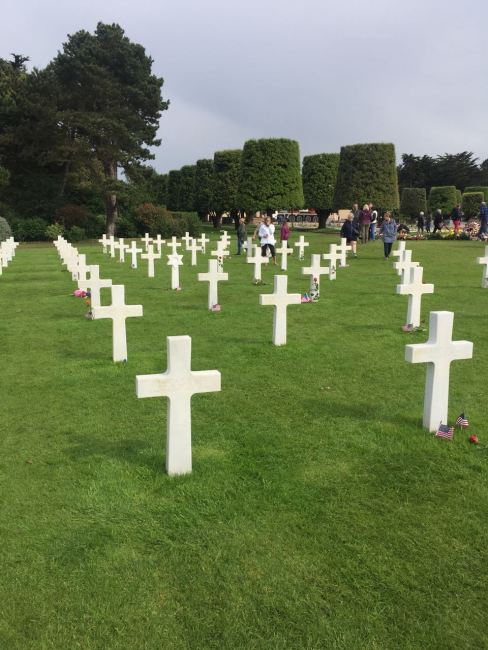 Pictures don’t do it justice especially in terms of how the monuments cover the ground almost as far as the eye can see. It’s a somber place. 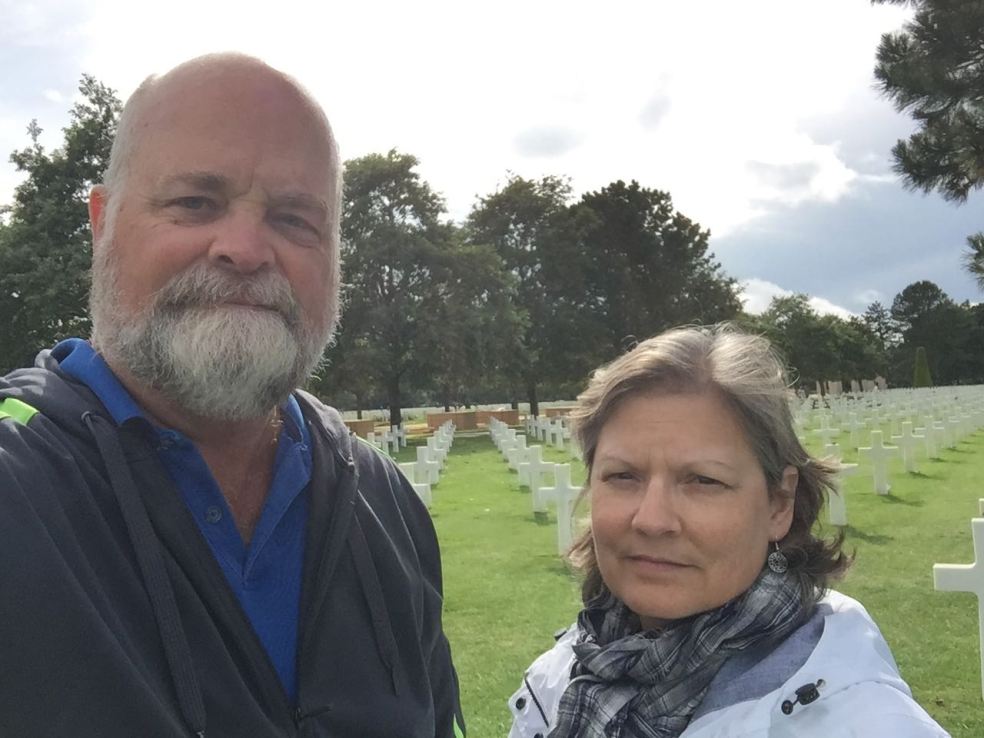 And not one where we felt it very appropriate to take a big smiling selfie.

Once we left there we stopped at a -–gasp– McDonalds, just because we were in a slight rush and besides, we wanted to commemorate what the victory eventually brought the Europeans: McDonalds! Burger King! Disneyland! Heart attacks! The reason I took this picture is because the place was so busy, they were stacking food on the countertops. But it wasn’t just busy, it was haphazard. Probably these least organized McDonalds I’ve ever been to.