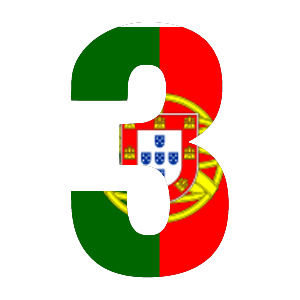 Lisbon’s climate is defined as Subtropical-Mediterranean, and features short and very mild winters and then warm summers. They had me at Subtropical.

Its climate seems very similar to San Diego’s, often considered the city with mainland America’s best weather. The average annual temperature is about 70 degrees during the day, and 56 at night. It doesn’t get much below 50 degrees during the day even in January, and is classified as having Europe’s warmest winters. In those winters, Lisbon has about three times more sun duration than in the northern half of Europe. In August, the warmest month, it gets up to about 90, although it can certainly top 100.

While you could make a case for Hawaii’s climate being true paradise, there’s something to be said for some variation and seasonality. Instead of 80 degrees year-round, we get a reprieve during the winter, and without having to deal with snow. The reprieve also provides a built-in reminder as to why you enjoy eight months of warmth and sunshine so much.

We’ve been able to go to the beach since April. We still have had bouts of rain, but as Oregonians, we actually think that’s pretty cool too. It just never seems to last more than three to four days, as opposed to the October-through-June drizzle of Oregon.

We’re especially fortunate to be living just outside of Sesimbra. So far we’ve seen some hot spells where Lisbon is about 4-5 degrees warmer. Plus we have a steady breeze due to both our proximity to the ocean as well as our being on a peninsula, where we’re virtually surrounded on three sides by ocean. 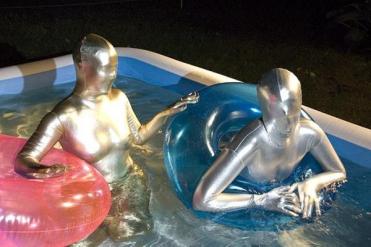 Whenever there’s a hot spell, we spend a lot of time in our pool. As we do so, we constantly marvel at how fortunate we are to be living in what can only be described as a permanent vacation. Sure, since we elect not to wear full-body sunscreen armor like the folks to the right, so our skin will probably age and get crinkled faster than if we were in rainy Oregon, and what little hair I have may get sun-bleached blonde… okay, maybe just from grey to white. But our goal isn’t to create nice-looking corpses. We’re having a great time, and the climate plays a big part in that.

As you can tell, we adore the climate, and that alone would keep us here. As it happens, there are two more things that we love even more about Portugal!