This week was mostly spent looking at a variety of homes. After looking at a lot of apartment-type places, we’ve pretty much decided to invoke our American nuclear option and hunt harder for actual houses (or perhaps townhouses) instead. I guess I’m not ready to live in a place where one wrong leap means instant death.

We have already seen some we could definitely live in, but there are always more to see. What’s also true is that a lot of them are sold before we even get a chance to see them; the market is pretty robust over here. Anyway, house hunting marches on at least through next week. We’re hoping it won’t be much longer than that. We’re not tired of the hunting yet, but obviously we’d love to find our dream love nest and keep moving forward with all this.

We also had to meet with our attorney and apply for our NIF (pronounced “neef”), which is the tax ID we need to do just about anything non-touristy in Portugal. We should have that in a few days.

Portuguese realtors don’t have some of the advantages of their US counterparts. They employ no lockboxes, have no single source (like the MLS) for all properties, they have no open houses, every visit needs to be scheduled with the appropriate realtor, and not much happens on weekends. Our poor realtor has to work a lot harder than they do in the US, at least when looking for houses to buy. She already has pages and pages of contacts and crossed out meetings filling her book just because of us. It’s not an easy job.

So, with the weekend upon us we thought we’d go visit the São Jorge Castle, which

is one of Lisbon’s top attractions. As we drove toward it, I looked at Carolyn and said, “Do we really want to go visit a castle that has a great view on such a cloudy day?” It’s been a little difficult to adjust to the fact that we’re sightseeing in a place where we’re going to live. Usually we’re all like, “Let’s go see this, and that, and hurry up! We might have to leave before we can see it!” But we’re retired and living here. We can slow the hell down!

And so we agreed that we could pick any one of the 300 days of the year the sun shines in Lisbon instead of this day’s cloudy offering to see the castle. We decided to just keep driving and head down once again to Sesimbra, where we’re also going on Monday to look at a bunch of homes. We’re very attracted to the area, and so thought it worth some additional scouting about. 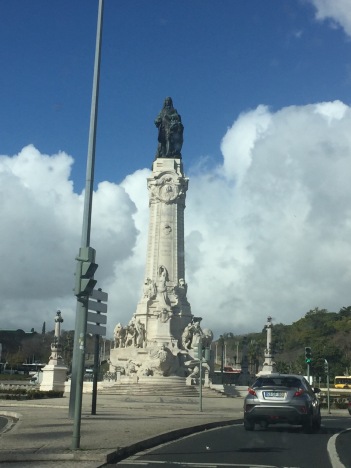 But first, here are two images taken within Lisbon. If I don’t throw those on here now, we’ll forget all about them and you’ll never see them again. And then you’ll be like all mad and everything because there was one fewer bridge and statue picture than you felt you deserved for all the money you’ve paid to read this. So get off our back. 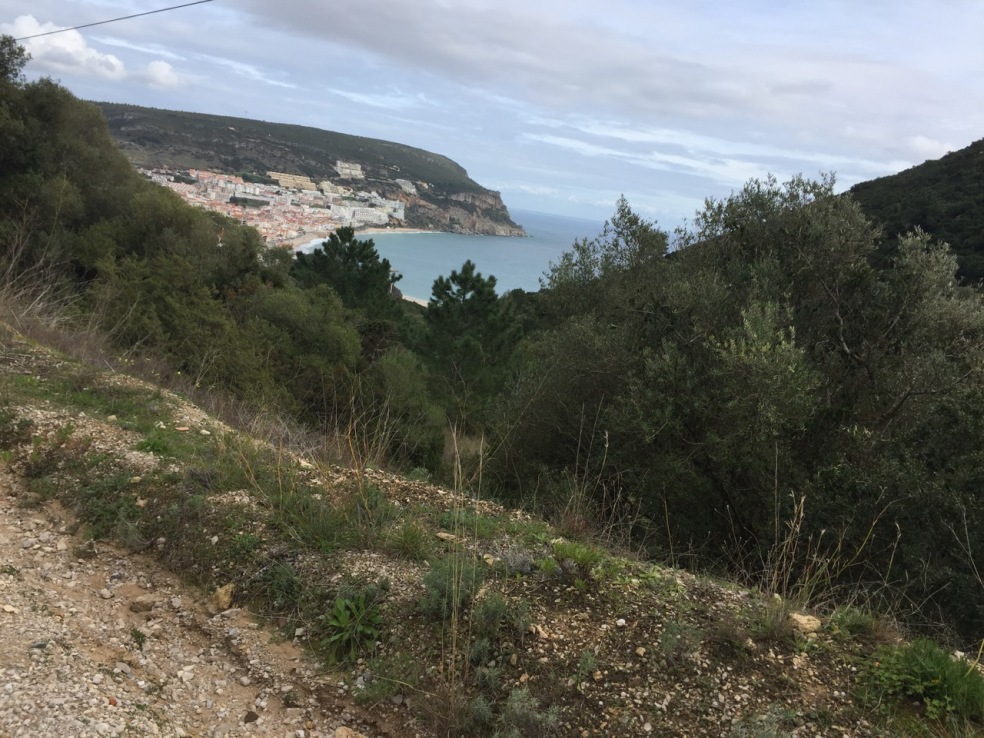 Since we already bored you with some Sisembra pictures on a recent post below, we’ll only add one more that we took while four-wheeling it up into the mountains. Here, you get greenery, the beautiful buildings of Sesimbra, and the ocean, all in one shot. They truly have some breathtaking vistas almost everywhere you go.

Once we conquered that territory again, we decided to drive over to Setúbal, which is a city about 40 minutes to the east of Sesimbra. Setúbal used to be a big part of Portugal’s fishing industry, particularly with sardines. Unfortunately, they decided the things were too damn small to mess with, and besides, most people in the world finally figured out they just plain taste bad, so they closed all those factories. However, the port remains vibrant with import/export and other maritime activities.

It was a little more industrial than anything we’ve seen so far, but we took some pictures because, in the end, everything in another country is a little bit interesting, isn’t it?

It was a good day of traveling and sightseeing and just getting to know the whole area better. Thank God for the iPhone, because it means we can just drive and get lost and use the GPS to find our way home whenever we want. However, Portuguese road signs and our ever-growing knowledge of the area allowed us to conduct the entire day’s trip without having to use the GPS at all!