While I have been to Vermont, I’ve never been to Montpelier, so for the time being I had to settle for the ancient Greek building that inspired the Vermont State House in Montpelier, Vermont: The Temple of Hephaestus.

The temple resides in an area called the Ancient Agora of Athens. The Agora’s original purpose was as a gathering place or for commercial endeavors, as well as of course housing a reasonably cool temple.

(This is the Vermont State House in Montpelier, Vermont, just in case you were wondering.)

The Agora (which is the Portuguese word for “now,” so we felt right at home) was just a block or two from our hotel. Actually, in Greek, the word “agora” means “gathering place” or “assembly.” So we gathered and assembled there just like two ancient Grecians. 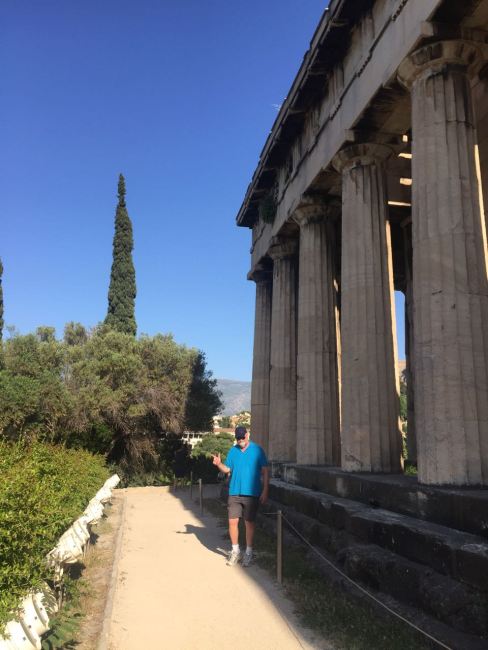 The Temple of Hephaestus has largely been preserved in its original state despite the fact that Hephaestus was the patron god of metal working, craftsmanship, and fire. Which means I would’ve thought he would have burnt the place to the ground after he was notified that he was about to lose his god status.

Fortunately, he disappeared without much of a whimper, as most gods do, leaving this impressive building in his ashes, –er wake.

As you can see, this is a container for offerings to the dead. As you can also see, the dead already scooped everything up. Greedy bastards, those dead people. 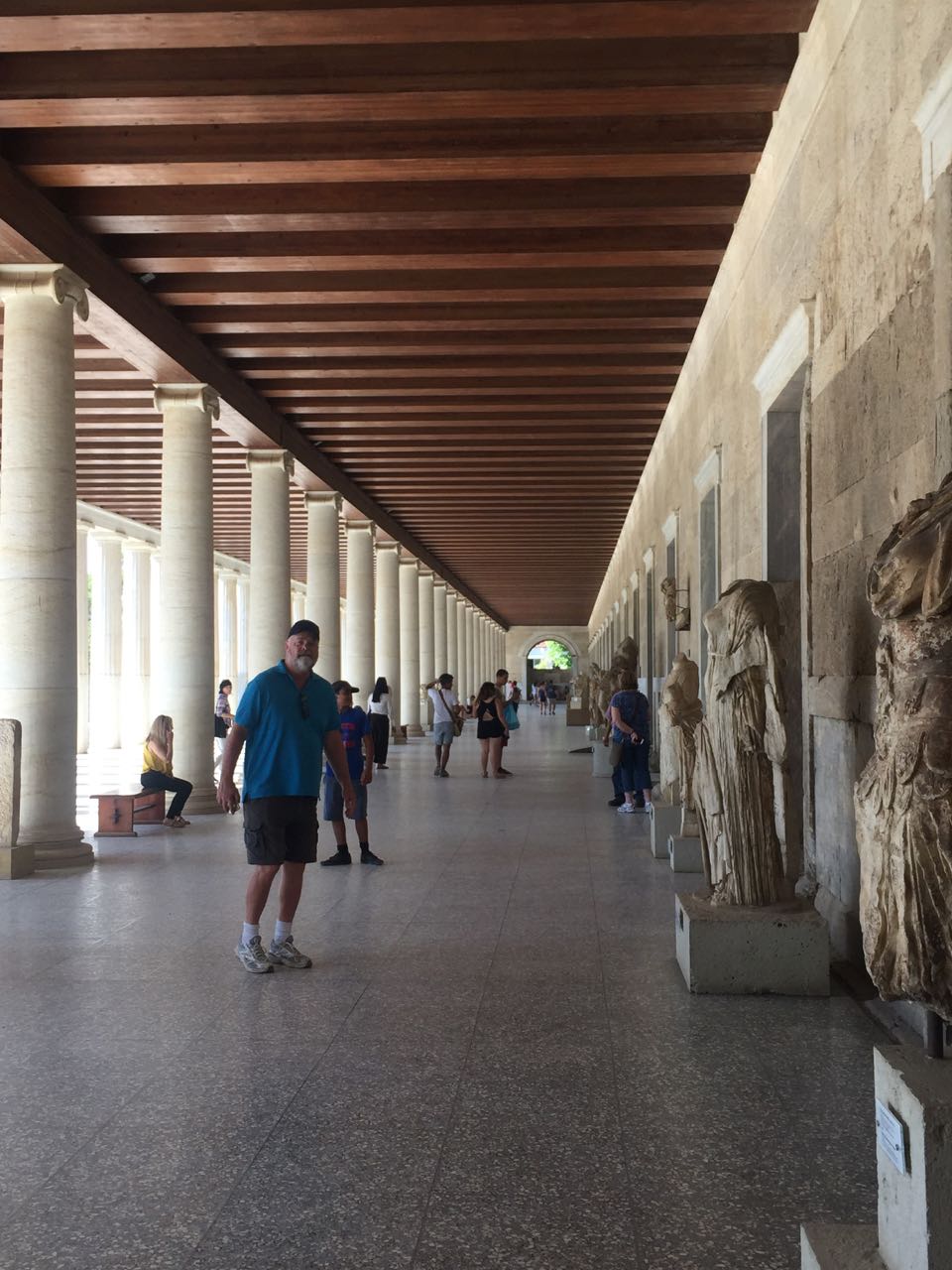 This building known as the Stoa of Attalos (we’re still in the Agora, or as I like to say, “O Aqui e Agora,” which means “The here and now” in Portuguese, which has absolutely nothing to do with anything except the word “agora” and my desire to show off my still-very-limited Portuguese skills). “Stoa” means portico or covered walkway. “Portico” is where you have to go after you’ve drunk too much port. “Walkway” is a word that turns into “runway” just by adding some planes. Accordingly, “Covered Runway” is just not a term you hear anymore, not after that one disaster anyway. 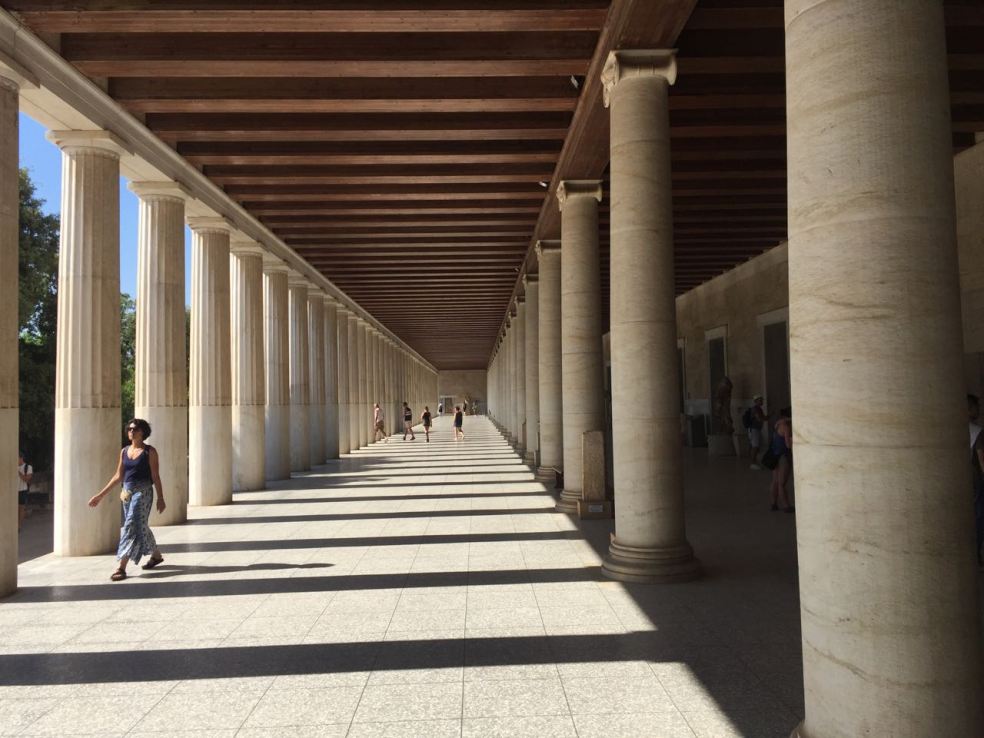 This photo provides some perspective. Ha! Anyway, it was built by King Attalos II of Pergamon, who ruled between 159 BC and 138 BC. The building as it stands today looks a helluva lot newer than that, mostly because it was reconstructed in the 1950’s by American and Greek architects.

The Stoa of Attalos has a museum inside it and a second floor (or first floor in European). This photo gives you an idea as to the sleek beauty of those gams– I mean columns. 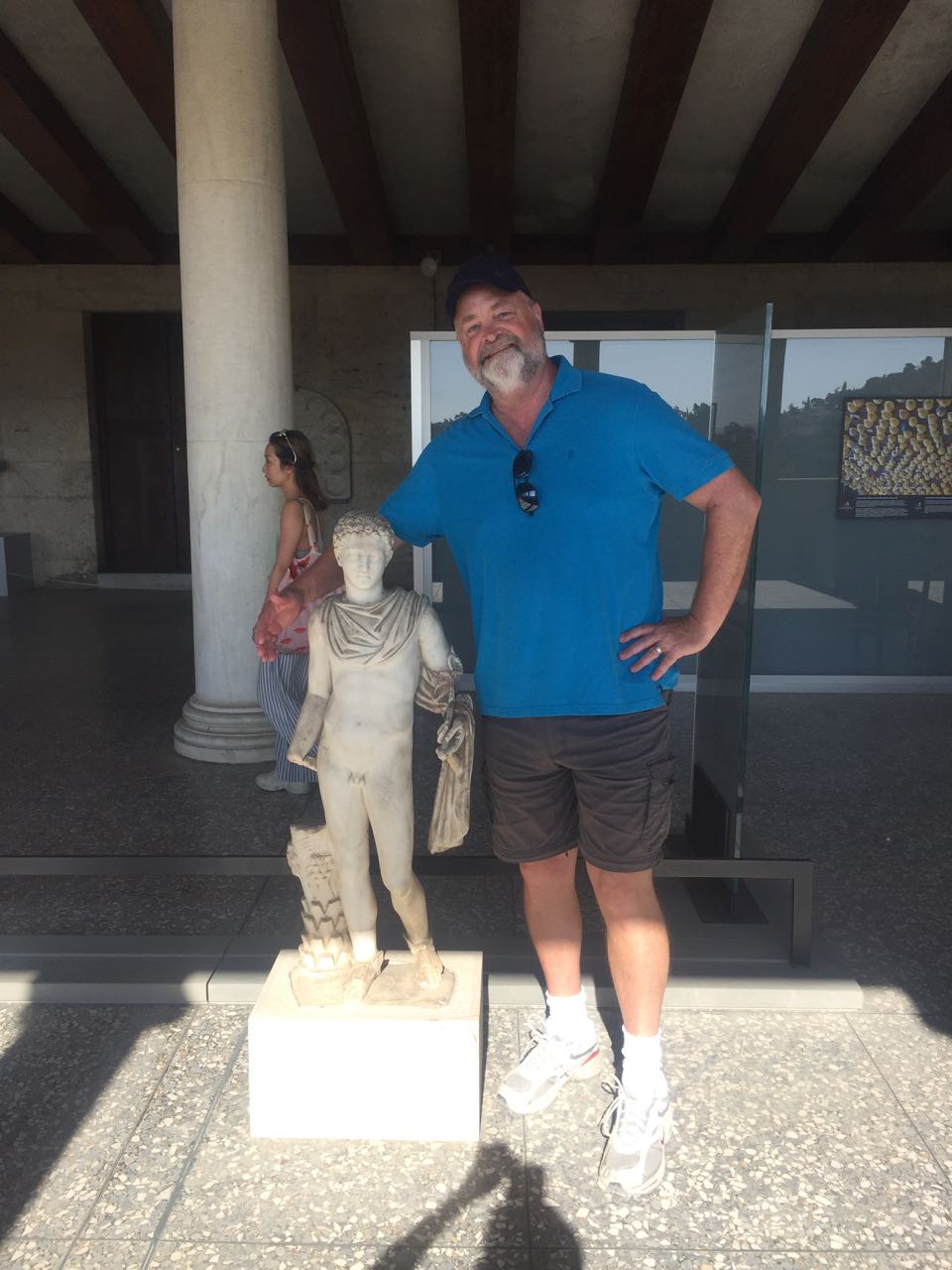 Everyone knows our species has gotten a little larger over the millennia, but few people know just how big a difference there is. And they say JRR Tolkien just made up the hobbits. This ancient life-sized sculpture begs to differ. This statue does explain a lot of the doors we’ve encountered.

Carolyn’s got this guy’s gnome-ber. 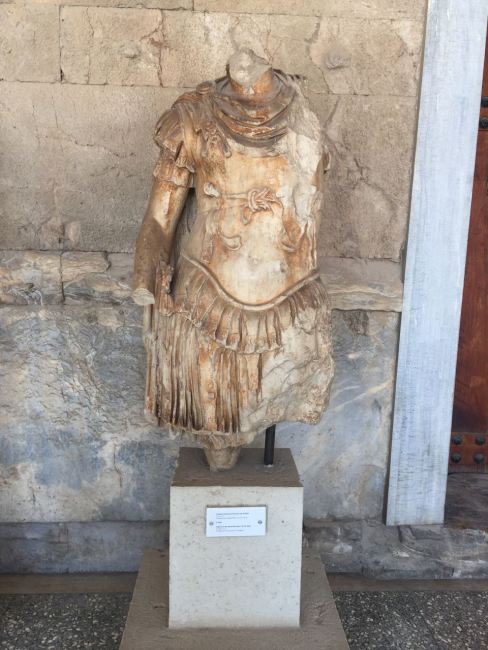 A lot of the statues on display lost their heads. We couldn’t make heads nor tails out of the reason. I guess they all simply had it up to here. It was neck and neck to pick the two most beautiful, but one was shoulders above the rest.

If I only had a brain…

We thought it appropriate to deface the photos out of respect for the defaced.

One example of the wares displayed in the museum. This vase demonstrates the mad jigsaw puzzle skills many archeologists find beneficial to their work. They have a hard time without the box top, however.

This is what the whole Agora area would’ve looked like back then. At least if you were either color blind or the whole thing froze over in a freak world-ending ice storm.

Moving on from the Agora, this is the neighboring Library of Hadrian, who was the Roman emperor from 117 to 138, and is now the patron saint of overdue book fines. His own fines were not forgiven by his successor Antoninus, so it’s now up to $82,423,122 with interest. I mean, there ain’t no Italian named Tony who’s gonna forget about yer debts, y’know?

All that made me ponder… do you realize there is a whole generation of people growing up who have no idea what an overdue book fine is? 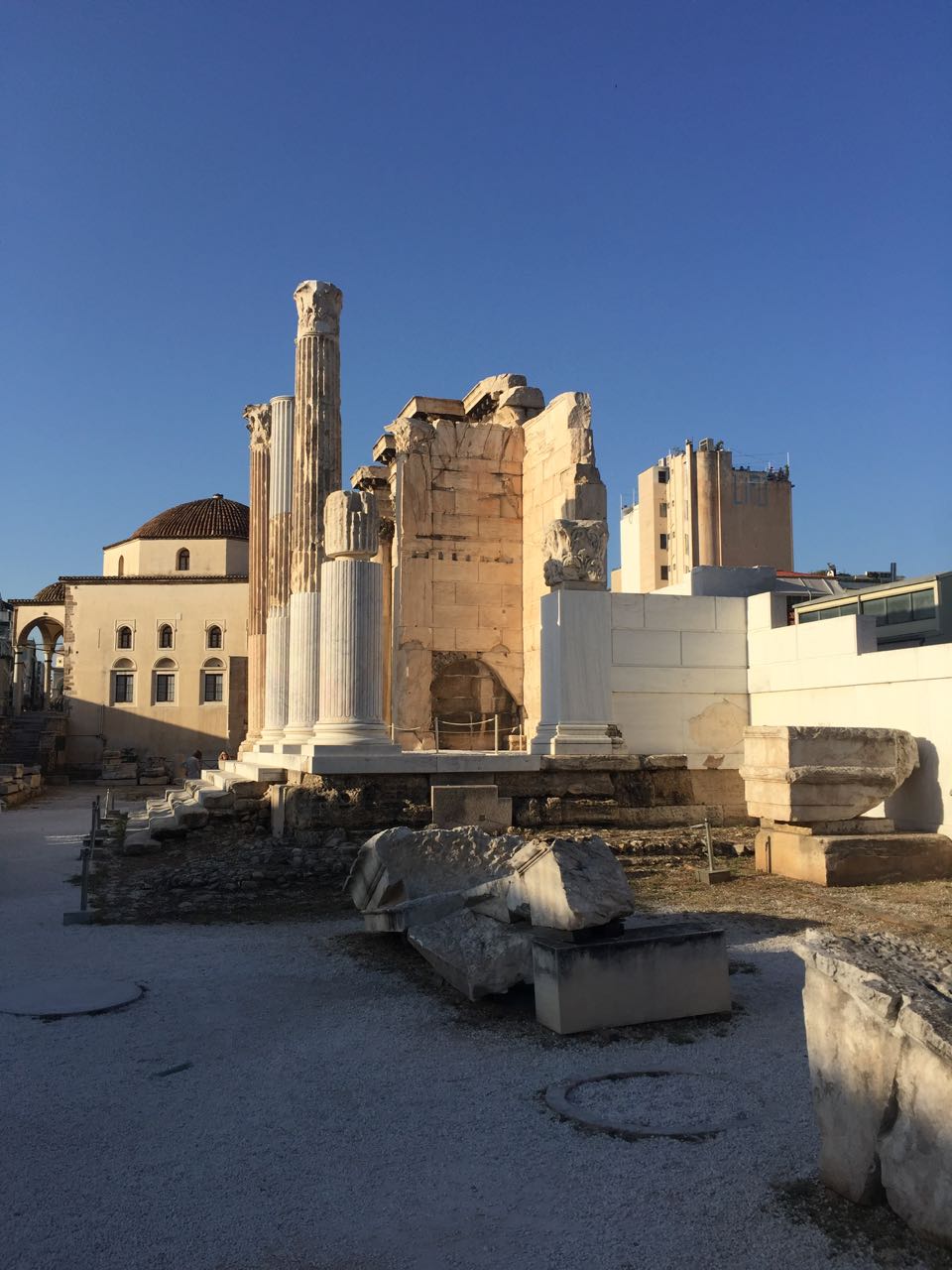 Hadrian is known for being both personally generous as well as extremely cruel. He must’ve been generous to the right historian’s forebears because he made it onto the “Top Five Good Emperors List” (if he wouldn’t have been so cruel, he might’ve made the “Top Five Very Good Emperors List”… but alas). He also traveled a great deal outside of Italy, unlike most of his predecessors. When he passed by, the people would shout, “Yo Hadrian!”

Another set of ruins in Athens is the Dipylon Ruins. So of course I had to act like a dip. Actually, the entire area is known as Kerameikos, or Ceramicus in the Latinized version. 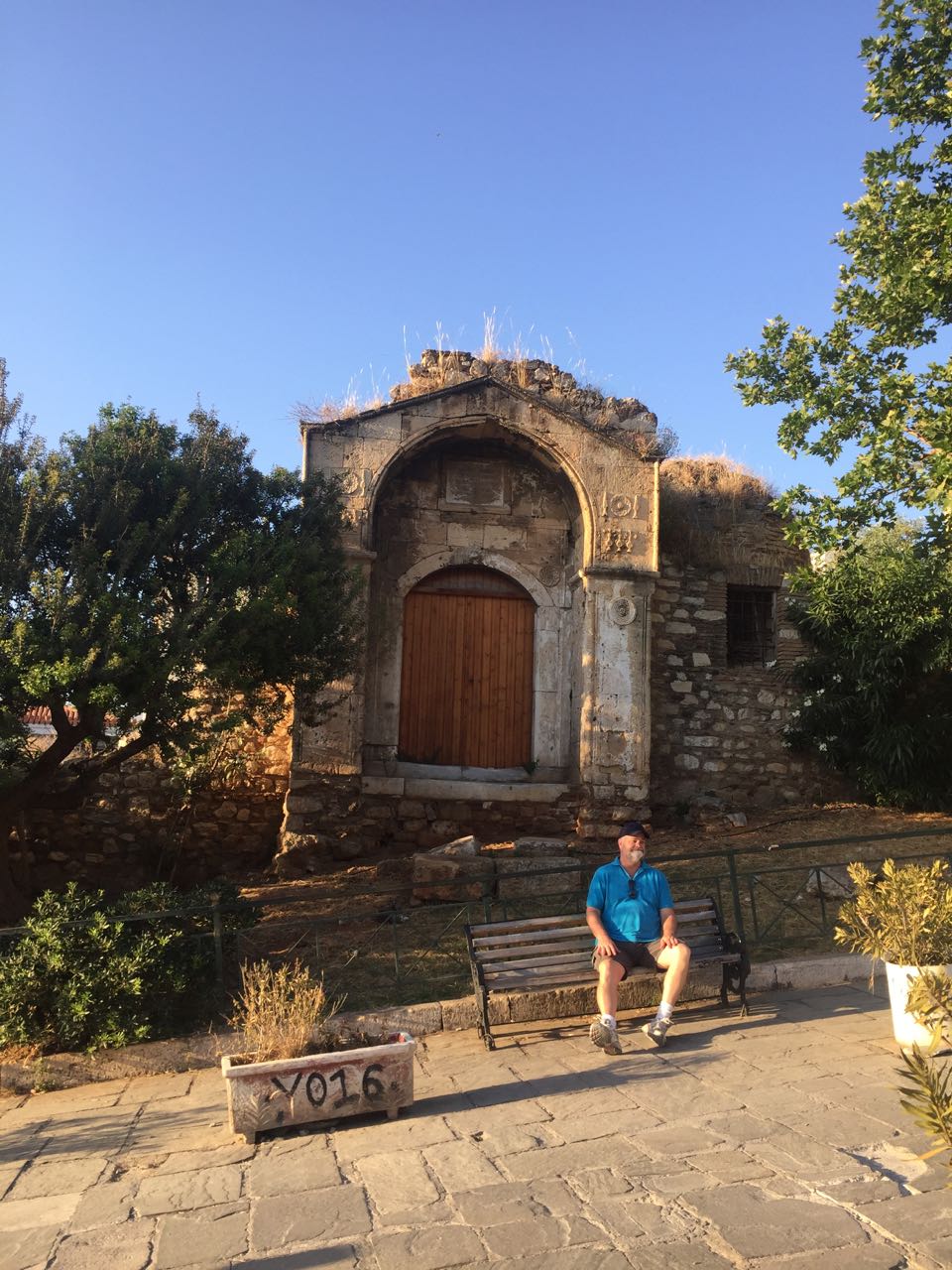 It’s a large area that resides both within and outside the ancient city walls. Since it was the potter’s part of the city, Ceramicus is what led to the world “ceramic.” True story.

I look kind of potted here myself.

I always look closely at walls in ruins, being continually amazed at the preciseness of their construction and alignment and the fact that they’re still that way even after thousands of years. 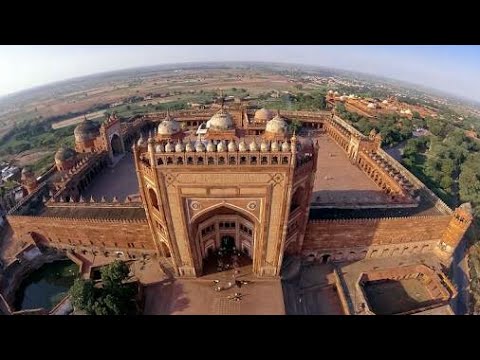 Since then, that honor has been taken over by the Buland Darwaza in India. We’ve never been to India.Yet.

Ceramicus was also the site of an important cemetery. There are still numerous funerary sculptures along the ancient road that led in and out of the city. They called it the “street of tombs,” reminding everyone that they, too, will one day be worm food. Today, America has replaced that with the “Street of Dreams,” reminding everyone that they, too, will never live in a house with eight big screen TVs, a five-car garage, and an underwater bar in the pool.

We simply stumbled across Ceramicus while taking a walk outside our hotel to places unknown. You never know what you’re going to find when you explore an ancient city!

Like almost every place in Athens, feral cats were plentiful. Some were even friendly. This one decided to share some of its fleas with Carolyn. 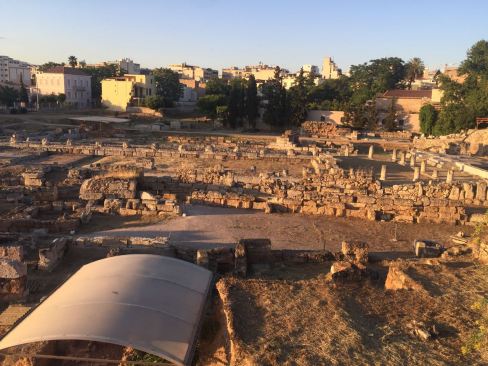 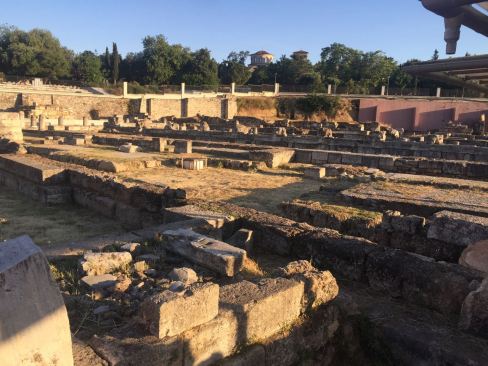 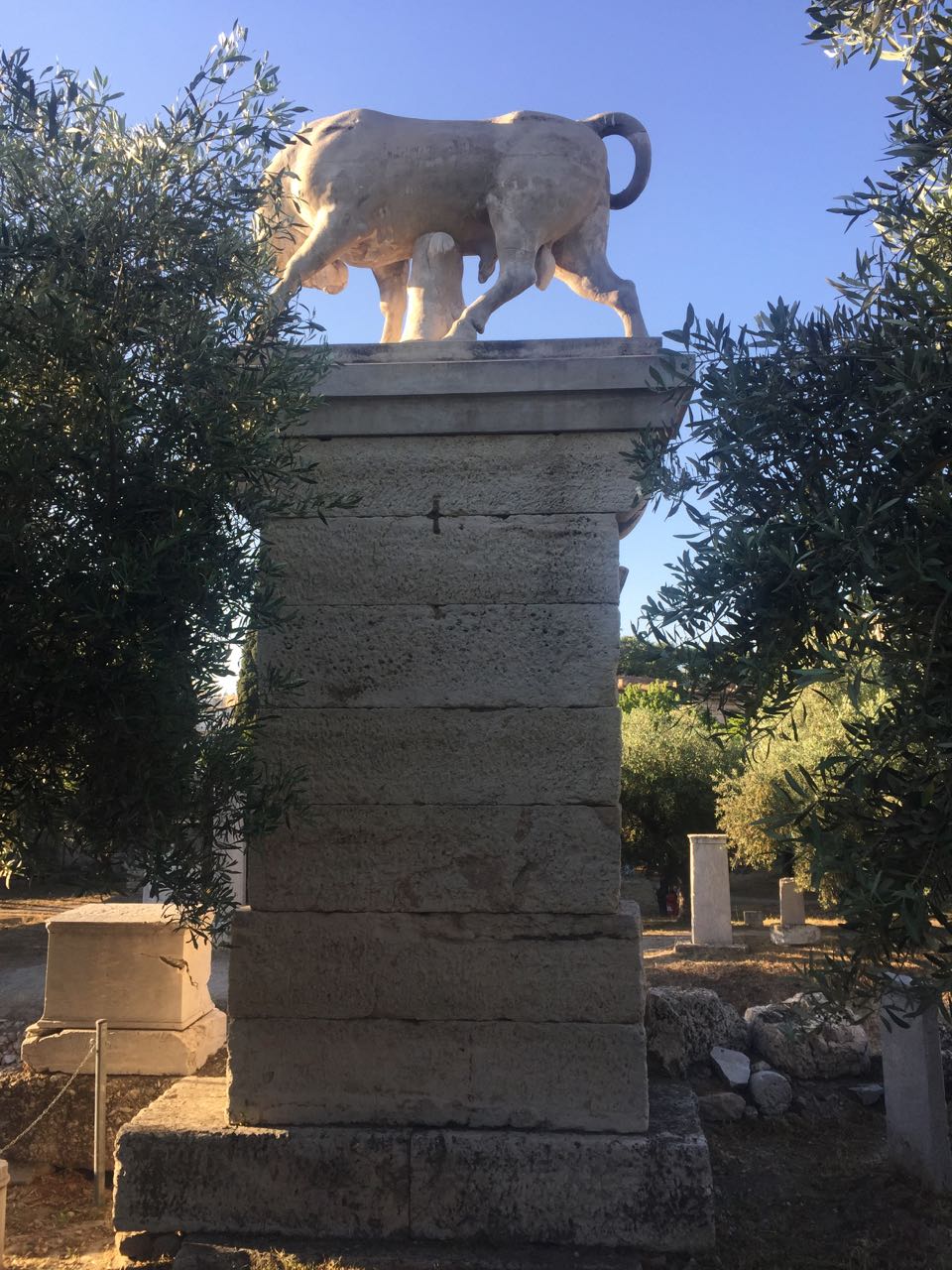 And that ain’t no bull.

Well, it is, actually, but that line sounded better that way.