Did you know that “mafra” means “worm” in Portuguese? No?

Well, you still don’t, because it doesn’t. Mafra is the name of a town in Portugal we visited recently.

For the heck of it I entered “worm” into Google Translate and it returned eleven possibilities. I’m not sure which one would be the most commonly used, especially since we haven’t found the occasion to use the word “worm” since we’ve been here (actually, we’re kinda grateful for that). I couldn’t even find the origin of the word (and they say the internet has everything!), but I do know that human beings walked around the area all the way back to at least 7,000 BC, making it one of the oldest known areas of human habitation in Europe, the oldest being Windsor Palace, I think.

So much for your Portuguese history and language lessons. Now it’s time for recess!

Traveling with our newfound American expat friends Sandy and Angella, we took a little trip up to Mafra, which is about a half hour drive from the center of Lisbon. The visit reminded us that while we’re constantly considering various places to visit around Europe, there is still plenty to see right here in Portugal. 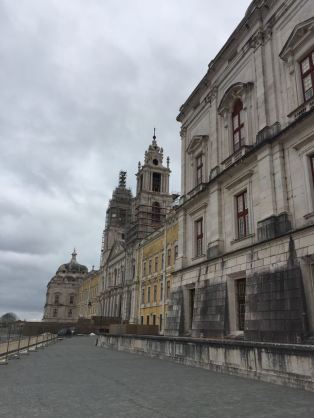 Mafra’s headliner is the cleverly named Palace of Mafra, construction of which began in 1717. It wasn’t fully completed until 1755, which was just in time to allow the Portuguese to watch the beginnings of the American revolution on TV.  It was used as a secondary residence for the royal family, which tells you something about the enormous resources they used to spend back then just to pamper royalty. The thing is huge. The whole complex covers over 400,000 square feet (for you Europeans: 37,790 m²) with about 1,200 rooms (1,200), more than 4,700 (4,700) doors and windows, and 156 (holy hell there are a lot of stairs in this house!) stairways.

But because 1,200 rooms may not provide enough excitement to entertain all visitors, they also throw in a cool feature to keep the place from going to the birds, by allowing you to get very close to some very cool birds.

Since it was Carolyn’s birthday, she got to have the solo pic with Fiona the owl, who kindly donned that particular coat of feathers in order to match Carolyn’s scarf. 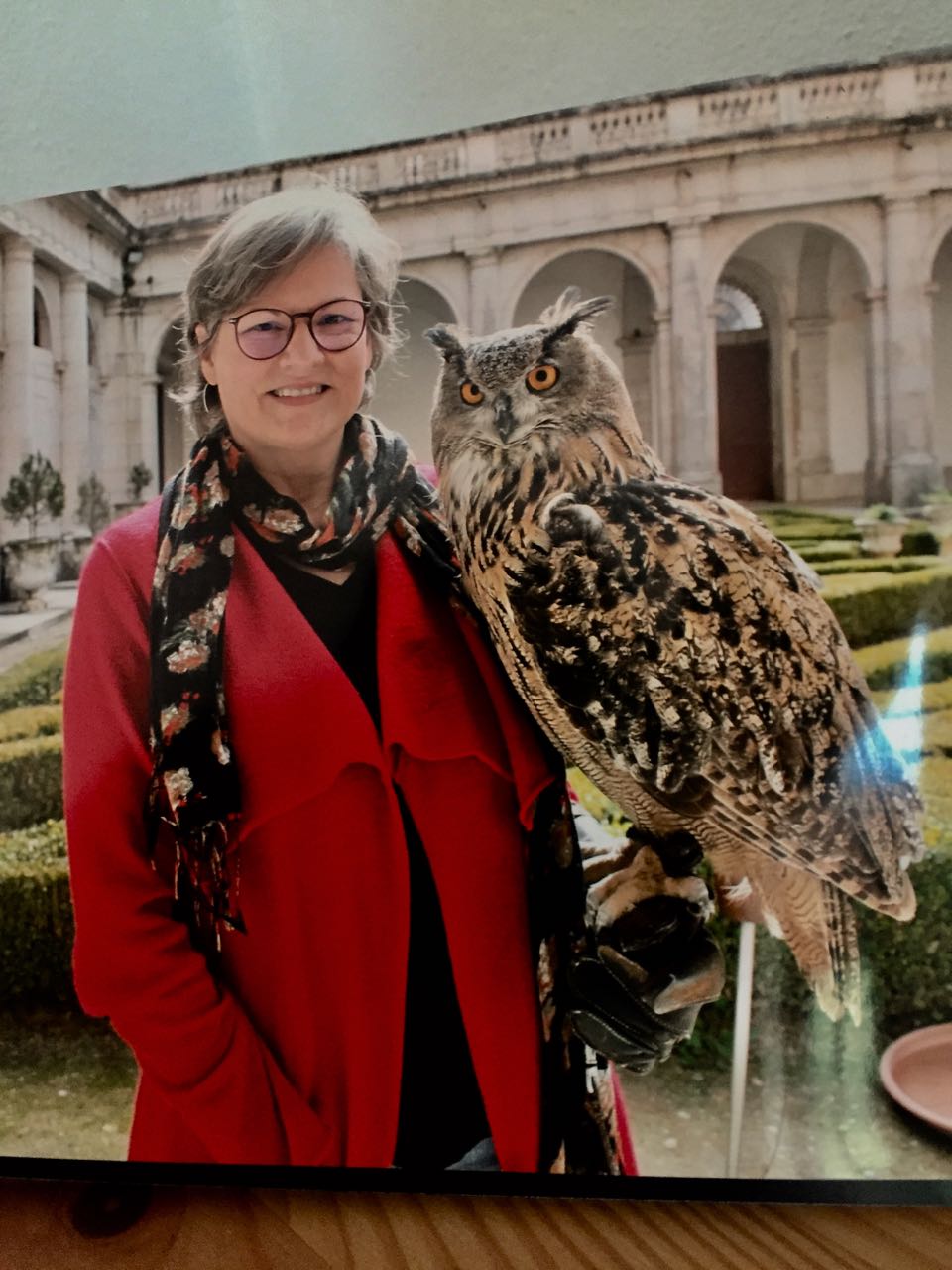 We paid eight euros for this picture, but we wouldn’t have gotten the other snapshots without the investment. She looks like a natural with a wild creature, doesn’t she? And I think Carolyn does too! Fiona is a European Eagle Owl, one of the largest breeds in the world. Carolyn is an American– wait, I better not make a joke here or I could get into trouble.

As soon as they let me in the picture Fiona turned her head in a fit of jealousy. In all seriousness, multiple breeds of birds, including owls, have exhibited homosexual behavior. We now know Fiona is one of them. There goes the neighborhood!

They had five separate birds on display, three of which were owls. This bird clearly isn’t an owl because its head is on straight. It’s a falcon. While it’s not a Peregrine falcon, a little piece of trivia about the Peregrines is that they have been recorded diving at speeds of 200 miles per hour (320 km/h), making them the fastest-moving creatures on Earth. So the next time some punk first grader tries to tell you cheetahs are the fastest animal, correct the little know-it-all brat and let him know that only refers to running speeds.

The handler goes in for a kiss. He’s been on the job since he replaced the previous handler, Carlos “No Lips” Johnson. 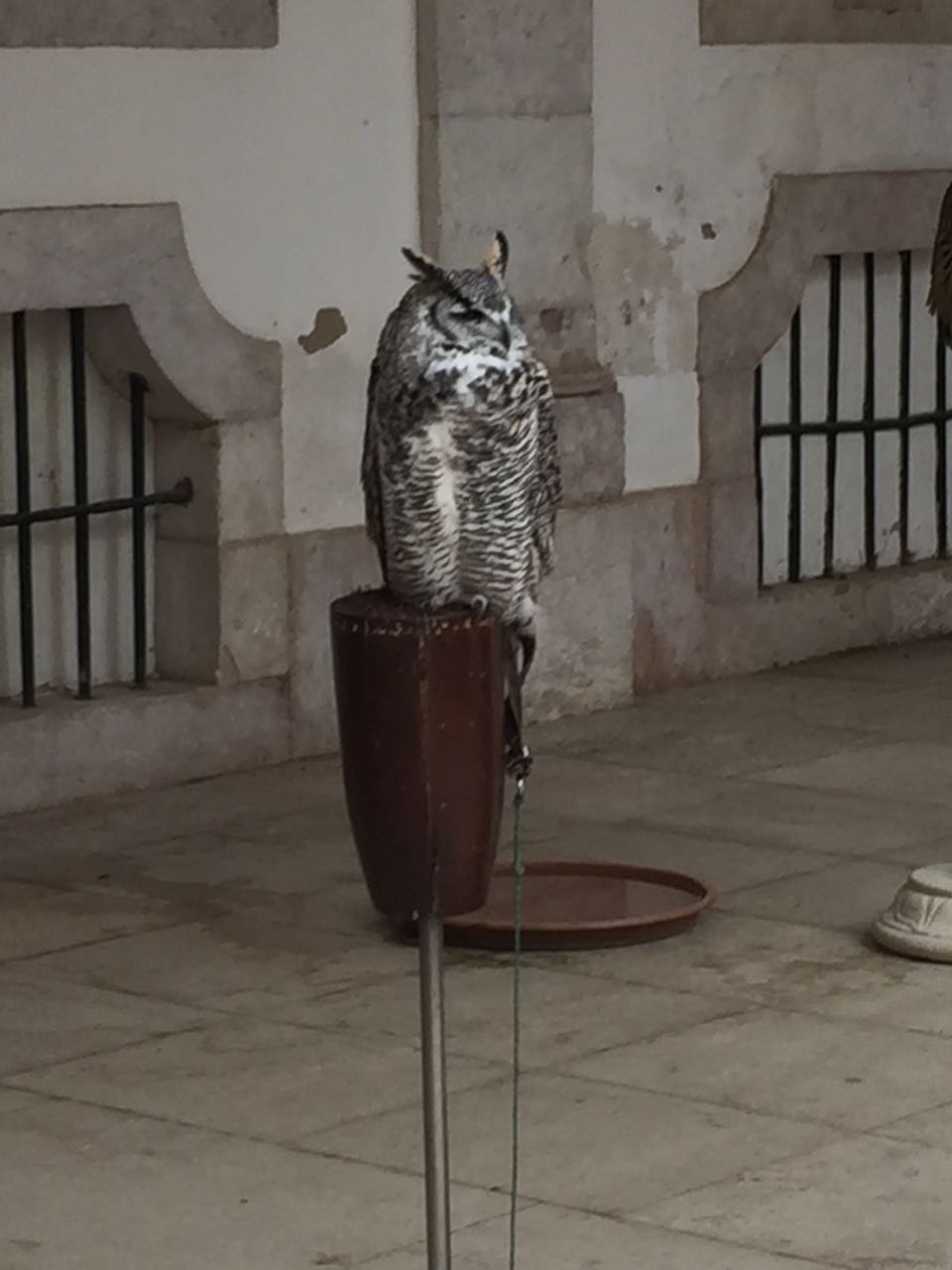 Owls are the third coolest birds ever invented, just after the hummingbird and the one that’s always being flipped but is otherwise invisible. This is a Pretty Good Horned Owl. In the wild they’re called Great Horned Owls.

Carolyn carefully holds her owl while the handler keeps it from eating off her nose by slipping a fiver under his feathers.

Here he provides instructions on how to abort the mission if the owl begins chewing on her face. But I don’t think Mr. Owl would do that to someone who looks as smart as him! 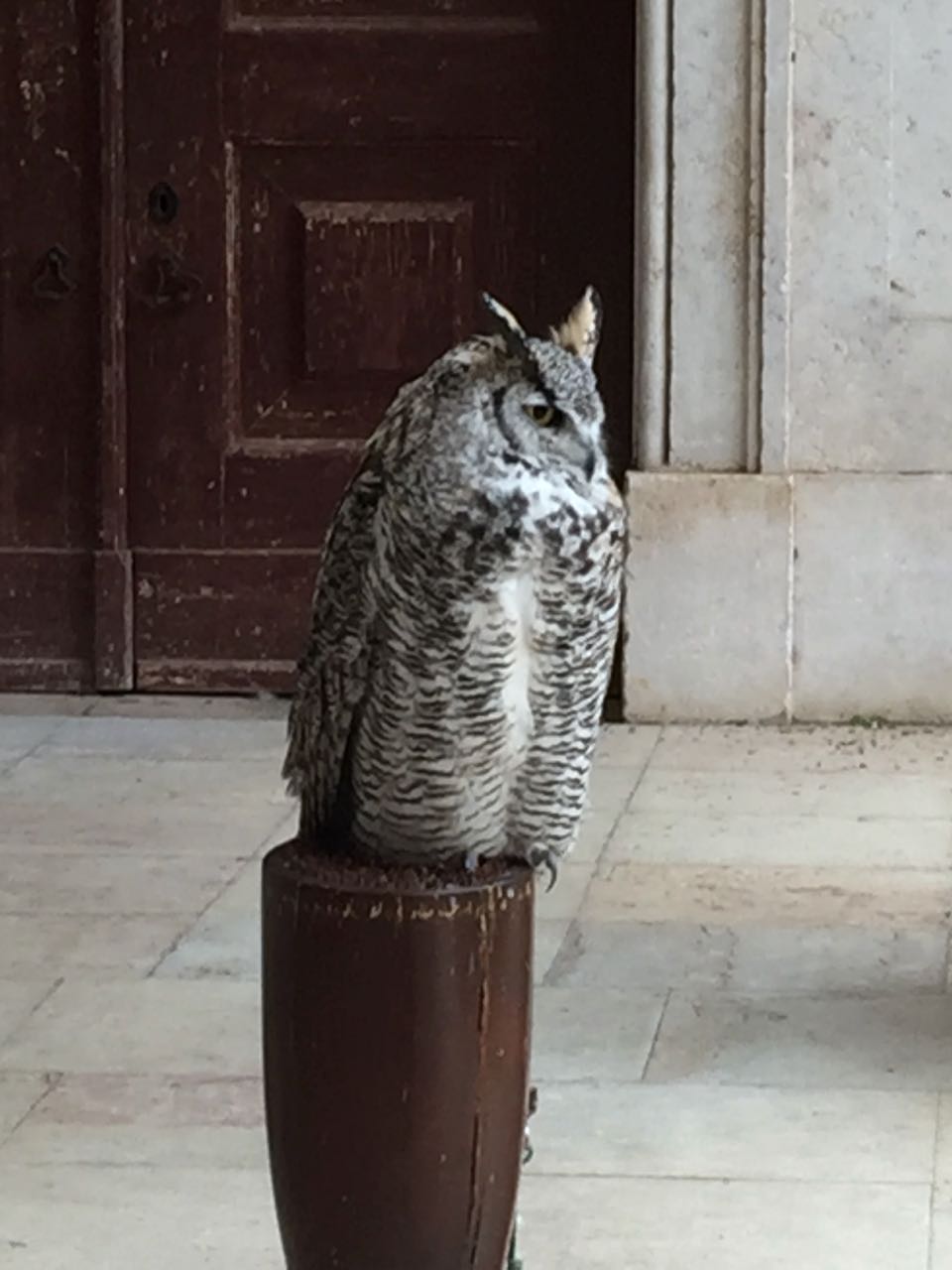 There’d be no more mice in the pool with this guy providing rodent security! 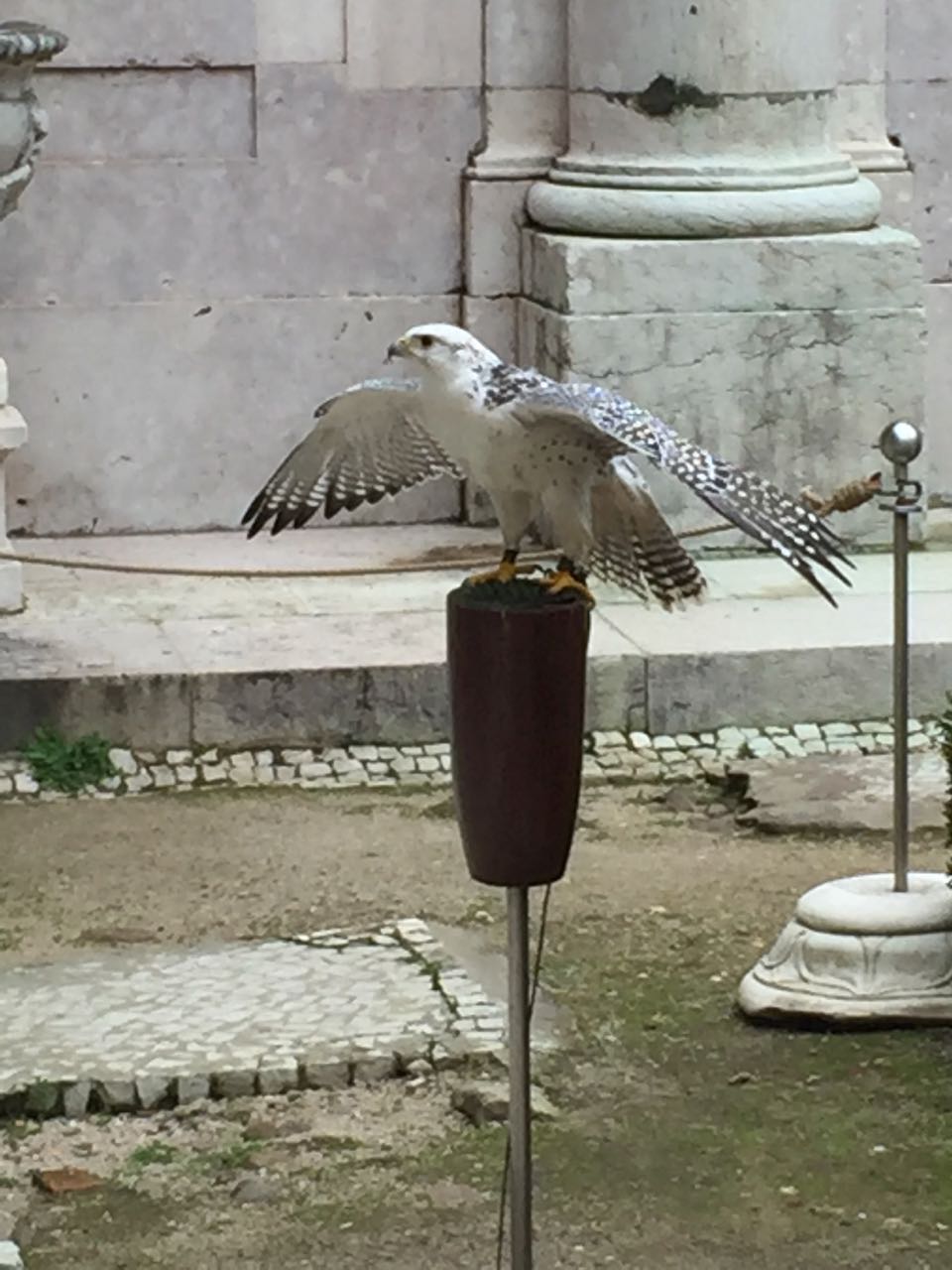 The falcon is preparing for lift off. He wouldn’t have gotten far, since he’s tethered. They do let them fly around without the tether after the tourists are gone… the falcons are particularly notorious for frequenting tetherless bars.

In the foreground is a red-tailed hawk. In the background is the photobombing falcon.

This little Tawny Owl cutie was my favorite. Can a meat-eating stone-cold killer of a raptor get any cuter than this? 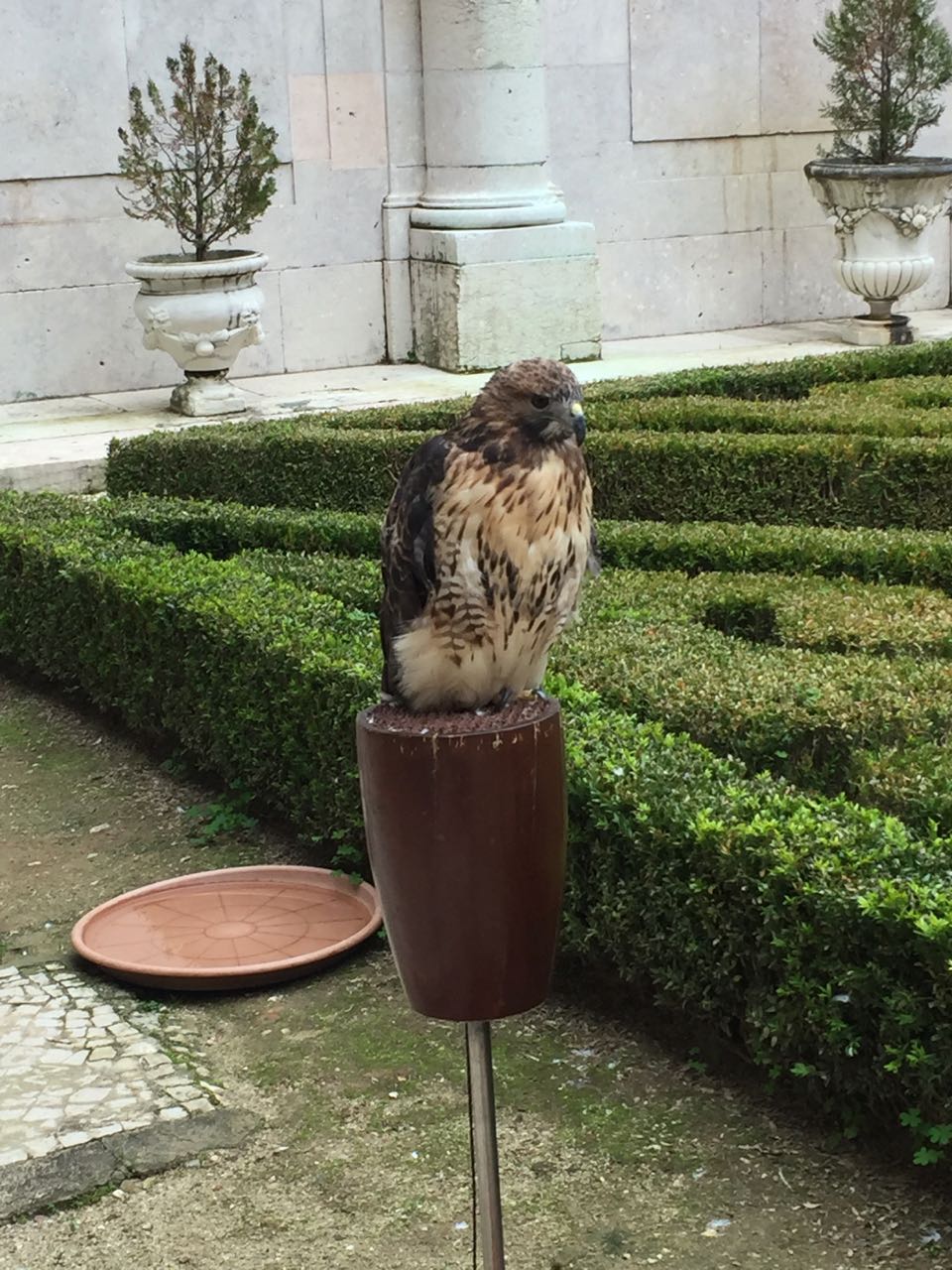 It’s not a great job, but hey, it pays the bills.

Once in a while I take a photo that almost makes it look like I know what I’m doing.

The group hug with an owl. Actually, we eschewed the group hug precisely because we didn’t want to get chewed.

This is the garden where the birds are kept. I tried walking through the maze but got lost.

Once inside the palace, we quickly found out why the royals were in such good physical shape. It takes twenty minutes to walk from the bedroom to the bathroom! 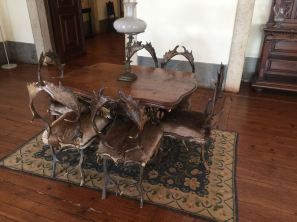 This is where the relatives of the king and queen hung out when visiting, you know, the unclers and auntlers. But seriously, this room featured chairs, sofas, tables, mirrors, and more, all made out of or decorated with antlers. The funny thing is that the room was right next to the nursery. Dunno if the royal babies ever suffered from nightmares. 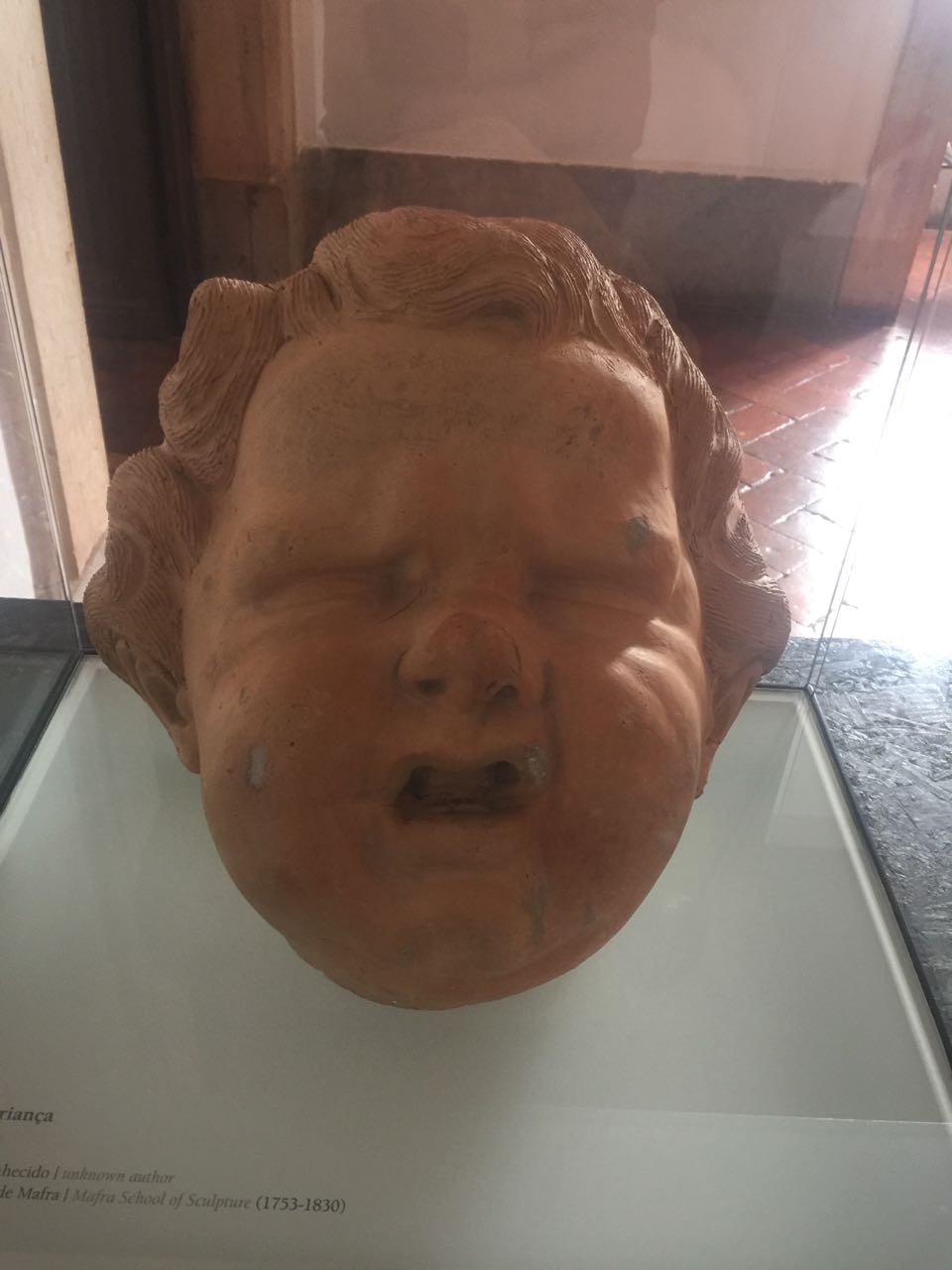 This is a row of statues that are smaller versions of larger statues on the property. Conversely, the big statues are larger versions of these.

I took a picture of this informational plaque because the library was so impressive and it contains more thorough information than I could otherwise provide (plus of course a welcome lack of bad jokes). If you read all the way to the bottom, you can see why I didn’t steal any of the books from the place. Going to hell for stealing a book seems like pretty harsh punishment, but this was before anyone thought of the three strikes rule.

I wonder if future generations will have rooms full of cell phones to show how we used to read everything?

In this library, if you’re too noisy and someone shushes you, the “sssshhh!” reverberates around the room for fifteen minutes.

Sandy is either taking a picture of the ceiling or protecting himself from owl droppings.

Okay, maybe it was the ceiling. 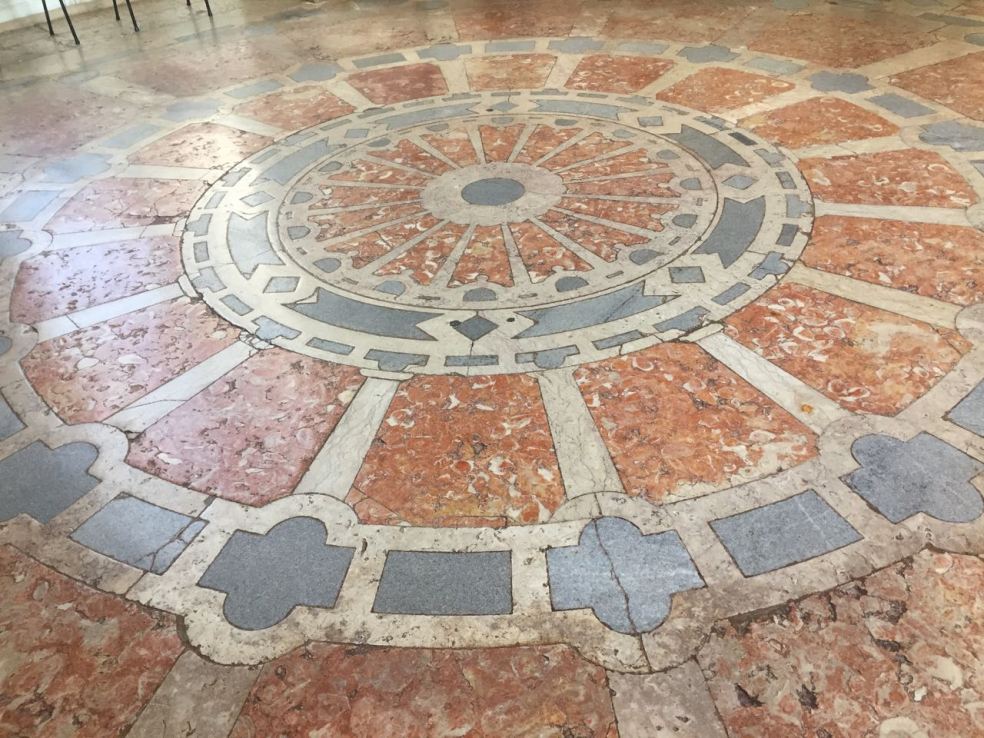 From ceiling to floor, there was artful decor.

I couldn’t stop stairing at this tree. Get it? Stairing? Oh, jeez, quit rolling your eyes (they may stick like that!) and just go on to the next picture.

This billiard table is so large you need a bazooka to shoot a ball from one end to the other.

As you can tell this grandfather is huge, er, grandfather clock that is. Between that, the billiard table, and the mile-high ceilings, either the royals were giants or the architect was in the process of switching to metric. 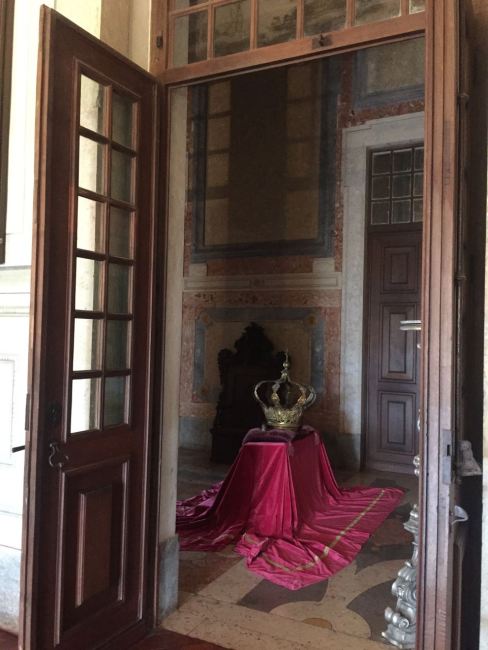 Heavy is the head that wears the crown. Although, did anyone ever weigh someone’s head back then? I know I’ve never had my head weighed. I wonder if insurance would cover that…

This is the infirmary, which might seem bleak to our modern eyes, but in the context of the times, wasn’t too bad of a place. Every cot had its own little room, and there is a chapel up front in case you need to communicate with heaven real quick like.

As we’ve seen before around Europe, they were awfully good at creating pictures that look like real sculptures. But to prove how slowly humanity sometimes progresses, it took hundreds of years to go from this to Jaws 3D. 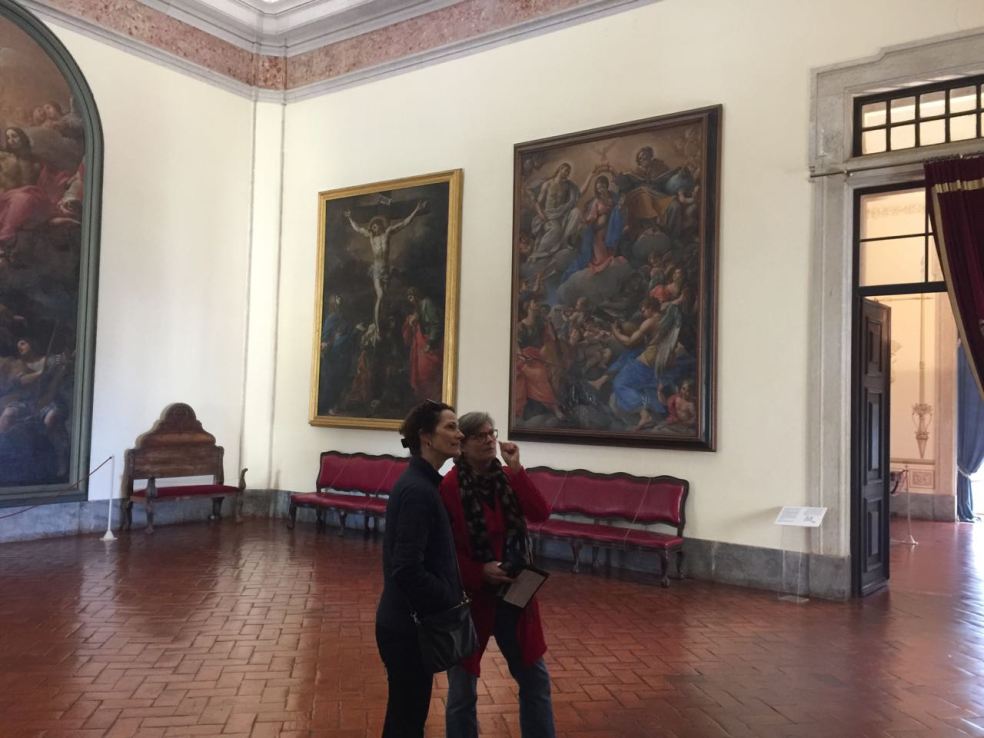 This is a model of the palace complex, which features a big ol’ basilica front and center. Because it’s all attached, the royals could just walk down the hall and watch a service without ever leaving the palace. You could also huck some gnarly spitballs onto the crowd below because, you know, you were a royal and everything. 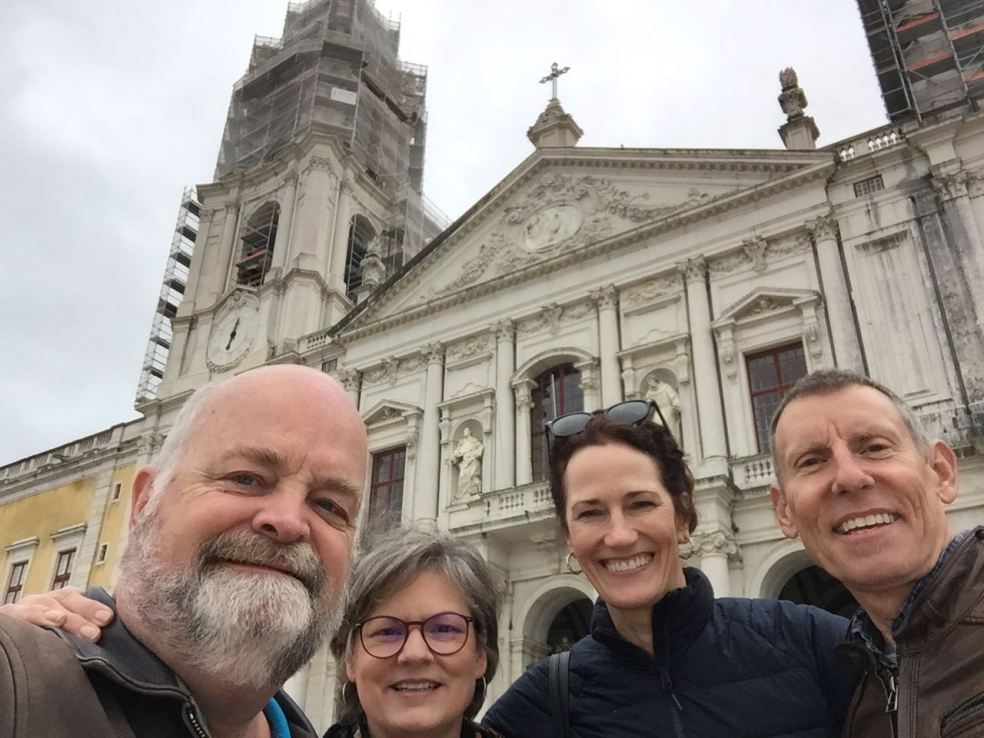 Here’s our happy group expressing their delight after a visit to what is one of the largest palaces we’ve ever seen. It was well worth the visit. If you come visit us, we’ll put it on the agenda. We’ll go owly to beat the crowds, unless you come in the winter, because there ain’t no crowds. There were times we had all 3,000 meters of a hallways all to ourselves. We lamented forgetting our bowling balls.

The Palace of Mafra.

During lunch, Angella kindly provided the answer to my question as to what the difference was between ordering squid with or without ink.

At the beach in nearby Ericeira. 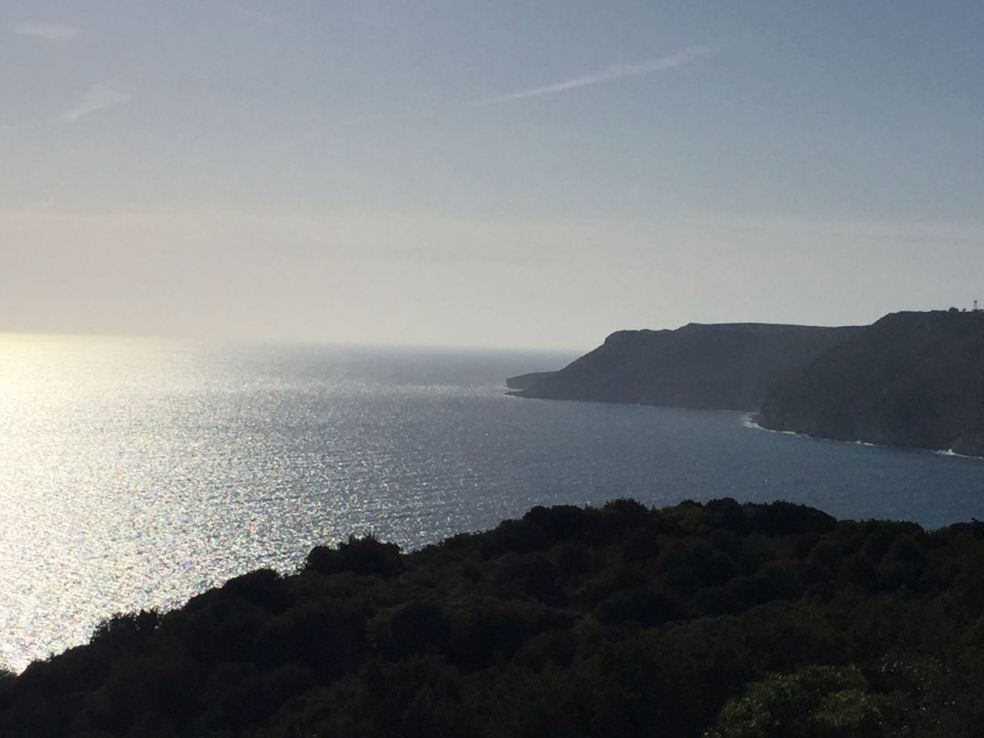 We finished up our trek by stopping to some of the great nearby sea views (as if we don’t live five minute’s walk from very similar views. But somehow, they never get old). It was a wonderful and relaxing way to wrap up a delightful visit to the town of Mafra.