I understand Roundabouts may seem like a small detail compared to the bigger issues you might usually consider when evaluating a country and its culture, such as food, weather, music, crime, and most importantly, the quality of their ice cream. On top of that, roundabouts are certainly not exclusive to Portugal; they’re all over Europe, although, excusing the pun, they have made a few inroads into the US.

But roundabouts are a great example of clever efficiencies other countries use that the US has been slow to adopt, so they get extra appreciation from us Americans. In Portugal, we almost never have to stop at a stop light or stop sign, other than occasionally on some side streets or downtown. Oodles of electricity are saved by eliminating the need for stop lights. Watt?

I’d be curious to know how long it would take to pay back the construction of a roundabout by eliminating said electricity. Even if it takes decades, using less energy to power anything that can be replaced with no power at all is good for the planet.

They aren’t without their challenges, to be sure. Portuguese drivers fully understand that when you’re approaching a roundabout, you will look almost exclusively to your left, and if anyone’s coming, you stop. Since every driver understands that, lots of drivers come barreling into the roundabout and stop only at the last second. Approaching cars already in the roundabout don’t pay them any mind, because they know they’ll stop; they always do. Of course there’s always that one time someone might not, which is what Americans like us worry about. Carolyn still jumps in her seat and eeks! a frightened exclamation every time that happens. After a year or two or ten of avoiding that one guy, I’m guessing she’ll be as steely-nerved as any Portuguese round-abouter.

The other challenge involves pedestrians. Pedestrians have the clear right of way in Portugal, as long as they’re walking in the “zebra” (which is what they call the thick-white-lined crosswalks). It also seems they have the right-of-way if they look in its direction as they approach it from down the block, or had a dream about doing it a couple of days ago. If a step inside the zebra is signaled by even a wayward glance, drivers better slam on their brakes or risk public humiliation.

On the other hand, if you, as a pedestrian, step into the street outside of a zebra, cars will not only ignore you, they will actually speed up and aim the front bumper right at your groin. I think this aggressive intolerance for jaywalking stems from all the times drivers have had to slam on the brakes when someone makes a move toward a zebra, even though, when taking on the pedestrian role themselves, they have often been the beneficiary of said behavior. Besides, there are more zebras here than an African veldt with no predators, so step into a crosswalk or risk your life.

Portuguese walkers are so confident of their rights-of-way that parents with baby carriages will blithely lead with the carriage without so much as a glance into the street. Or maybe they just don’t like their babies, I dunno. I’ve actually had someone dressed all in black step out right in front of my speeding car… at dusk… without looking either way. I swear I’m gonna take someone out one of these days, and it’ll be all my fault. 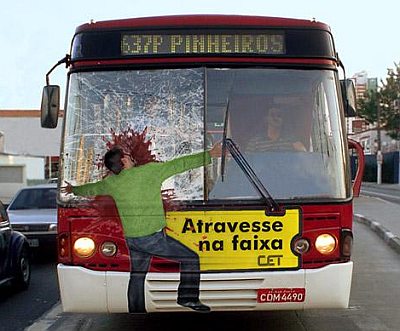 Despite their presence on our top ten list, roundabouts are the scariest in this regard. When you approach, you are looking intently to your left, ready to speed into the intersection ahead of the oncoming cars as you mentally calculate the speed vs. momentum vs. distance vs. the square root of an isosceles triangle vs. reminiscing why you didn’t pay more attention in physics class –and actually your physics teacher was pretty hot– and did you remember to turn off the iron? And then you have to factor all that in and compare to the risk and cost of the damage to your car and physical well-being should you have missed a decimal point in your calculations. And you have to do all that within the 1.2 seconds it will take for the oncoming car to hit you should your calculation be in error.

Meantime, to your right, an unconcerned pedestrian will simply start walking across the street, whether or not you’ve decided it’s safe to steer your car into his or her direction.

It’s best not to be chewing gum or otherwise be distracted when approaching any roundabout. I’ve learned to focus solely on driving, with eyes scanning back and forth like Arnold in The Terminator, especially when I’m driv 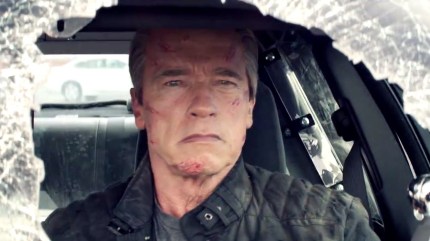 ing downtown. No music, no conversation, no screams of panic before I plow into another car. Don’t say nuthin.’ I’m on the hunt for wayward pedestrians.

Despite all that, roundabouts make our list at Number Ten because in the end, they make more sense, save electricity, get us to where we’re going faster, and occasionally improve our blood flow by increasing our heart rate. So you see, roundabouts are so awesome they even help you live longer… as long as you’re not a pedestrian stepping in front of an American driver.