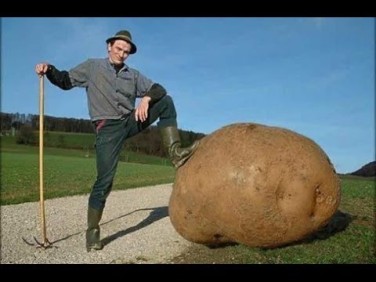 I recently complimented a young Portuguese man on his excellent English. He credited his skills to the Indiana Jones movies and the Cartoon Network. After I told him of our efforts to learn Portuguese, he told me, with some degree of sympathy, that Portuguese is ranked the sixth most difficult language in the world to learn.

Frankly, I’m more than happy to proclaim Portuguese the most difficult language in the universe to learn. Of course that’s a little self-serving, as it makes every word we memorize that much more exciting, like when baby has his first poo or getting a trophy for twenty-sixth place out of thirty in the first grade for taking the shortest pee break.

With a great deal of effort and hours of study, we’ve made it this far:

Me: “Hey, honey, I just memorized the word for banana!”

Me: “Yeah but they pronounce it different. It’s like ba-NA-NA.”

With that, you can see why I took such pride in memorizing the word for a potato, which is “uma batata.” “Uma” means “one” or “a.” The male version, which is spelled “um,” is pronounced just like a harsh grunt, which makes sense as a masculine word. This also means if you’re going to say “a grunt,” except make the noise for grunt instead of the word, you would say “oogh oogh.”

Nouns in Portuguese have either masculine or feminine attributes assigned to them. However, certain words, like “thank you,” are dependent on whether, as the speaker, you’re male or female. To cover the doubtful areas, such as if you’re a hermaphrodite, you default to male (in case you were wondering). By the way, the “o” at the end of words is pronounced “ooh,” just because you don’t earn sixth place by being the same as everybody else. So if you’re a man saying “thank you,” it’s like being surprised at seeing an obrigad. “Obrigad-ooh!” But don’t ask me what an obrigad is, we haven’t gotten that far yet.

As far as I can tell, everything that ends with an “a” is feminine, all the rest are masculine. Interestingly, the words for “transgender” and “asexual” are masculine, apparently because they didn’t want to bother with a third option. In any case, the powers that be who were responsible for assigning the genders way back when, apparently decided “potato” would be feminine. I won’t question the reasoning because men are just as likely to be shaped like a potato as women.

However, this must serve as proof that carrots must have had a different shape long ago, as the word for carrot is “cenoura.” Since it ends with an “a,” it’s feminine. That doesn’t make much sense to me, at least in regards to the shape of today’s carrots, especially when you realize that cucumber (“pepino”) is masculine, and rightfully so. But if carrot isn’t masculine, I don’t know how we’re supposed to figure this stuff out ahead of time, unless carrots used to be in the shape of potatoes. That’s the only way I can explain it.

Since we’re currently only armed with the total vocabulary of: please, thank you, sorry, I don’t speak Portuguese, banana, and a potato, I figured we could milk this thing for all it’s worth, especially since the Portuguese people are so patient and kind, even more so to foreigners. I thought, “wouldn’t it be fun to respond to nearly every question with a vacant smile and the simple retort of: ‘Uma batata?’”

At the check-out line in the grocery stores, we’re constantly bombarded with a machine-gunning of questions that sound like, “Porbridasush-issimorrr-shtush Continent shooma-mush-shoosh?” Which we figured out means, “Do you have a Continente card?” Continente is one of the largest chains of grocery stores in Portugal. The bigger stores rival the size of most sports stadiums, and contain enough supplies for several thousand people to weather the zombie apocalypse for a couple of decades. Especially since the dried cod would easily last that long. Sure, by year twenty their diets might only consist of dried cod and Twinkees, and they’d all smell like dead fish, but at least they wouldn’t be eating brains.

We assume that with a Continente card and a large budget you can amass enough points to pick out a prize from an awards chart that starts out with a small rubber ball and goes all the way up to owning your very own continent. We’re not going to shoot for that, however. Most continents have multiple languages, and we’re only up to “a potato” in Portuguese. Besides, we haven’t applied for a Continente card yet. An address that consists of “uma batata” probably wouldn’t get very much mail.

So far it has tickled us silly to see the expressions on the clerks faces when their query as to the status of our card-carrying membership is met with the answer, “A potato.” Granted, “uma batata” alone sounds funny to our English-speaking ears, so I think that aspect of the humor is lost on them. All they’re left grasping onto is the idea that perhaps Americans really are just crazy. Maybe we should say “batata” in an English accent so they can blame it on the Brits. Of course, we’ll still be giggling in an American accent. There’s only so much one can do.

There are all sorts of scenarios I can envision with this ploy:

Cashier at McDonalds,” What would you like to order?”

Ticket taker at a theatre: “Which movie would you like to see?”
Reply: “A potato.”

Irritated Cop: “May I see your license and registration please?”

Inside a confessional: “Bless you my son. How long has it been since your last confession?”

You get the idea. Again, “uma batata” just sounds funnier so you can substitute that for added humorousness, but much of the humor is in knowing what the inquirer is hearing.

As a result of all this spud-itity, I find myself constantly singing this song in my head: “uma batata, uma batata… it means no worries… for the rest of your days! It’s our problem-free, philosophy! I say uma batata!”

We’ll see if our ever-expanding vocabulary creates more fun for us as we pinball around Portugal, leaving baffled Portuguese in our wake. But for now, “uma batata” is providing us all sorts of entertainment in our retirement. It’s the little things that keep us happy these days.

One thought on “Would You Like Uma Batata With That?”