And this, dear reader(s)… (the “(s)” is just in case, there might be more than one of you), will be our last blog for a little while because we’re headed back to Bobadela and our spacious and nearly perfect apartment with the slight blemish of having no internet. As it turns out, I burned up all sorts of minutes by playing music through the iPhone as we drove here, so I probably won’t look at much on the phone either. I wish there was some sort of meter that showed up in the background telling you when you’re using minutes, because we had no idea we were burning up minutes faster than a pyromaniac in hell. Apple puts in these great technologies like “music from the cloud” but neglects to tell you that you’ll spend $50 on one road trip listening to them. Now we’re going to force ourselves to love the sound of rubber on pavement during our four hour drive home.

At any rate, we went back down into the heart of Seville, where the three main things to see are the streets and charm of old town, the Real Alcazar (as opposed to the pretend one), and the Seville Cathedral.

Here is the best of the 4,302 pictures we took today (give or take three or four thousand):

Next up was the Cathedral of Saint Mary of the See, better known as Seville Cathedral. It is the largest Gothic cathedral in the world as well as the third-largest church in the world. It was completed in the early 16th century, not long after Christopher Columbus sailed for the new world to “find out what all those Indians were doing over there.” It’s also the place where he’s now buried, as you’ll see below.

As mentioned above, Christopher Columbus is buried in this church, or at least half of him anyway. The rest of the bones may or may not be in Santo Domingo in the Dominican Republic. Or maybe even Cuba. In any case, since one of his sons and some other relative is also buried here they were able to do a DNA test to confirm that the bones in the coffin in this cathedral is actually that of Christopher Columbus. Not that he cares anymore. 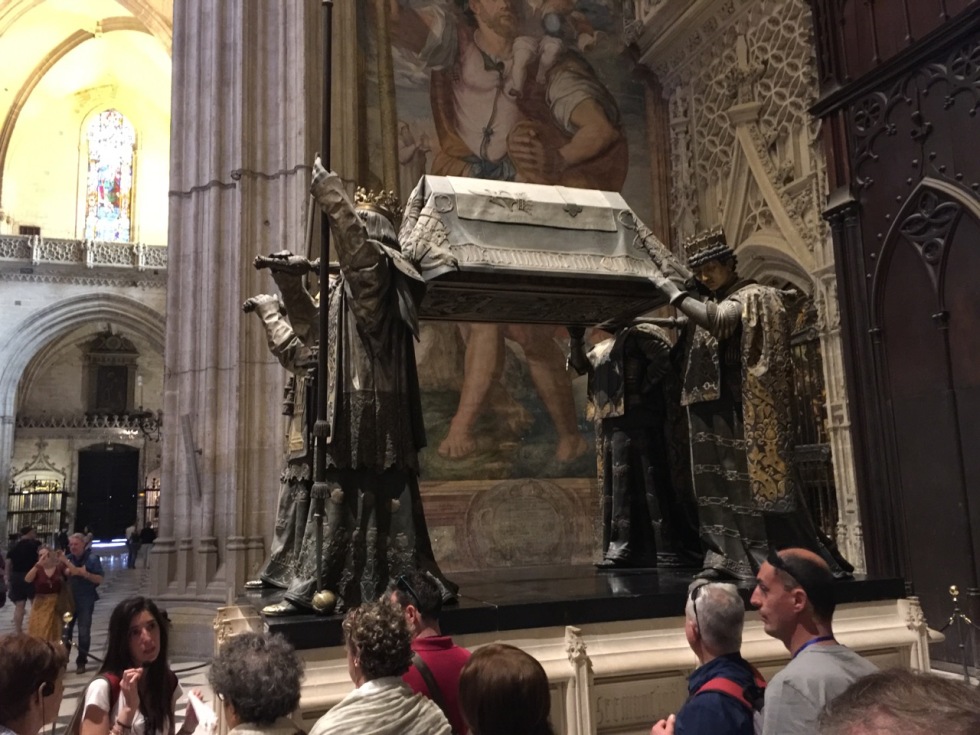 And this is the tomb. As you can imagine, Chris is a pretty popular figure around these parts. After all, if it wasn’t for him, there wouldn’t be any McDonalds or Burger Kings in the city!

The tower below is part of the cathedral. We walked all the way to the top, which I think was 143 stories or something like that. It was all via ramp, because the king who had the tower commissioned wanted to ride a donkey all the way up. We appreciated that, even though we didn’t get a donkey. 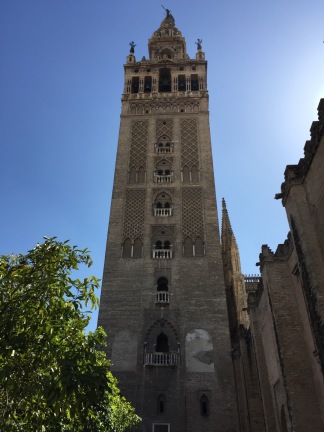 And here are the views from the top: 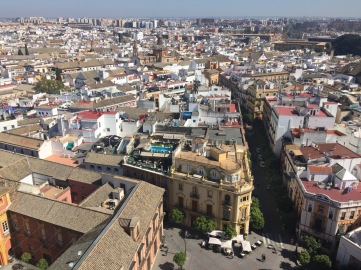 We also took a guided tour of The Alcázar of Seville, originally developed by Moorish Muslim kings. The palace is renowned as one of the most beautiful in Spain, being regarded as one of the most outstanding examples of mudéjar architecture (which is a combination of Islamic and Christian) found on the Iberian Peninsula. It is the oldest royal palace still in use in Europe. 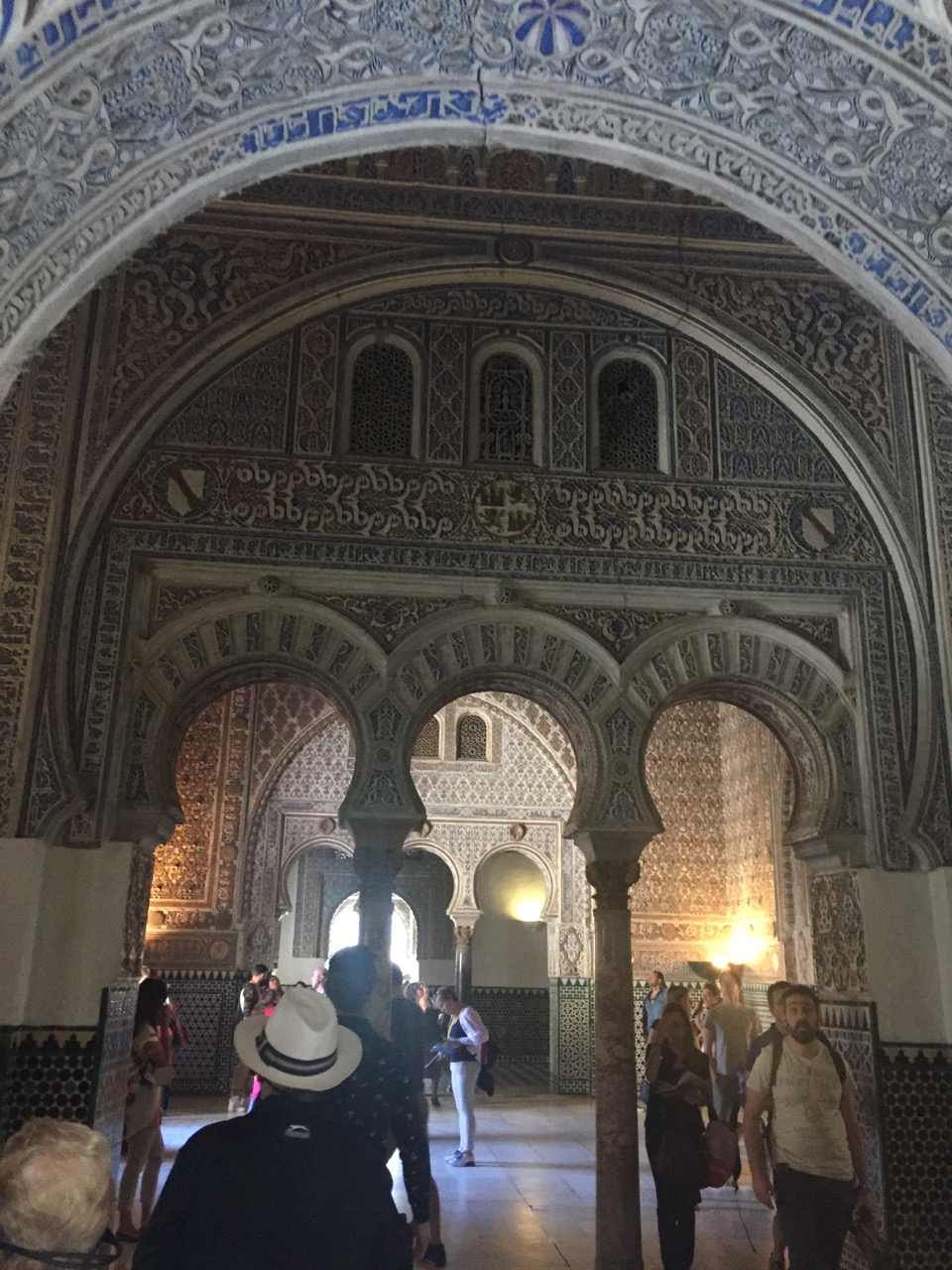 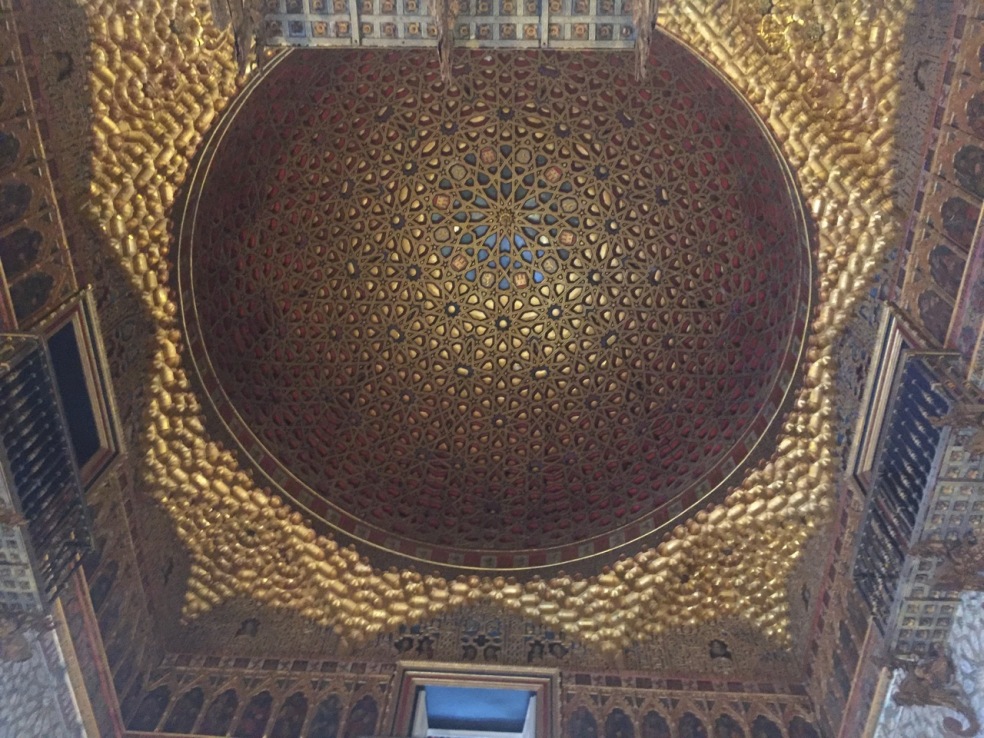 Much of the grounds are dedicated to a large garden area. Pretty and peaceful, and surely a cool place to come during the heat of the summer.

That’s it! We wrapped up our day by enjoying a late lunch with Gary, a gentleman from Seattle we met on one of the tours. It was nice to chat with an American-accented voice and share our experiences. He takes a month out of each year to motorcycle around Europe. We all agreed that more Americans should get beyond the borders and experience the world!