Today we began the search for our residence. Our transition helper and her real estate agent took us to about a half dozen properties. The first five were not quite what we were looking for. Since Lisbon is so old, much of the housing reflects that. Any construction prior to, say, 2000, tends to be somewhat cramped and certainly lacking in the amenities we’re used to in the US. Which is fine, we’ll be living in Portugal, which is, as we can tell by the fact that it has a different name, a different country.

The last place we looked at on this first day was closer to what we’re used to: more modern with higher ceilings and wider hallways. On this first go-round, we’re looking at flats or condominiums, which means we’re generally looking at living in a place where one false move can mean instant death. The Portuguese are clearly not as concerned with safety issues as we are in the US. 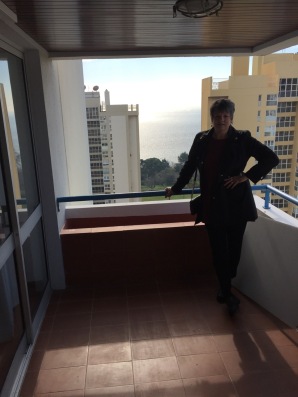 I’m not a big fan of heights, especially when the railings are below my waist. As I stand next to that kind of railing and look down, I can almost hear the sirens calling from below: “Jump! C’mon, it’ll be interesting! Just climb over the railing and see what it’s like!” Obviously, I’m not going to jump, but it’s disconcerting nonetheless. Our hosts gave me some strange looks as I staggered around the balcony with my hands over my ears, shouting “Shut up! Shut up!”

I rarely get drunk, and certainly not drunk enough to stand by a railing ready to topple over it, but I just can’t get it out of my mind that if I was too drunk and stumbled next to it or bent over too far, or someone pushed me (accidentally or otherwise), that the place in which I live could also be the place of my accidental death. It’s not actually a fear of heights as much as a combination of a fear of falling and a vivid imagination. I can just hear the wind whistling past my ears as the ground rushes up to greet my helpless body. It’s a weird feeling, and nothing I want to live with every day.

One of the places was on about the sixth or eighth or one hundred and tenth (same difference) floor, and even the windows in the kids room (!) opened right up to… air, and a long drop to a permanent sleep. 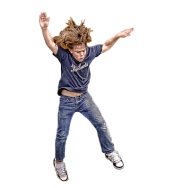 When we asked our hosts about it they just shrugged. Portuguese kids are smart enough not to fall out I guess. I’m not sure some American kids are as smart as that. If we bought a house with such a window and our grandkids visited, we’d probably tie a rope around them and affix it to the middle of the home.

Obviously, living in a high rise is something I’m not used to. Chances are, we’ll have to get used to it because housing around Lisbon tends to be mostly high rises. We’re not overly keen on owning a house with a yard, etc. We don’t want to spend much time caring for one, especially if we’re traveling.

The day wasn’t a complete loss, however, because while we didn’t find our personal Shangri-La as yet, we did finally sample some genuine Portuguese cuisine!

While frozen pizza and store bought burritos are clearly universal in their appeal, we are way behind the curve when it comes to eating Portuguese. People who ask us about Portugal seem more curious about the food than anything, and we’ve never had a good answer.

We went to small Portuguese restaurant for lunch, so authentic that the menu was available only in Portuguese. Fortunately, we were with two Portuguese speakers, so we received a thorough translation of all the offerings. 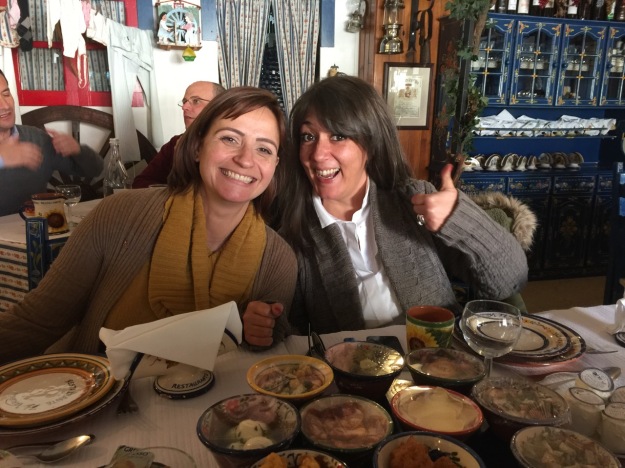 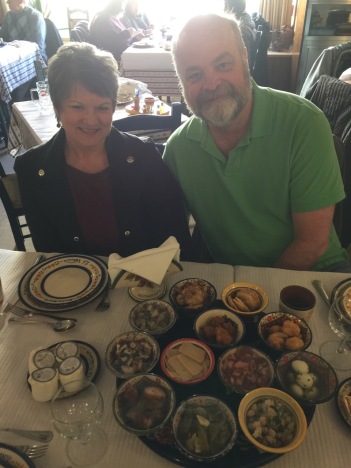 One dish was called “Açorda” (The ç in Portuguese is pronounced like a “z”), which is made from bread and milk and assorted spices, and in our case supplemented with shrimp. It was one of the favorites of our two Portuguese friends. To our pallet, it was slightly bland; it could’ve used a little more flavor.

It was plenty tasty to be sure, even if it looked like mushy porridge. I might’ve liked it better with some pork or meatballs or even chopped up hot dogs, but apparently they only put seafood in it: mostly shrimp, but often with no meat at all.

We also ordered a pork dish, which appeared to be about the size of a quarter of a pig. It was huge, but the meat rolled off the bone like pulled pork. Delicioso! We then sampled a variety of desserts, which of course were all great because they were, well, desserts. 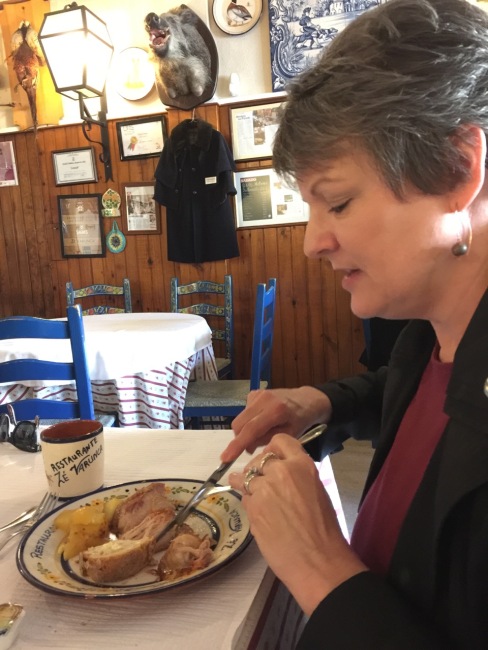 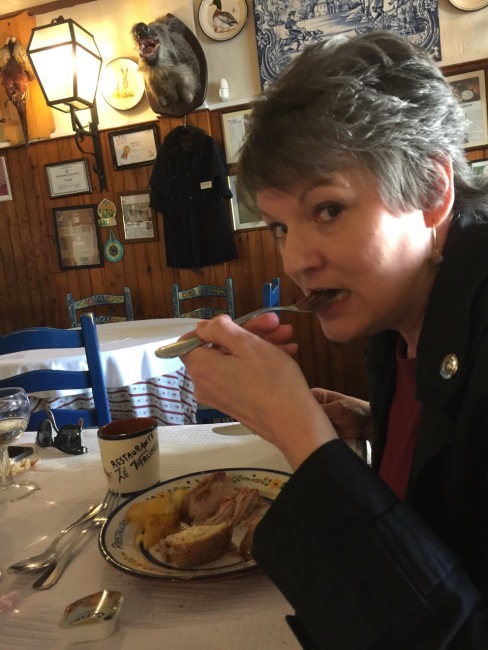 So we finally took the lid off Portuguese cuisine, and found it to be very good.

We will clearly have no issues with Portuguese food; of course this is based on a total of one restaurant so far. At least from our single sampling, we found that it wasn’t particularly exotic or excessively spicy; they generally seem to offer a good variety of dishes and meats and so on. They also love cheese, which is fine by us.

As to the house hunting, we have to content ourselves with a combination of being eager to get it done, and the patience to find just the right housing. It’s a big city, and property values are on the rise, so it’ll be an interesting dance. We’ll hold out for the perfect place (and price) as long as we can; if that fails, we’ll settle for plan B, or maybe Plan C, which will include a rope for the grandkids.

3 thoughts on “So begins the house hunt.”