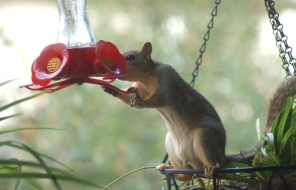 (I call Carolyn a hummingbird because she’s always flitting about with as much energy as one. If she were an animal, she’d either be a hummingbird or a squirrel.)

Prior to our departure, we were often asked if were excited to be going to Portugal. Both of us had pretty much the same reaction: sure, but we were really just more ready than anything. The lead-up to the flight had us busy for months: selling the house, getting everything in it sold, staying at my sister Lynne’s house (with much, much gratitude for putting up with us for months), seeing and saying goodbye to everyone, packing, canceling things like insurance, and so on and so forth and so on.

But mostly, we felt like we were in limbo: homeless, without roots, waiting for our long flight and new adventure.

They say it feels like time moves ever faster and faster. I dispute that notion: it only moves faster in hindsight. I figure that’s because your memory compresses even a full year into an easy-to-digest matter of seconds. When you’re looking ahead, it crawls just like it did when you were a kid waiting for a trip to Disneyland. To us, it seemed like a long time between retirement and trip, so we were simply ready.

The 9-1/2 hour plane ride from Portland to Amsterdam was uneventful. Neither of us slept much; I ended up watching three movies, Carolyn two. At one point I was finally able to doze off, only to be awoken by a very loud-voiced knucklehead standing in the aisle talking to some babe in the seat across the aisle from me. I almost said something, but in the end decided to throw on my headphones and watch another movie.

After a four hour layover in the Amsterdam Airport Schiphol, we boarded the plane for the 2-1/2 hour flight to Lisbon. 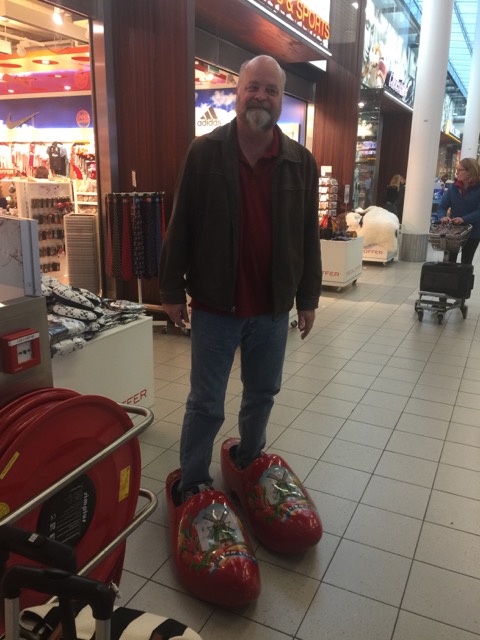 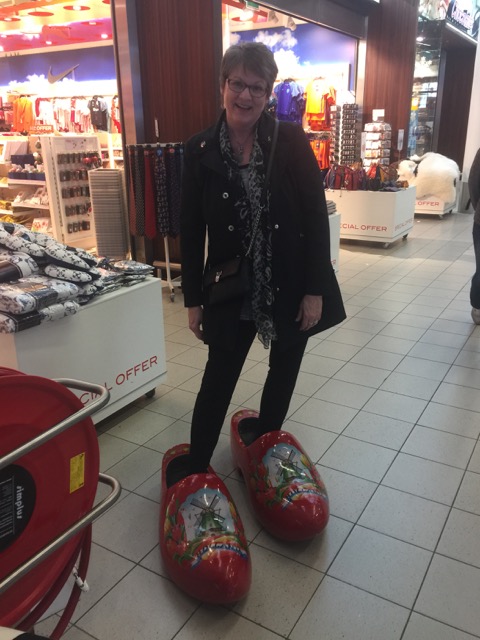 I found it interesting that other than going through security in Portland, w

e only had to pass one customs checkpoint, which was in Amsterdam when we switched terminals. He was a very nice guy who only checked our passports. After we landed in Lisbon, we picked up our luggage and walked through the “nothing to declare” door (of course, I had to challenge authority by saying, “I do declare Mr. Beauregard!”) (For you non film buffs, that’s a famous line from both Gone with the Wind and the much higher regarded Ace Ventura).

Anyway, the point is that we didn’t have anyone in Portugal even pretend to inspect our luggage (within our view anyway) or otherwise acknowledge our arrival, and our multiple carry-ons were never even looked at by anyone other than the machine in Portland. Going from Amsterdam to Lisbon was no different than flying from state to state in the US.

After exiting the airport, we were delighted to find ourselves in 60 degree weather, especially after the continuous cold snap and snow Portland has been experiencing. We cannot complain about the weather in our new home!

We had rented a small Airbnb flat in Cascais, which is about 30 minutes outside of Lisbon and a prime location for us to buy.

We got to sleep around 8:00 PM after about 30 hours near-sleeplessness. We decided to make the first day all about getting over jet lag. After a nice long sleep (only bothered a bit by walls that are just too thin for Americans) and a restful day, I think we’ve mostly conquered that, even though traveling from west to east is usually the more difficult transition in regards to jet lag. We woke up about 10:00 AM, reasonably rested, but with few food supplies.

After our visit to Portugal last spring, people often asked us about Portuguese cuisine. To help illustrate our incredible culinary expertise, we can use our first full day in Portugal as a great example. On this first day alone, we have consumed a small frozen pizza, a bag of potato chips, and an apple (we each got half). We might have a banana before we go to bed. So yes, it’s clear that we are able to tout the awesomeness of Portuguese cuisine.

Because the Lisbon area is so hilly, there are many places where you can enjoy a view to die for (literally, if you jump). The first three pictures below are scenes from the rooftop of the building we’re staying in. The next three are the views from our window, which is on the sixth floor. They’re mostly views of Cascais; Lisbon is way off beyond the hills to the left in the very first picture. 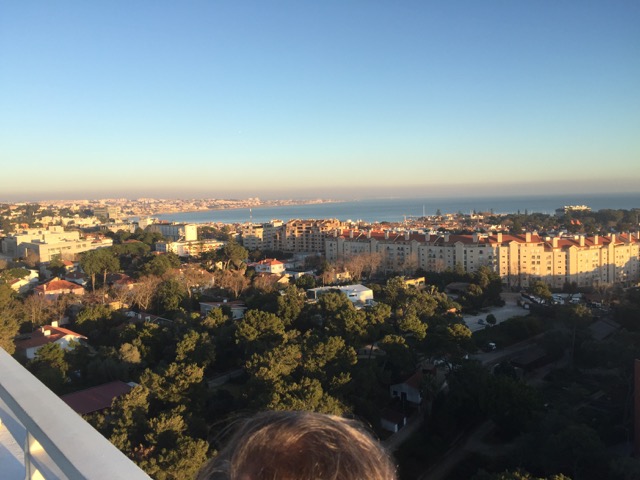 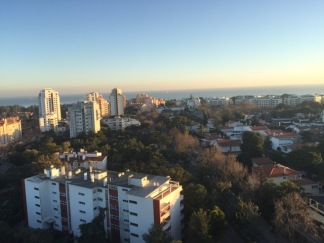 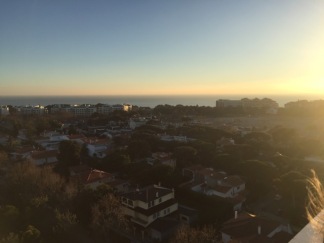 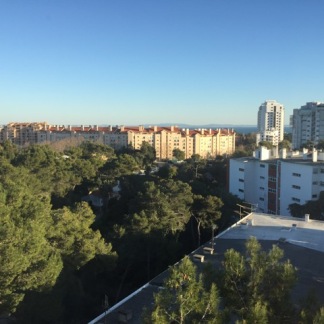 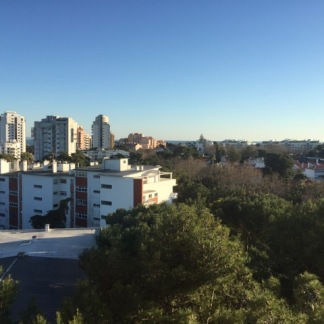 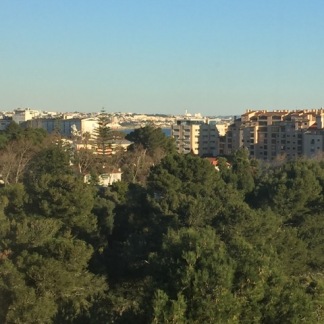 I did have to run to our favorite store (so far) in the Lisbon area: Jumbo. It’s a huge Fred Meyer-esque place for all kinds of groceries, home goods, liquor, and electronics, as well as featuring banking, a laundromat, an airplane hangar, a petting zoo, and hula dance lessons. Maybe if we’re lucky we can find an apartment right above it, we’d never want for anything.

But I immediately remembered what a challenge it can be to buy groceries in a country that doesn’t realize everyone in the world should speak english. I utilized my iPhone frequently to translate all sorts of words. I wanted to make sure I wasn’t buying dog meat instead of ham, for instance. Simply going to a grocery store will help us in our quest to understand Portuguese, although I’ll confess that I don’t remember a damn word I learned while in the store. Repetition will be our friend.

I did try to mutter a few of the phrases we’ve “mastered.” I tried out ”deshkoolpa” a few times (“desculpa” means “excuse me”) after I accidentally ran into people, but I’m certain I spoke so quietly no one even heard me butcher that single word. I spoke quietly because when my memory is put to a stress test, I have a hard time pulling out the word. It’s one reason I’m so bad at remembering names. Sitting here writing, for instance, I can remember just about anyone’s name. But when confronted with an introduction, I barely can remember my wife’s (you know, what’s her face). I almost said “Obrigado” after running my ca 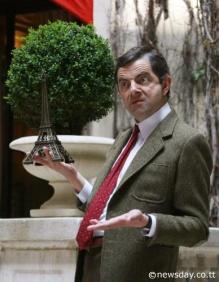 rt into someone else, which means “thank you.” “Desculpa” came into my head about two minutes later. Mr. Bean has nothing on me.

I also tried to tell the checkout clerk that I was American (“Eu, uh, es su, ah Americano!”) as I fumbled around with the credit card machine, but I’m pretty sure she inwardly rolled her eyes while thinking, “Well, duh!”

Fortunately, Cascais has a bit of tourism, so the locals there are used to non-Portuguese speakers trying to make their way. When we’re finally fluent in Portuguese in about 2027, our location within the country won’t matter as much. But for the first number of years as we flail about mispronouncing or misusing every word we speak, being around people who are used to being around dummies like us will be an advantage.

Friday we begin looking at flats (Ha! See- I’m already mastering British english!) in an area between Cascais and Lisbon. We have a 90-day deadline to buy two properties before they kick us out of the country, although based on the way we entered it, I’m not even sure the authorities know (or care) we’re here!

2 thoughts on “The Eagles –er, Hummingbirds, Have Landed!”