By that I mean the driving in Ireland. I have fully given up the idea of trying to navigate without Siri, but even that is problematic.

Virtually every time I’ve tried to chart a course from the house to our ultimate destination, thinking I wouldn’t need the often unintelligible voice of Siri telling me when to turn, I’ve looked at a map and said, “This looks to be a straight shot. Just this one highway change and that’s about it.”

And virtually every time we’ve gotten about halfway there, we’ve ended up, instead, listening to Siri give us about 28 turns and direction changes. At times I’ve had the iPhone balancing on my knee, trying to shift with my left hand without dropping the iPhone on the floor of the car, while Carolyn pokes at a map spread in her lap shouting “turn here! turn here!” while I’m screaming, “What? That’s not what the map on the iPhone is showing!” while Siri’s unemotional voice is telling us to turn down a road whose signs (if there are any) bear no resemblance to what she’s saying, while three Irish drivers are honking their horns and flipping us off (not really, Irish drivers are actually quite polite) all the while trying to enter a two-lane roundabout without creaming someone. (I have no idea why they ever have two lanes in their roundabouts because everyone just treats them as one). We almost got T-boned in a roundabout when I originally and erroneously assumed two lanes meant that they’d actually use them as two lanes. I’m pretty sure the other driver threw a few “feckers” our way, which is the way they say the “f” word. 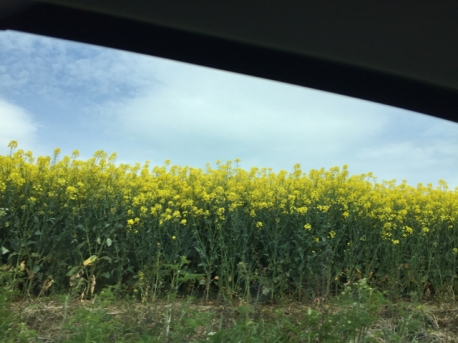 Somehow we always get to where we’re going (and usually with some very pretty scenery along the way), but the map, Siri, and reality often bear no resemblance to each other.

Today we embarked on a sort of “B” list excursion, having either seen or eliminated all the A-list destinations we could find. The destination was ultimately Waterford, the home of Waterford Crystal and the “Viking Triangle,” which, apparently, isn’t actually the favored instrument played by the 8th century Viking choruses while they sang, “All By Myself” like I thought.

Anyway, our first stop was the Dunbrody Famine Ship (they were also known as “coffin ships”), which is a museum and a recreation of the vessel that hauled multitudes of Irish to America during the potato famine in the 1840’s. During the famine, approximately 1 million people died and a million more emigrated from Ireland, causing the island’s population to fall by between 20% and 25%, and McDonald’s french fry sales even more.

Despite the sad theme, it was a pleasant exhibit, made more entertaining by a lively tour guide and a couple of actresses who portrayed passengers. It certainly makes you appreciate what we have, because that was a pretty rotten stretch of life for many in Ireland, but resulted in America being heavily influenced by the lineage of the Irish.

Anyway, here are our pictures:

From there we drove to the town of Waterford, which is a bit more industrial than most of the other towns we’ve seen. It is Ireland’s oldest city, and its name is the only one that came from the Vikings, who originally settled it.

Reginald’s Tower is the oldest urban civic building in Ireland, and the oldest monument to retain its Viking name. To this day, it remains Waterford’s most recognizable landmark, so that was our first stop.

Reginald’s tower is the old round thing to the left.

In honor of Mother’s Day, I could help but snap this picture from one of the exhibits, showing that perhaps mothers weren’t always the warm and cuddly source of love and solace they are for us today.

Otherwise, it was a nice little stop and an interesting old tower. Certainly not worth going way out of your way or anything, but we did learn a little history about Ireland, which has a lot more Viking in it than most non-historians might realize. 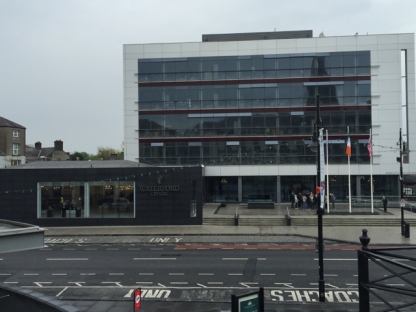 Just a block away were a few other attractions. One was the Waterford Crystal plant, which isn’t even a plant anymore since the company went out of business, but then was eventually purchased by Fiskars, and now they make their crystal in other parts of the world, so this is now simply a visitor’s center.

The other was the “Bishop’s Palace,” which is an 18th century residence converted to a museum. We knocked it out in about 45 minutes, but it had some impressive Waterford Crystal items in it which made us feel perfectly fine about missing the Waterford visitor’s center.

From there we made a short drive and a short ferry trip to Waterford Castle, which is really a hotel and golf resort made out of a converted 16th century castle on an island. Carolyn was quite smitten with it, but it’s not really a tourist destination. Anyway, you can decide if the photos smite you as well.

So I have to admit that this probably wasn’t the most exciting blog, but hey, we’re the ones who lived it, sparing you the torment and torture of living through the B-level Irish attractions.

Besides, things are going to perk up real quick because tomorrow we’re flying to Lisbon, Portugal!