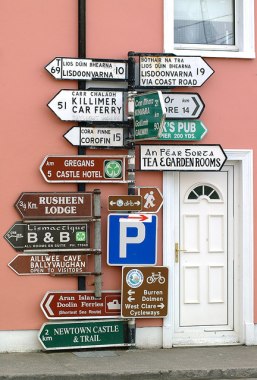 Driving in Ireland presents some challenges. Aside from driving on the left and negotiating some incredibly narrow roads, in Dublin you have two additional things to contend with: traffic and non-existent street signs.

When charting a route from where we are into downtown Dublin to see Trinity College and The Book of Kells, this is what I wrote down:

On Google Maps, it looked like a straight line from when we first got on the freeway to Trinity College. So other than the road names changing every couple of miles, it looked easy-peasy.

Except once you’re on the N7, which is supposed to turn into R110, there are no signs indicating when that happens. And the straight line doesn’t end up being a straight line when you’re forced to turn right or left at some random intersection. Before you know it, you’re heading to Belfast or London via the Irish Sea.

Very few streets have signs on them, and the number of signs indicating that you’re headed toward M50 or M9 or whatever are few and far between. Despite that, one way or another we managed to get close enough to the college and found some parking. Phew! 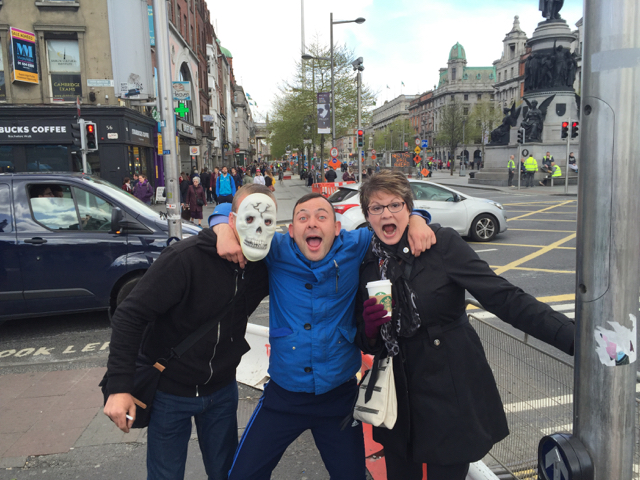 On our way to the college, we were accosted by these fun-loving Irishmen, who asked where we were from when they saw us taking pictures. After posing for a picture, they began yelling, “Trump! Trump! Trump!” They were clearly either inebriated, brain damaged, or they really hate America. 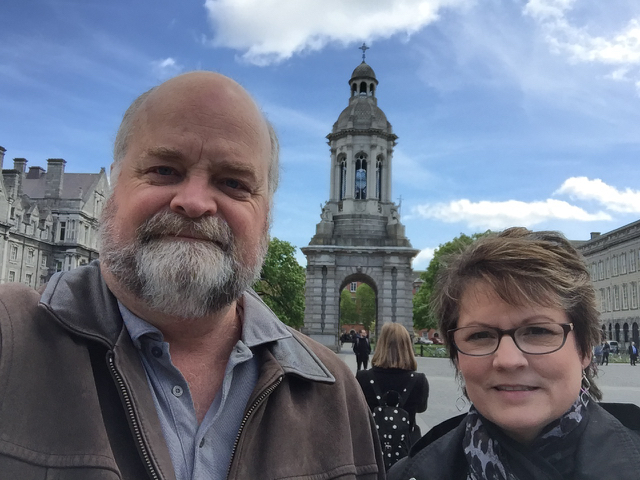 Trinity College was founded in 1592, just shortly before I was born. It’s the top university in Ireland, and is famous for housing the “Book of Kells,” which we’ll get to shortly. 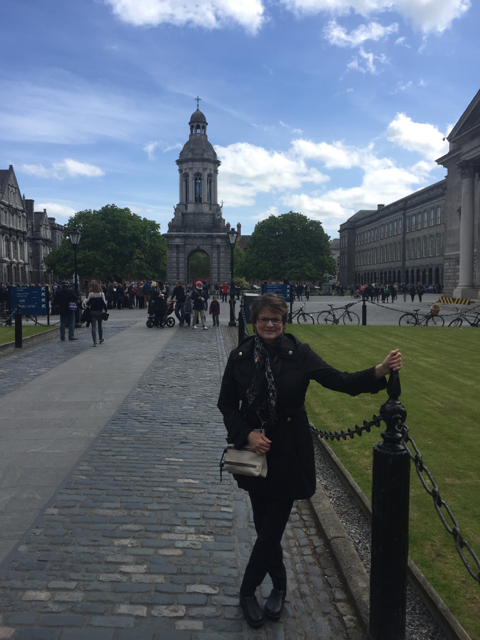 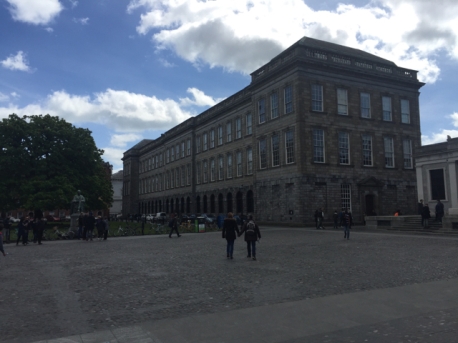 The campus is quite beautiful, with many old buildings that date back hundreds of years.

This music student took us on a 30-minute tour of the campus. He does the job as a way to assist with his expenses. Like so many enlightened countries, college is free in Ireland, but of course you still need some money to eat and get haircuts. Well, maybe just eat.

This beautiful tree was in the middle of the courtyard, and actually is responsible for helping to keep one of the buildings from collapsing for a third time. Why? Because the campus was built on marshy ground, and the first two attempts in the construction of one particular building ended in collapse both times. Between the river retreating further from the campus and the planting of these… wait for it… imported Oregon Maples… the third time was the charm. The Oregon Maples apparently suck up a ton of water, drying the ground even further. Who would’ve thunk Oregon could have helped Ireland by drying something out?

This is a “sphere within a sphere” bronze sculpture in front of the library. It spins if you push on it, and has matching pieces in more than a dozen places around the world, including Tel Aviv, The Vatican, The University of California Berkeley, as well as the inside the kids play area at a McDonalds in New York. Except the latter one doesn’t spin on account of the Kid’s Meal toy that got stuck in the gears, and is covered in smears of ketchup, milkshakes, and snot.

After going through the tour we went into the library, which houses the Book of Kells. The Book of Kells is a famous illustrated book of the Gospels written in Latin, and dates back to about 800 AD. It was named the Book of Kells because it was held in the town of Kells for a long time before being donated to Trinity College. Which means that it’s a good thing that it wasn’t originally written in Intercourse, Pennsylvania.

They don’t let you take pictures of it, but they had a big exhibit with lots of close-ups of the incredibly detailed artwork. Amazing what can be accomplished without computers and the patience of a saint.

But for us, the place that took our breath away was the Long Room, the home to over 200,000 Very Old Books (Or VOB’s, as they’re known in the trade). It is known as one of the most impressive libraries in the world, even surpassing the one in Wilsonville. It was simply amazing… not sure the pictures do it justice, but it actually was a more impressive exhibit than the Book of Kells was for us.

Lots and lots of VOB’s. 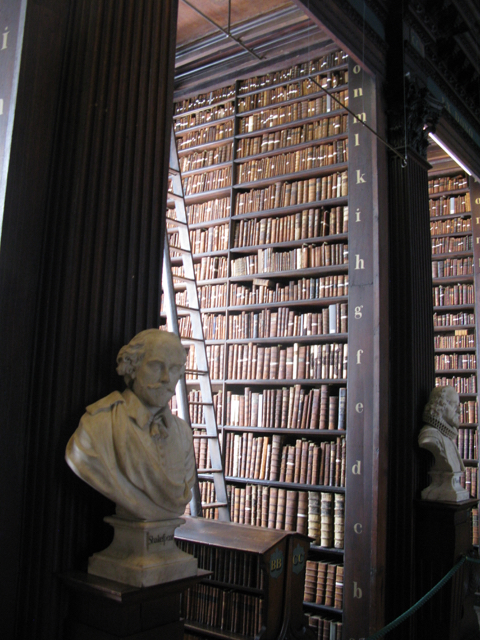 The books are arranged by size, which is great for aesthetics, but sure made searching for the book you want a challenge unless you knew ahead of time how tall it was. True story.

Busts of luminaries such as the philosopher Socrates (pronounced So-Krates), who achieved worldwide fame due to Bill and Ted’s Excellent Adventure, line the hall.

They also had the world’s oldest surviving Irish harp on display, and is the model for the emblem of Ireland, as well as Guinness Beer’s logo. 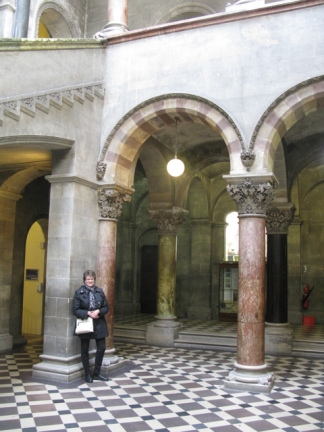 This is inside one of the study halls. A pretty cool scene to greet you every day as you walk into class. 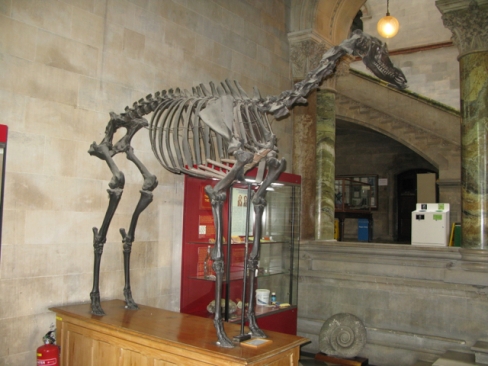 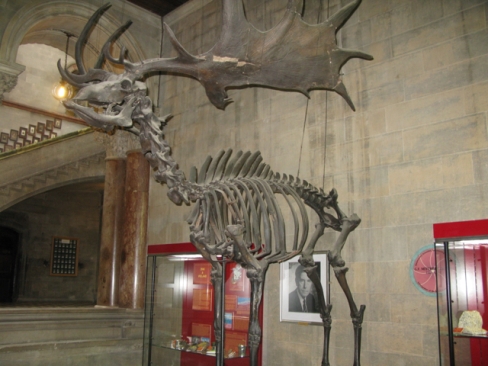 They also had the skeletal remains of Bullwinkle on display there as well. Or maybe they were extinct deer, I can only remember so much.

From there we wandered over to see the Dublin Castle. Unfortunately, by the time we got there they weren’t handing out any more tickets for the day. It’s a fully restored castle, unlike so many of the others we’ve seen that have been cleaned up but not restored. We both prefer the unrestored castles that let you in even if you show up at 3:00 PM. 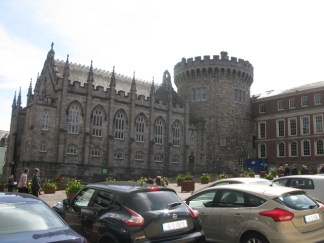 Still, we were able to get into the courtyard. It’s an impressive building, and we may be back to see it later in the trip. Stay tuned! Don’t touch that dial! 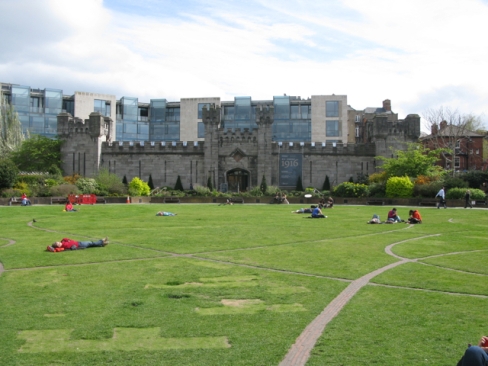 From there we went to the Chester Beatty Library, which is an exhibit of the collection amassed by Warren’s brother. I think. Anyway, it was interesting, and free, and I’m sure delights many an aficionado of old religious and Asian art, but it wasn’t really our cup of tea, and we soon wandered back to the streets in order to find our car. 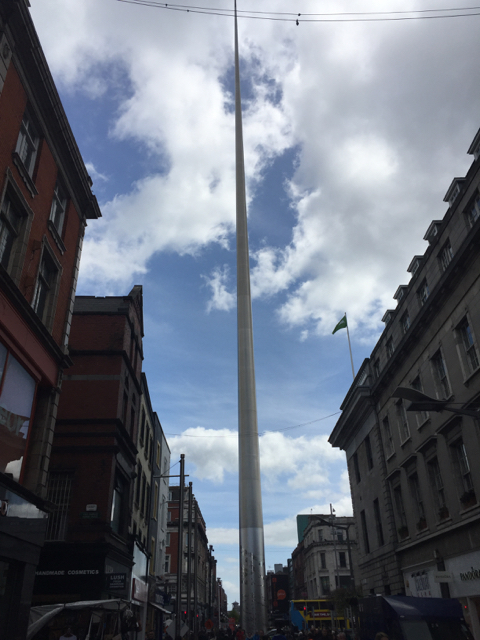 Along the way, we passed by this 400 foot steel sculpture, which was a monument to the 1st place finish Ireland had in the prestigious World Crocheting Tournament held in Serbia in 1988. Either that, or it’s called the Spire of Dublin. My theory is that it’s an example of what it would look like if Google Maps really did plop a real live pin in the middle of the city.

The River Liffey flows through Dublin, and looks great from this angle.

Unfortunately, it doesn’t look so great when you look down in it. Apparently “Liffey” ain’t full of “lifey.” At least not anything that wouldn’t star in a horror film.

Lastly, our drive back from downtown Dublin to our house just outside of Kilcullen was something right out of the Twilight Zone. We have Siri on the iPhone GPS, but I like to use that sparingly because even with sparse use, I’m really going to be squinting my eyes, opening them ever so slowly, when I look at our AT&T bill. Hitting the GPS regularly surely racks up the charges, even with the international plan we bought through AT&T, so I tend to turn it on, get our bearings, and then turn it back off.

But since we were in rush hour, and in no big need to get home at any particular hour, we decided to try the old fashioned way of navigating… by map. But not only is Dublin’s rush hour traffic pretty much standstill, the lack of street signs keeps you guessing the entire way. On top of that, long lines of cars get backed up in two lanes, and it isn’t until you get to the intersection that you realize you really needed to be in the other lane. And despite their reputation for Irish friendliness, when it comes to trying to butt in line with a car, most of ’em ain’t havin’ it. Despite that, I got away with it a couple of times, shouting, “We’re just stupid Americans! Get off our backs!”

Anyway, we’re tootling along, moving away from Trinity College and Dublin Castle, and we get a few miles away after driving about 45 minutes, but then have to take a turn we didn’t want, so we drive another few minutes through some back streets, and lo and behold, we’re passing right by Dublin Castle again. I swear we were transported in front of it like in a Twilight Zone episode. 45 minutes to get away from it, five minutes to be right in front of it again.

So I finally gave in, and we turned on Siri and the GPS and she found a way out of town lickety split. It helped that by that time most of the rush hour traffic was already dispersed since they actually know how to get home.

The AT&T charges will be worth it.