It’s Planes, Trains and Automobiles! (one of Kevin’s favorite movies ever):

If it all works perfectly, it’ll be a minor miracle!

Day one: Portland to Amsterdam

It’s about a 9-1/2 hour non-stop flight from Portland to Amsterdam, or as I like to call it because this is a family website, Amsterdarnit. The route that takes the plane over Greenland and Iceland, where it was largely trouble-free with only a few bumps here and there. After a couple of movies and some reading and a few failed attempts at shut-eye (we were, after all, traveling all afternoon and into the evening, arriving at around 11 PM our time, which 8 AM Amsterdam time, meaning we started the day here with virtually no sleep– I know, I know, poor little us), suddenly we were in Holland! The Netherlands! Make up your mind! Why do you have two names? Amsterdammit! 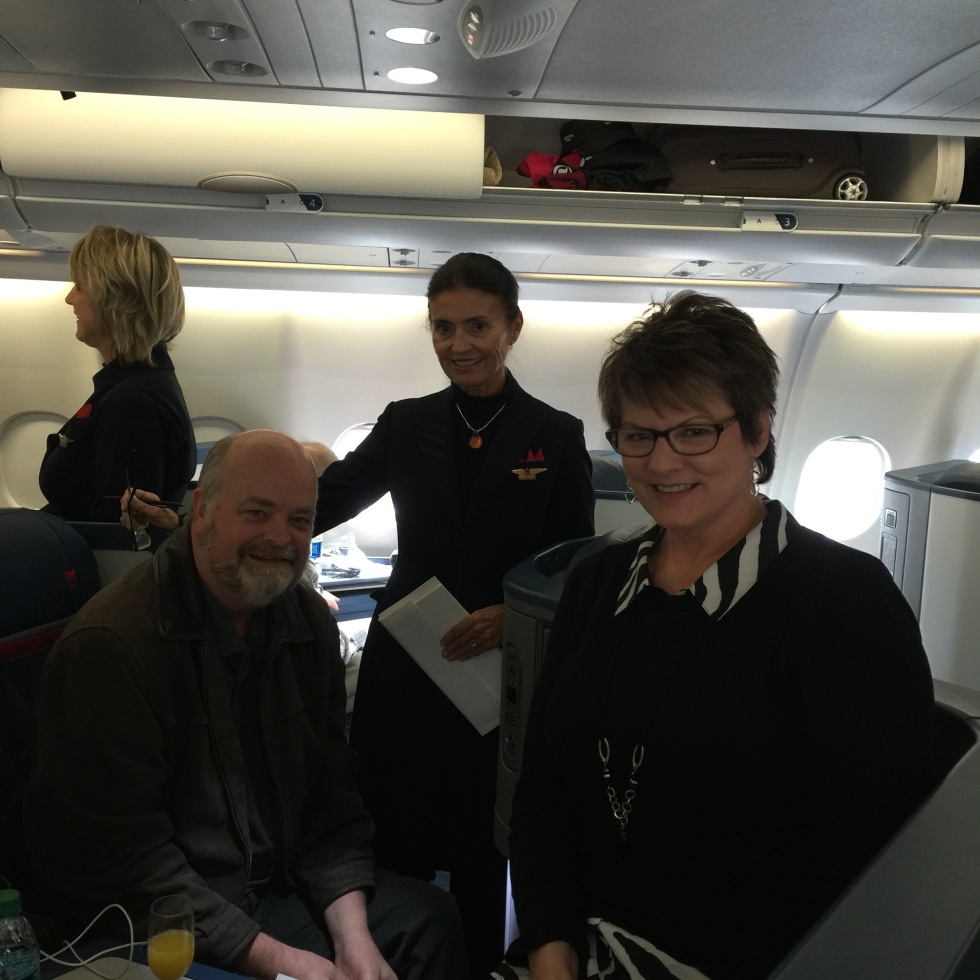 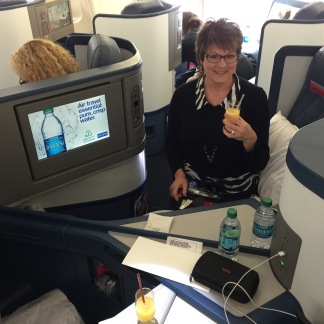 We were fortunate enough to have enough air miles built up over the years to make it a First Class flight. Which meant mimosas in the morning and a seat that could lay flat for sleeping, plus videos galore and nice meals capped off with a hot fudge sundae. Yeah, we could get used to that.

After one of the longest airplane taxis we’ve ever experienced, going through customs and immigration was a breeze. No lines, no bag checks… almost like landing anywhere in the US. The Amsterdam airport is very modern and beautiful, although navigating the transportation to figure out the best way to get to our hotel made us glad we weren’t in a hurry (especially since I always look for alternatives to cabs).

Pretty much everyone you encounter speaks English, except perhaps tourists from Mississippi. Several encounters have started out in Dutch (which we can tell because of all the “AA’s” and a surprising amount of rolling r’s), which I view as a good thing because that means we don’t necessarily look like big ol’ dumb ‘Muricans, but as soon as you say, “Speak English you stupid Dutch person, can’t you see we’re civilized?” they switch to English right before they punch you in the mouth. Seriously, they switch gears without a hitch and are easy to understand, although the typical American politeness of apologizing for bumping you when they’re passing by gives way to what is probably a more typical European approach of, “I’m not going to acknowledge that because it was nothing to apologize for, you stupid simpering American weenie who needs constant affirmations from complete strangers.” 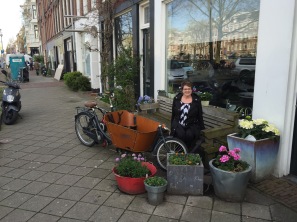 First impressions: As soon as we checked into our hotel and unpacked a little, we went on a walkabout to get a lay of the land and orient ourselves to our location. It’s a pretty city with lots of water. Canals everywhere.

But perhaps the identifiable aspect of the city are the bikes. Bicycles everywhere. And most of them look like the old three speed you had when you were a kid. Nothing fancy here, just two wheels and a couple of pedals. Virtually every sidewalk has a lane intended for both bicycles and scooters. 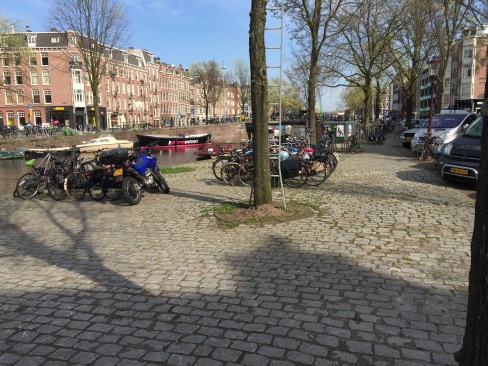 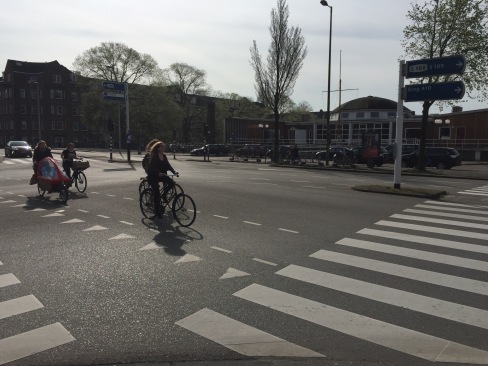 It takes a little getting used to especially when you cross a street. Just when you think you made it without getting hit by a car, you have to remember you’re now in the bike lane, and those suckers come fast. They know they have the right of way wherever they go, so they just zoom around like they’re in a Mario race, daring you to be one of the power ups they run into, except that you’d both lose instead of inheriting a new power.

Tulips and pretty flowers are abundant, as you might expect. We hope to go see some tulip farms and if we’re lucky, maybe some threelip farms later on during the visit.

After walking about, seeing that we’re not very far from “Museum Central” featuring the Can Gogh Museum and Rijksmuseum, we found a little nondescript grocery store and bought some food for the room, which is one of our favorite ways to save money while traveling. We’re not sure if all downtown Amsterdam grocery stores are similar, but it felt more like a close-out discounter than a grocery store, with stuff piled pellmell in bins and not a lot of rhyme or reason to the layout (you have to admit, no one does in-store marketing like Americans). Still, some apples, salami, an aloe vera drink, some bread, chips, and cheese plus a very tasty prepackaged confection called “choco wafels” –which beats Li’l Debbie and Hostess all to hell in the yummy snack department– all for less than $10 US, pretty much feeds us for the night and maybe the morning. Yes, you can travel cheap in Europe if you’re not proud or picky.

During our walkabout we walked past a store window featuring a scantily-clad mannequin, oh wait, no that was no mannequin, that was a real live prostitute advertising herself in the window! (Does that mean I should have called it a womannequin?) Anyway, it wasn’t even the red light district, although it might’ve been on the border of it, we’re not sure. In the end, so what, who cares. We’re not in the market for a hooker so it was like passing a window display full of Dell Computers. Except maybe a little better looking and they probably don’t do Windows.

Anyway, so much of Amsterdam’s reputation at least in the US is: “hookers and pot.” We saw what might’ve been a pot shop and a couple of women in their underwear in the window, but otherwise, that’s not what this city is all about at all, any more than pot shops define or dominate Portland or Seattle.

So, after being up all night and wandering around the city getting our bearings, it’s back to the room for a nap. Hopefully we’ll be able to sleep through the night and wake up loaded for bear. We’re going to figure out our itinerary for the next three days and otherwise chill out and acclimate. Welcome to Holland, us!

3 thoughts on “Kevin and Carolyn Do Europe”