Our recounting of the top castles in Luxembourg was rudely interrupted by a post about taking a walk. My apologies. But in this age of the coronavirus, nothing is more important than getting out for a walk. Now get out there (but stay away from everyone!), exercise those legs, and then come back to this blog. Now. Get out. Really. You’re becoming a potato. This will still be here when you get back. Go on! Shoo!

Done? Now, don’t you feel better? Okay then, you can sit in that chair for the rest of the day, totally guilt-free. You can’t tell me baldsasquatch.com isn’t looking out for your health, in addition to all of our amazing knowledge, trivia, and bad puns we provide. Besides, the truth is that we can’t lose half our readers to one heart attack!

Anyway, I originally used the Top Ten Castles of Luxembourg title because I thought it would be funny if someone searched on that and we came up and someone read it thinking it was written by castle experts. Turns out, when I plug that exact phrase in Google, we are now currently the top hit on the second page! Woo hoo! I better pull my doctorate in Medieval Construction and Castleology credentials out again!

I’m gonna lead with Brandenbourg Castle, just to illustrate the lengths we go to just to inform and entertain you, dear reader. Oh wait, um, except there’s a bit of broccoli in your teeth. You better get that. Anyway, here we are driving down a back road hoping like hell there isn’t a large band of forest people around this bend who hate Americans that live in Portugal. Or maybe they just hate rental cars. You never know.

After an arduous journey through an area that would feel like home to any hillbilly from Deliverance, we finally found this gem. That is, as long as you think a gem is a piece of petrified squirrel poop.

Oh, well, such is the life of a Professional Castle Hunter.

Anyway, blame its ruinous state on the French. In 1668, they attacked the castle, which subsequently fell increasingly into ruin. It is now owned by Luxembourg, but I’m guessing they might be willing to listen to some offers.

And now on to:

One of the coolest castles we saw in Luxembourg was Larochette Castle. Here we see the castle from the other side of town, on a viewpoint that must have been designed solely to provide one with a great view of the castle, and rooftops. 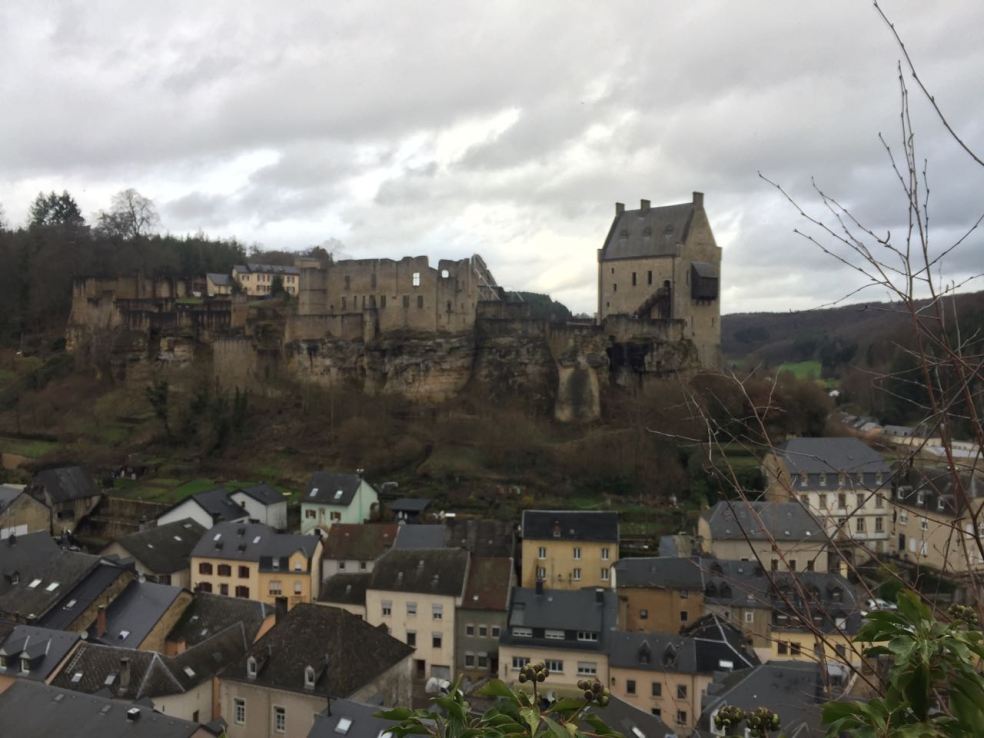 Built in the the 11th century, the castle was destroyed by fire at the end of the 16th century. Once the fire insurance paperwork is settled I’m sure they’ll get around to rebuilding more of it.

We couldn’t get inside, but a walk around it revealed some fascinating scenes. Talk about livin’ on the edge! 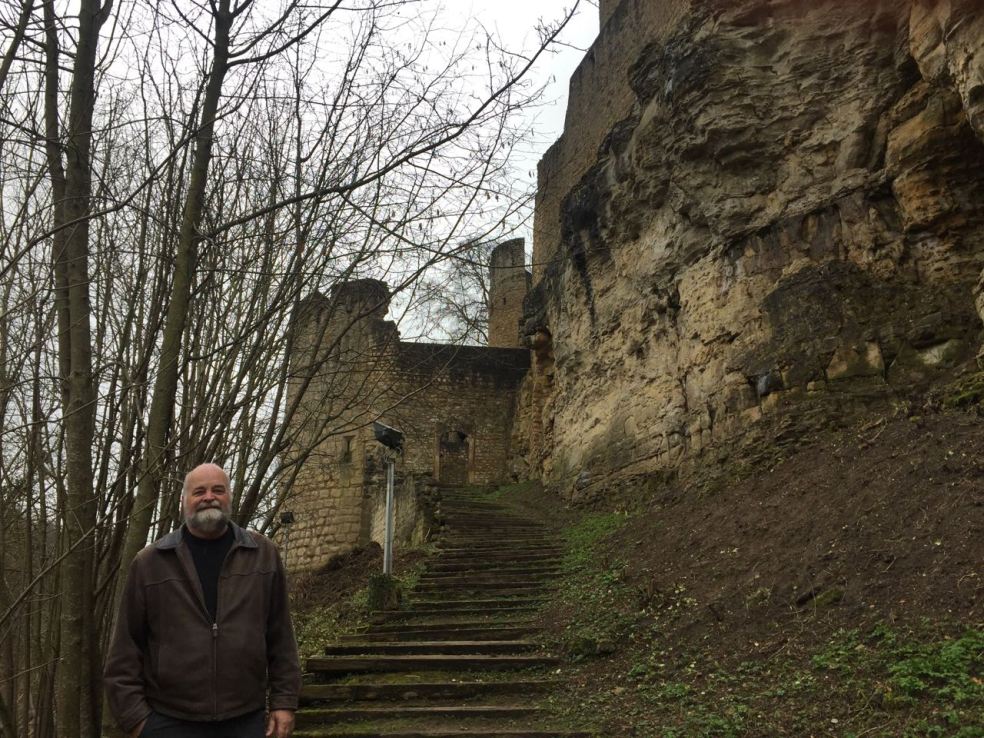 A stairway to Kevin. 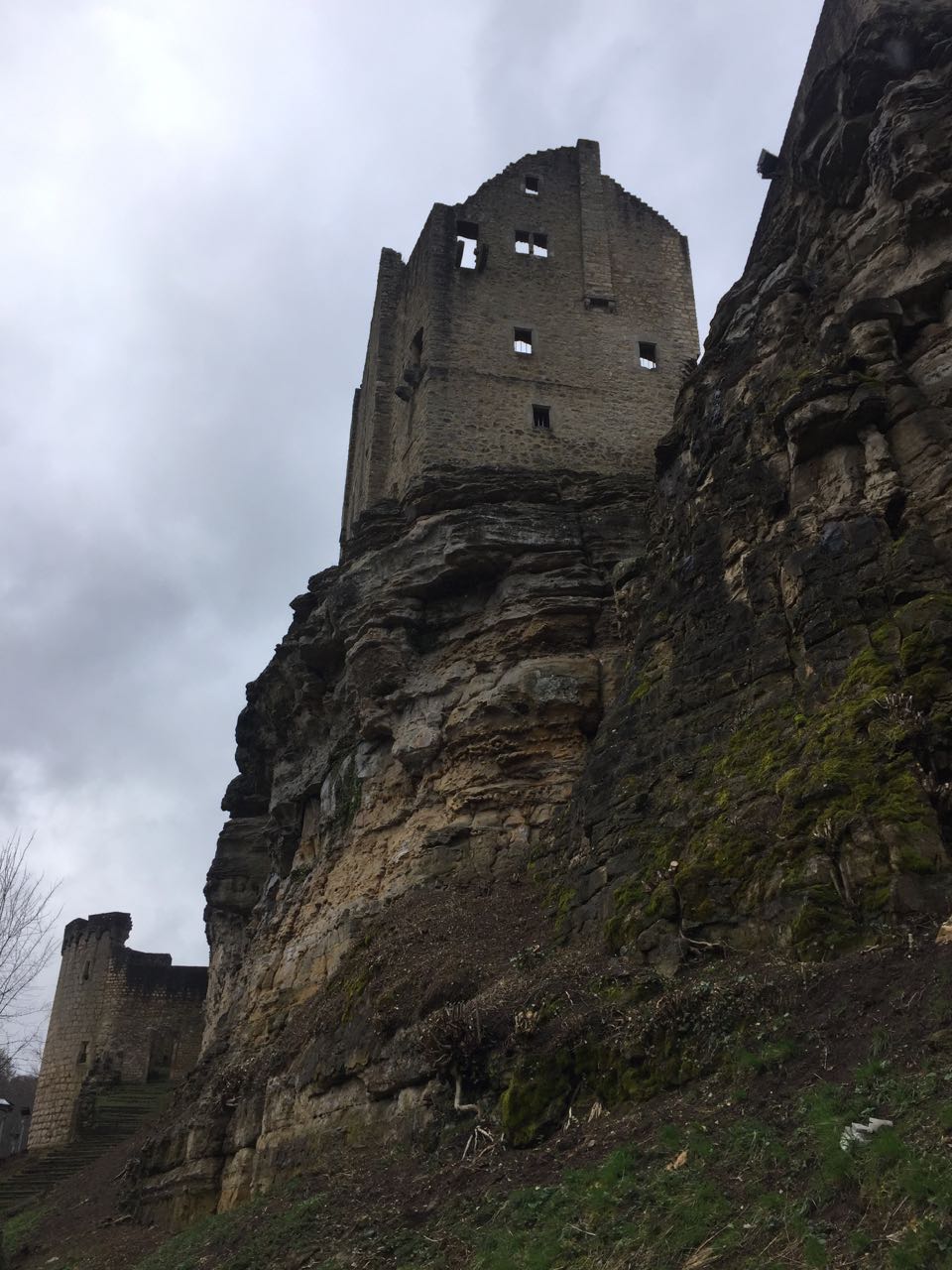 You’d think someone back then would’ve stared at this cliff for a while, chin in hand, and mused aloud to the architect, “Yer thinking maybe that cliff will be staying put then?” Apparently so, because almost 1,000 years later, the cliff is doing just fine, thank you, while the house above now features plenty of natural air conditioning.

We thought it was just an old ruin you couldn’t get into. Turns out that Castle Hunting should not be a late winter pastime. This castle, like so many others we drove up to, is closed from October until Easter. Doh! 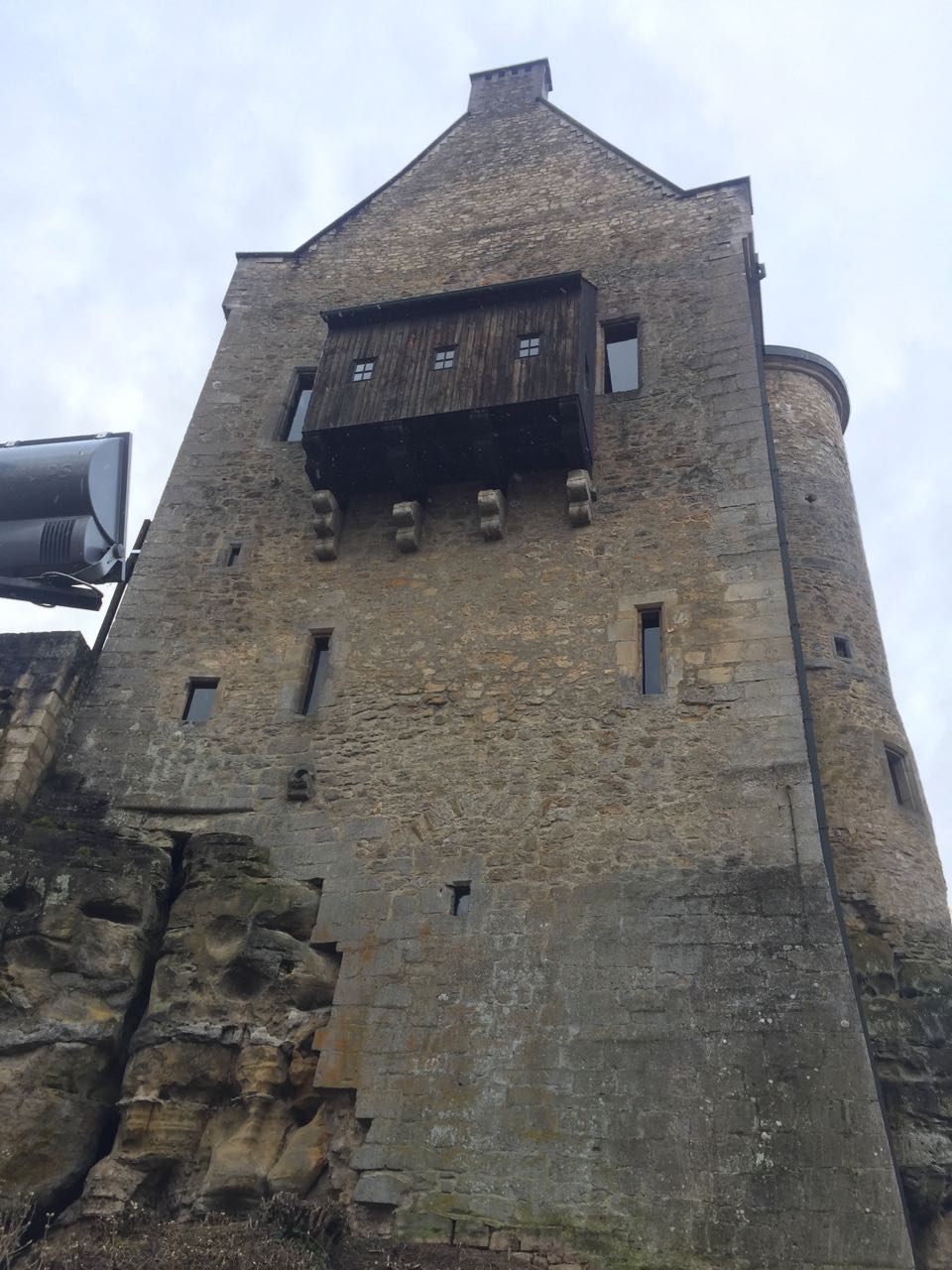 This is the Verlorenkost watchtower (which literally translates to “Lost Food”- honestly, Google it under German if you don’t believe me). The reason for that name is that there’s a legend that a cook was carrying pots full of food when she stumbled, breaking them all and ruining the food. Seriously. You can’t make this stuff up. Well, I can, but you can’t. And I didn’t this time. Next time I probably will though.

Behind these natural columns are doorways that lead into a secret dungeon where the Duke of Larochette used to keep his stores of chocolate bars, fortified wine, and girlie magazines out of sight of the Duchess. Okay, you see the difference? I made that one up. Everyone knows they didn’t have chocolate bars back then.

Some people mistakenly believe that the actor John Larroquette was descended from the folks who built this castle. We’d like to put those rumors to rest right now. We know his ancestors had nothing to do with the castle because we just made it up. So sue me in Night Court.

This little fella began following us all around the castle. He was one of the friendliest cats we’ve ever encountered, aside from being a gorgeous, albeit very well fed, specimen. Plus his expression is perfect to place right next to any one of my bad jokes.

In fact, watch this, see how it works:

What did the janitor say when he jumped out of the closet? 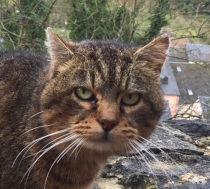 See how that works?

Okay, so we got to two more of the castles, and now I’m wiped out. This quarantine stuff really wears you out! After my nap, I’ll think about doing the next entry in a couple weeks, when I’m rested up again.

Okay cat, that’s enough. You don’t have to give us that look every time I try to be amusing!